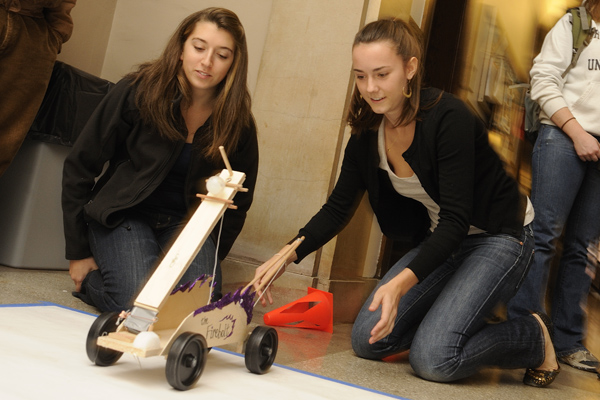 Some were short and stocky, others broad and brawny. Some were stripped down to their essentials, others gussied up with glittery decoration. But all the student-built balsa wood and foam-core cars had one thing in common: The directive to be powered by no more than two mousetraps and six rubber bands. Their goal: to deliver a small, free-standing “flag” (actually a one-and-a-half-inch plastic ball, weighted internally with silicone so that its three-inch plastic flagpole always pointed upward) to a specific point on a three-dimensional course. The cars’ drivers were teams of students in a Whiting School of Engineering course called Freshman Experiences in Mechanical Engineering.

At stake for the winners in the five-round, single-elimination tournament called Plant Your Flag was “the adoration and green-eyed envy of their peers for their remaining three years,” said course instructor Lester Su, an assistant professor in the Department of Mechanical Engineering. “For the rest, so will begin the Sisyphean struggle to extricate oneself from a morass of ignominy. Fun times.”

The design competition was held on Dec. 7 in the first-floor hallway of Homewood’s Latrobe Hall.

The winning car, Su said, was a seemingly complicated yet well-executed design that drove into place, positioned the flag over the target on the end of a swinging arm, then released the flag gently. “It wasn’t the fastest car but nevertheless defeated its opponents by its sheer precision and reliability in placing the flag exactly on the target each time,” he said.

All freshman mechanical engineering students—this year, there are 60—are required to take the course. The design project varies each year but always includes the use of rubber bands and mousetraps as energy sources.

“The students get to be clever in conceiving their designs,” Su said, “but more than that, they learn the basic engineering value of designs that can be built to perform reliably, the importance of testing and the benefit of pooling the talents of a team.”