Sonneborn Collection of Judaica to be used for research and teaching 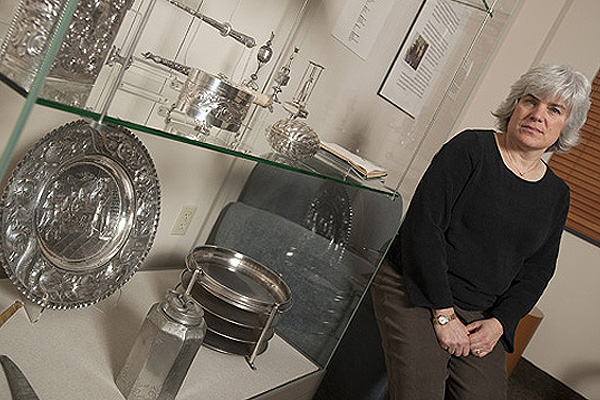 Dozens of Jewish ceremonial pieces, most of them silver, had been dispersed in Baltimore and were recently returned to Johns Hopkins, where they are housed in the Smokler Center for Jewish Life. At right, Hillel director Rabbi Debbie Pine. Photo: Will Kirk/Homewoodphoto.jhu.edu 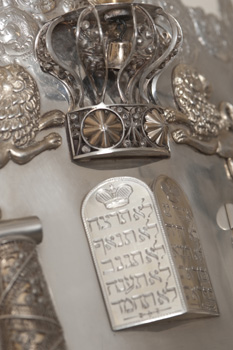 A detail of a breastplate that would adorn a Torah. It is one of 20 pieces that have been assembled into the exhibition titled ‘The Sonneborn Collection of Judaica.’ Photo: Will Kirk/Homewoodphoto.jhu.edu

Sonneborn wanted the approximately 95 objects to be used for research and teaching at the university, and put on display for the public. Johns Hopkins held up its end of the bargain for nearly 16 years, until the items inexplicably would be placed in storage for decades. For the past 50 years, the collection has been scattered, the bulk of it out on loan to a local synagogue.

This past November, however, nearly 20 pieces of the Sonneborn Collection returned to Johns Hopkins. This spring, the balance of the collection will follow and Sonneborn’s original vision can be realized.

The Sonneborn Collection is being exhibited on the third-floor landing of the Smokler Center for Jewish Life in the Harry and Jeanette Weinberg Building, the home of Hopkins Hillel, located at 3109 N. Charles St.

The permanent exhibition came as a result of collaboration between Hopkins Hillel and three university programs—the Leonard and Helen R. Stulman Program in Jewish Studies, the Program in Museums and Society, and the Cultural Properties Program of the Sheridan Libraries.

Jackie O’Regan, curator of cultural properties, said that she learned of the existence of the collection in 2006, when she was curator of Evergreen Museum & Library. When O’Regan assumed her current position in late 2007, she brought the collection to the attention of Elizabeth Rodini, director of Museums and Society.

“One of my responsibilities is to connect cultural objects with appropriate faculty and programs of study, and also making sure all of our loans are up-to-date,” O’Regan said. “This particular loan was long overdue.”

O’Regan and Rodini agreed that something should be done to bring these objects back to Johns Hopkins, especially given the recent creation of a Jewish studies program at the university. The pair approached Steven David, director of Jewish Studies and vice dean for centers and programs. He, too, agreed that the Sonneborn Collection needed to reunite with Johns Hopkins.

First, they had to locate the objects. David said that required some basic detective work.

“The collection had been scattered and, in a larger sense, forgotten,” David said. “We had to find out what became of Sonneborn’s donation.”

Sonneborn, the owner of Henry Sonneborn & Co., once the largest clothing factory in the world, had originally wanted to create a “handsome museum of art antiques” at Johns Hopkins.

In 1916, the collection was relocated to the university’s new Homewood campus, just three years before a fire destroyed McCoy Hall. Some records claim the objects also resided in Evergreen House for a short period. Then, for some unknown reason, the objects went into storage.

In 1960, the Sonneborn family requested that the collection be loaned out indefinitely to the Baltimore Hebrew College (later University), as Johns Hopkins was not using it for its intended purpose. Henry Sonneborn Jr. would later make additional contributions of Judaica to his father’s collection. In 1983, the bulk of the objects were transferred to the Sonneborns’ synagogue, Temple Oheb Shalom, located near Baltimore Hebrew College, so they could be properly maintained and displayed.

The pieces have since graced the lobby of the synagogue and, on occasion, been employed in ritual.

Rodini said that Temple Oheb Shalom leaders were immediately agreeable about the prospect of Johns Hopkins reacquiring the collection. “They especially liked the fact that students would be working with the objects,” Rodini said. “They also appreciated the original purpose of this collection.”

A student in the Museums and Society Program, Sarah DePaolo, expressed interest in the objects and, with fellow student Suzanne Gold, applied for an Arts Innovation Grant to curate a handpicked portion of the collection. The two put together the Smokler Center installation, which was dedicated on Nov. 6.

The exhibition, called “A Handsome Museum: Selections From the Henry Sonneborn Collection of Judaica,” features 20 of the finest objects in the collection, including a late-19th-century silver Torah breastplate, a silver and gold kiddush cup, a silver spice box dating back to 1864 in Russia, brass Hanukkah lamps from Eastern Europe and three shofars (rams’ horns). The items, which have been cleaned and polished, are housed in a museum-quality display case donated by the Jewish Studies Program.

The current exhibition is focused on the history of the collection and how and why it returned to Johns Hopkins. O’Regan said that the timing had a lot to do with the confluence of factors, specifically the creation of Jewish Studies and her position as curator of cultural properties. “And we had this relatively new Museums and Society Program and the Smokler Center, Hillel’s first permanent home,” she said.

The plan is for the Sonneborn Collection to be a rotating exhibit, O’Regan said. Currently, Gold, a senior Writing Seminars major, is working on a second installation, which might focus on the ritualistic use of the objects themed on the five senses.

Gold said that she has relished the opportunity to work with this collection.

“As a student curator, I am able to interact with the objects in a really unique way, exploring how a collection of such prestige and age can remain relevant and intellectually engaging to students in a modern university setting,” she said. “The Sonneborn Collection has also become the centerpiece for an open dialogue, providing one of many opportunities in the Jewish community at Hopkins for discussion about Jewish cultural heritage and ceremonial tradition.”

Rodini said that she wants to keep the Sonneborn Collection “alive” through new interpretations of the objects by allowing students to present their own points of view through curatorial expression and exhibition. She adds that very little is known about the history of the individual pieces.

“We’d like there to be fluidity with the collection and the objects to be installed,” Rodini said. “I would hope that other students express interest in this conservation effort and [that] we can eventually curate all the objects.”

To date, roughly 75 pieces of the original collection have been located, O’Regan said, the majority of them at Temple Oheb Shalom. The fabric pieces likely did not survive, she said, while other objects might have been lent to individuals or community groups.

“We are trying to locate as much as we can,” she said. “While we appreciate its ceremonial use, Mr. Sonneborn didn’t give us the collection for religious purposes. He gave it for study.”

Rabbi Debbie Pine, executive director of Hopkins Hillel, said that the collection has become a “great access point” for both Jewish and artistic study, and that the exhibit attracts a lot of attention from visitors.

“At Hillel, we strive to engage students in multiple ways. Some are drawn to prayer, some to learn about Israel, some to socialize,” she said. “We see the Sonneborn Collection as another avenue in which to get students involved in Jewish life. And it’s also a way for students who might be pre-med or engineering majors to engage in art. It’s a tremendous honor for us to host this incredible and beautiful collection.”