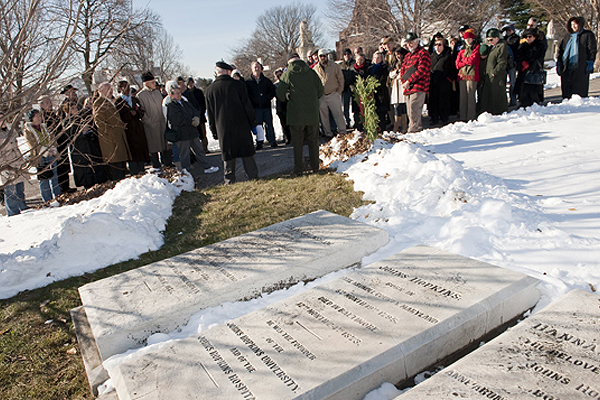 Since Dec. 24, 1973, the 100th anniversary of the death of Johns Hopkins, members of the university and hospital communities that bear his name have gathered at his simple grave site in Green Mount Cemetery to remember the generosity of their benefactor. Joined at the brief, informal ceremony by appreciative members of the public, the assembled hear a few words from a Hopkins family member, historian or other expert; sometimes offer observations of their own; and traditionally leave pennies on his tombstone while saying thanks and making a wish.

At this year’s Christmas Eve day service, which fell after the season’s first big snowfall, attendees lined a cleared road to hear from Matt Crenson, professor emeritus of political science and faculty director of the university’s Baltimore Scholars Program, about what Baltimore was like circa 1873.

At the time of Johns Hopkins’ death, his $7 million estate—which was to be divided in equal parts to establish a university and a hospital—was the largest philanthropic bequest in U.S. history. In the ensuing years, his beneficence has literally changed the lives of millions.