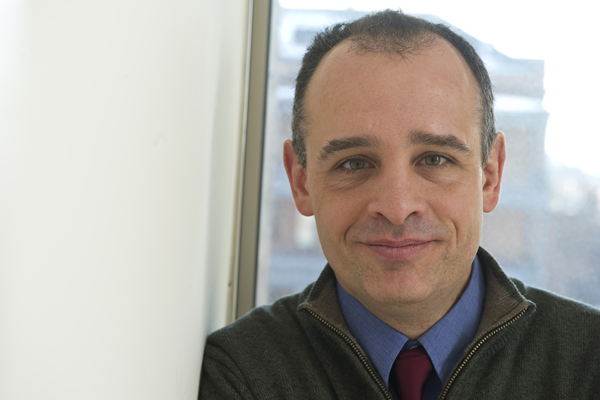 Christopher Celenza, a professor in the Department of German and Romance Languages and Literatures, will head the American Academy in Rome for three years. Photo: Will Kirk/Homewoodphoto.jhu.edu

The American Academy in Rome recently named as its director Christopher Celenza, a professor in the Department of German and Romance Languages and Literatures and director of the Singleton Center for the Study of Pre-Modern Europe, both in Johns Hopkins’ Krieger School of Arts and Sciences.

Celenza’s three-year term will begin in July, and he will return to his posts at Homewood upon its conclusion. Celenza will be the 21st director of the 115-year-old academy, one of the leading American overseas centers for independent study and advanced research in the fine arts and the humanities.

“I am honored to be able to serve the American Academy in Rome, an institution I, like many others, deeply admire,” Celenza said in an announcement from the academy. “Its integration of the arts and humanities, its central place in what has long been one of the most cosmopolitan cities in the world and its rich tradition of fostering the work of Americans abroad fill me with inspiration.”

The directorship will be Celenza’s third tour with the American Academy in Rome. He was a Rome Prize Fellow from 1993 to 1994, and he served as director of its Summer Program in Applied Palaeography from 2002 to 2005. He said he knows firsthand the influence the academy can have on a scholar.

“My own fellowship year changed my life. It helped form not only the scholar that I am but also the person,” Celenza said. “For these and many more reasons, I am delighted to return. I look forward to continuing the work of the directors who have come before me; to collaborating with the academy’s president, Adele Chatfield-Taylor, and its outstanding trustees; and to working with the academy’s staff in Rome and New York, all toward the shared end of helping this wonderfully unique community continue to thrive.”

“This is a wonderful and well-deserved honor for Professor Celenza,” said David Bell, dean of faculty in the Krieger School. “I’m delighted that such a distinguished member of our faculty will be taking over the American Academy in Rome.”

A historian and Latinist who studies European intellectual history, Celenza holds two doctorates: in history, from Duke University, and in classics and neo-Latin literature, from the University of Hamburg. He has authored a number of articles and books, including The Lost Italian Renaissance: Humanists, Historians and Latin’s Legacy, published in 2005 by Johns Hopkins University Press. The book won the Renaissance Society of America’s 2005 Phyllis Goodhart Gordan Prize, and in 2006 it was issued in paperback and selected as a CHOICE Outstanding Academic Title. Celenza holds secondary appointments in History, Classics and the Humanities Center, all in the Krieger School of Arts and Sciences.

Celenza has held many fellowships, including those from the American Council of Learned Societies (the Burkhardt Fellowship for Recently Tenured Scholars, 2003 to 2004); Villa I Tatti, the Harvard University Center for Italian Renaissance Studies (1999 to 2000); the Fulbright Foundation (1992 to 1993); and the John Simon Guggenheim Memorial Foundation (2008 to 2009). He is also active in the Renaissance Society of America.

The resources of the American Academy in Rome include a library of history, archaeology and art of Rome and of Italy; a photographic archive; and an archaeological study collection. The academy publishes Memoirs of the American Academy in Rome, an annual journal containing articles on classical studies, archaeology, art history and Italian cultural and historical studies from the Middle Ages to the present. Academy events include concerts, symposia, readings and exhibitions, which take place in Rome and the United States and are open to the public.

Chatfield-Taylor, the academy’s president, said that Celenza will bring wonderful breadth and vigor to his new role. “He is enormously intelligent, with a wide-ranging understanding of European history and great warmth and generosity as a person,” she said.

Filed under Around Hopkins, People