Unlocking the key to premature aging in children 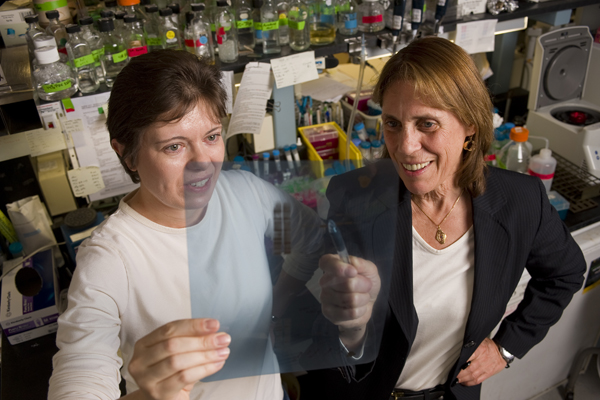 Working with postdoctoral fellow Jemima Barrowman, Susan Michaelis, a professor of cell biology, looks at a film of a gel analyzing the presence or absence of lamin A. Photo: Will Kirk/Homewoodphoto.jhu.edu

Susan Michaelis conducts her research in a traditional laboratory, with beakers and flasks and microscopes strong enough to allow her to view and manipulate the infinitesimally small nuclei of cells.

Even so, the living, breathing human beings that stand to benefit from this Johns Hopkins scientist’s work are never far from her mind.

Michaelis’ research is dedicated to finding the causes of and treatments for a disorder known as Hutchinson-Gilford progeria syndrome, or HGPS, commonly called progeria. Children born with progeria seem normal at birth, but by the time they reach their first birthday, they begin to age at a shockingly rapid rate. By the time they are 8 or 9 years old, these children resemble old people and suffer from a host of problems that normally afflict the elderly, including joint and bone difficulties, loss of hair and body fat, and cardiovascular issues. According to Michaelis, by the time they reach 13, most children with progeria die of blood vessel disorders.

Every few years, Michaelis has the opportunity to meet and mingle with children with progeria and their parents at a meeting sponsored by the National Institutes of Health and the Progeria Research Foundation, the leading research and advocacy group for the disease.

“It’s been very motivating for me and the individuals who work in my laboratory to meet children with this disease and to hear what it is like to live with,” said Michaelis, a professor of cell biology in the School of Medicine. “These children are quite amazing. On one hand, they are just ordinary, delightful children. But on the other, they are unusually wise, thoughtful and mature. There is something uniquely compelling and inspiring about them, probably due to the fact that they have to confront their mortality in a way that most of us don’t.”

Using a $325,000 National Institutes of Health grant supplement, administered by the federal stimulus act, Michaelis and her team are working hard to unlock the secrets of this disease that afflicts more than 50 children in 30 countries. Specifically, Michaelis is investigating the role that a protein known as lamin A plays in the disease.

Michaelis’ investigations are among the more than 300 stimulus-funded research grants and supplements totaling more than $157.4 million that Johns Hopkins has garnered since Congress passed the American Recovery and Reinvestment Act of 2009 (informally known by the acronym ARRA), bestowing the National Institutes of Health and the National Science Foundation with $12.4 billion in extra money to underwrite research grants by September 2010. The stimulus package—which provided $550 billion in new spending, including the above grants—is part of the federal government’s attempt to bring back a stumbling economy by doling out dollars for transportation projects, infrastructure building, the development of new energy sources and job creation, and financing research that will benefit humankind.

The subject of Michaelis’ grant, lamin A, is a protein found in the cell’s nucleus. For years, it was thought that lamin A’s only role was to give the nucleus structural support, in the same way that chicken wire would support a papier-mache sculpture. A decade ago, however, it became evident that mutant forms of the lamin A protein were implicated in a number of diseases, including muscular dystrophies, cardiomyopathies, neuropathies and progeria.

“Our goal is to figure out how mutated forms of lamin A, particularly the lamin A variant that causes progeria, can exert different effects from normal lamin A. Is it by regulating the expression of specific genes in specific cell types? We don’t know, but we are going to find out,” Michaelis said.

The results of Michaelis’ team’s study not only could provide the basis for new therapeutic interventions against progeria and other lamin A–implicated diseases but also could shed light on the normal aging process.

“Understanding the cellular and molecular basis for the premature aging disorder progeria may provide us with a better understanding of the normal aging process and ultimately lead to drug treatments that improve the normal aging process,” she said. “In the long run, the research we are doing could provide important benefits to the health of the human population at large.”