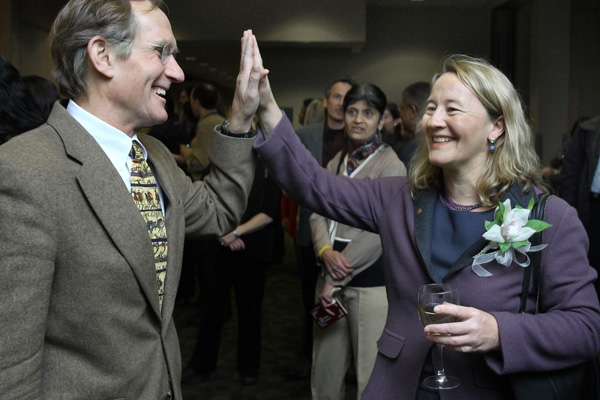 Carol Greider, celebrating her 2009 Nobel Prize in physiology or medicine, is greeted by colleague Peter Agre, director of the Johns Hopkins Malaria Research Institute, who won the 2003 Nobel in chemistry. Photo: Keith Weller

Nearly 800 faculty, students and staff poured into Turner Concourse on Jan. 6 for a reception to honor Carol Greider, who recently returned from Stockholm, where she accepted the 2009 Nobel Prize in physiology or medicine.

Amid unrelenting camera flashes, tributes cited Greider’s humility, passion for science and camaraderie. Speakers were Edward Miller, dean of the School of Medicine and CEO of Johns Hopkins Medicine; university President Ronald J. Daniels; Thomas Kelly, director of the Sloan-Kettering Institute and former Daniel Nathans Professor and director of Molecular Biology and Genetics, who had hired Greider at Johns Hopkins; Janice Clements, professor and director of Molecular and Comparative Pathobiology; and Mary Armanios, assistant professor in the Department of Oncology and the Institute for Genetic Medicine.

Talking about how medical discoveries come from unlikely sources, Greider said that “the Nobel focuses on individuals, but it’s made by lots of other people’s ideas. Thanks to all of you, especially the members of our lab. The interactive environment at Hopkins makes it a joy to come to work.”

After expressing gratitude for the “tremendous turnout,” Greider ended the program with humorous anecdotes about Stockholm and dinner with the king of Sweden.

Greider, the Daniel Nathans Professor and director of Molecular Biology and Genetics in the Johns Hopkins Institute for Basic Biomedical Sciences, shared the Nobel with Elizabeth Blackburn, of the University of California, San Francisco, and Jack Szostak, of Harvard Medical School, for their discovery and work with the enzyme telomerase, which protects chromosome ends. The enzyme was later found to play a major role in cancer cell growth and diseases related to aging.