Legg Mason chair, CEO to give next Leaders & Legends talk

Mark R. Fetting, chairman and chief executive officer of Baltimore-based Legg Mason, one of the world’s leading global asset management firms, will be the featured speaker at the Johns Hopkins Carey Business School’s Leaders & Legends lecture series on Wednesday, Jan. 13. The event will be held from 7:30 to 9 a.m. at the Legg Mason Tower in Harbor East.

Fetting, whose remarks are titled “Global Leadership From Baltimore,” is also a member of the company’s board of directors and serves on the executive committee of the board of governors of the Investment Company Institute and as a director for the Legg Mason and Royce Funds. 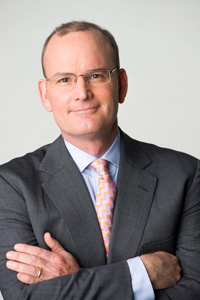 Prior to becoming CEO in January 2008, Fetting was responsible for Legg Mason’s mutual fund and managed account businesses worldwide, including oversight of Legg Mason Capital Management, Royce and Associates, and Clear Bridge Advisors. Since joining Legg Mason in June 2000, he has played a leading role in the firm’s strategic development and major acquisitions, including Royce & Associates, Private Capital Management, Citigroup Asset Management and Permal. Prior to these transactions, he headed Legg Mason’s asset management segment.

Before joining Legg Mason, Fetting ran a major business for Prudential Financial Group, serving as president of Retirement Services. As a senior officer at Prudential, he also played a leading role in the transformation of the firm’s overall money management business. Prior to his career at Prudential, Fetting specialized in business management and strategy for money management firms, serving as a partner at Greenwich Associates and as a vice president at T. Rowe Price. He began his career at Citibank, NA, as a commercial lending officer.

Long active in public service, Fetting is a founding director of the Fund for Educational Excellence and of Project Raise, and currently serves on several boards, including those of the Baltimore School for the Arts, Mercy Hospital and the Gilman School.

Fetting holds a bachelor of science degree in economics from the University of Pennsylvania’s Wharton School and an MBA, with distinction, from Harvard Business School.

The Leaders & Legends monthly breakfast series, which features today’s most influential business and public policy leaders addressing topics of global interest and importance, is designed to engage business and community professionals in an examination of the most compelling issues and challenges facing society today.

Admission to the lecture, which includes breakfast, is $35. To register and for more information, go here