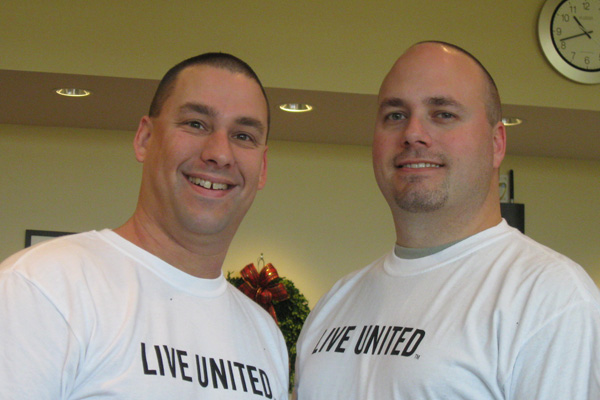 The Johns Hopkins community raised more than $2.1 million for the United Way of Central Maryland, topping the goal by nearly $100,000

Despite a still-recovering economy and a general downturn in corporate giving, employees and students of the university and Johns Hopkins Medicine pledged more than $2.1 million to the 2009 United Way of Central Maryland campaign, topping the overall goal by nearly $100,000.

More than $240,000 of the total was pledged to the Johns Hopkins Neighborhood Fund, which supports agencies that serve communities in close proximity to Johns Hopkins campuses and have a strong relationship with the university and its employees.

The Neighborhood Fund, now in its third year, was the second-largest designated organization of Johns Hopkins donors—behind only United Way of Central Maryland—and was one of the top five recipients of designated pledges across all United Way of Central Maryland campaigns. A committee representing a cross section of Johns Hopkins employees will meet later this month to allocate the funds.

The overall $2,154,931 raised—an increase of nearly $50,000 over 2008—represents a total for contributions from all university divisions except SAIS, whose donations are reported to the National Capital Area campaign in Washington, D.C., and the Applied Physics Laboratory, which no longer publicly reports its financial goals and results. The combined university/Johns Hopkins Medicine financial goal for the 2009 campaign was $2,060,000.

Michael Klag, dean of the School of Public Health and the university’s United Way chair, said that he had immense pride in Johns Hopkins’ efforts in this campaign.

“We surpassed our goal, which is always great, but especially in this economic climate where we all feel stress, I feel people really stepped up to the plate. They realized that there are many vulnerable people in the community who need our help, and the stress that we feel is magnified many times over for people who are lower down on the economic ladder,” Klag said.

Klag lauded the work of the JHU United Way leadership and the divisional coordinators, ambassadors and staff who rolled out the campaign. In particular, he praised Jeff Pratt from the Office of Work, Life & Engagement, which oversees the JHU United Way campaign.

“Jeff is really committed to United Way,” Klag said. “He’s the most optimistic guy I know, and that optimism just pervades the whole campaign.”

Pratt, too, extolled the work of the divisional coordinators and ambassadors.

“This was a tough year to raise money, and they took it as a challenge,” Pratt said. “They made sure to get people involved with fun events or contests, or just getting in front of people at meetings.”

United Way of Central Maryland supports human service agencies in Baltimore City and its five surrounding counties. With donations still filtering in, $1,274,790 has been pledged to the university’s campaign, which kicked off Oct. 14 and officially ended Dec. 18.

Several of the university’s 15 United Way designated units far exceeded their goal. Of special note in this year’s campaign, the School of Education bested its goal by 33 percent, raising $17,684 with a 35 percent participation rate. The Carey Business School led the way in terms of participation, with a 43 percent rate.

Several units significantly increased their level of giving from a year ago. The Johns Hopkins University Press leadership offered 25 percent in matching donations, which resulted in $15,000 in donations, up $7,000 from the previous year. University Administration donated $120,000, nearly a fourth more than last year.

The overall university participation rate was 18 percent, up a percentage point from 2008.

Stephanie Reel, chief information officer and vice provost for information technology and chair of the Johns Hopkins Medicine campaign, sent out a letter to the JHM community just prior to the holidays thanking them for their generosity and heartfelt efforts. Reel took the time to remind those who gave why it was so important.

“United Way of Central Maryland provides a way to give back to our neighbors. It provides us with a mechanism by which we can give to those who need it most, in a truly united way,” Reel said. “When we give generously, we send a message to our community, to our city and to our state—a message that only a place as amazing as Johns Hopkins can send. We are Johns Hopkins, and we have sent a clear message that we care about the community we serve.”

The 2009 United Way of Central Maryland campaign, whose theme was “Whatever You Can Give, Gives Hope,” focused on funding nonprofit organizations that provide assistance in the Live United program areas of education, income and health services. In addition to the Neighborhood Fund, Johns Hopkins employees were able to donate all or part of their gift to United Way of Central Maryland, a specific agency or one or more of the Live United areas.

This year’s campaign featured a slew of activities intended to raise awareness and encourage donations. Along with the seventh annual Chili Cook-Off and Bake-Off, events included a Furry Faces Pet Photo contest and a Hopkins Hold ’em card game sponsored by Homewood Student Affairs, cookbook sales hosted by the Sheridan Libraries and a “we’ll shave our heads” challenge by two Homewood staff members. Paul Jacobus, building administrator for Mason Hall, and John Birney, a senior admissions officer with the Office of Undergraduate Admissions, told their Mason Hall colleagues that they would shave their heads if the building’s staff raised more than $1,000. They did, and off came the hair.

Mark Furst, president and chief executive officer of United Way of Central Maryland, said that Johns Hopkins remains a pillar of the overall campaign and an inspiration for other organizations.

“Throughout the long history of the Johns Hopkins Institutions, caring and compassion have been the ethos of the faculty, doctors, nurses, administrators, scientists and other employees,” Furst said. “At a time when so many people around us are still struggling economically, it is especially noteworthy that Johns Hopkins employees pledged more money to help others through United Way than at any other private sector business in the state of Maryland.”

Although the campaign has officially ended, donations are needed and welcome all year. To make a pledge, or for more information on the campaign, go to: www.jhu .edu/unitedway.