A step closer to treating memory loss in age-related diseases 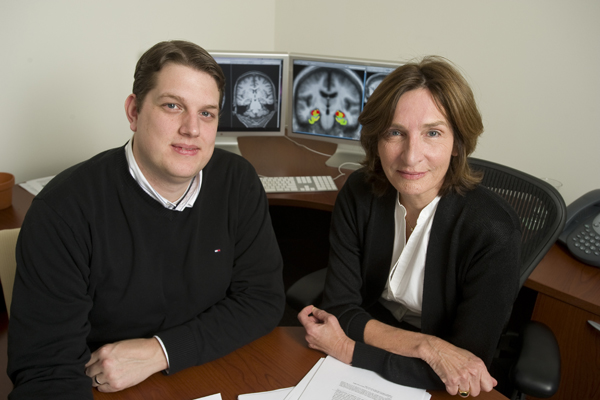 Michela Gallagher, right, and Arnold Bakker will test in humans an existing drug that has been shown to improve the ability of memory-impaired rats. Photo: WIll Kirk/Homewoodphoto.jhu.edu

Michela Gallagher has spent more than two decades trying to solve the mysteries of the aging brain. What happens to our gray matter as we get older? How—and why—do those changes occur? And, perhaps most importantly, what strategies and approaches might help treat—or, eventually, even prevent—memory loss in age-related diseases such as Alzheimer’s and other dementias?

Now, using a $1.3 million National Institutes of Health grant underwritten by the federal stimulus act, Gallagher and her team are about to embark on one of their most important studies yet: determining whether a medication commonly used to treat seizures can help improve memory and brain function in adults suffering from mild cognitive impairment, or MCI, a common precursor to full-blown Alzheimer’s disease.

In a groundbreaking previous study, Gallagher’s team showed that the drug, levetiracetam, markedly improved the ability of memory-impaired laboratory rats because it apparently had an impact on “excess brain activity” in the rats’ key memory systems. The research team knew that excess brain activity is also seen in the same memory system in MCI patients, leading them to hypothesize that levetiracetam could work for humans, too.

“The results of this study could, potentially, help people very significantly and directly,” said Gallagher, a Krieger-Eisenhower Professor in the Department of Psychological and Brain Sciences in Johns Hopkins’ Krieger School of Arts and Sciences. “If the drug works as well in humans as it did in our animal studies, we potentially have a widely used medication with few side effects that could treat elderly people with early memory problems.”

In addition, the study results will illuminate how the drug works and shed light on how human memory function fails in the aging brain, according to Gallagher, who is working on the project with fellow professor Craig Stark, now at the University of California, Irvine, and their student Arnold Bakker, at Johns Hopkins. Greg Krauss, a neurologist at the Johns Hopkins School of Medicine who has studied levetiracetam in research on epilepsy, is overseeing the clinical trial. The stimulus money allowed Gallagher to make two additional hires: one full-time research assistant and a full-time research coordinator, who will be with the team for the entire two-year project.

Gallagher’s study will test healthy adults (as controls) and participants with memory difficulties greater than would be expected for their age. Each person, between 50 and 85 years old, will participate in a sequence of two treatment phases, each lasting two weeks, during which they may receive drug or placebo. After two weeks of the treatment, Johns Hopkins researchers will evaluate the subjects’ cognition using memory tests and conduct functional magnetic resonance imaging sessions to map brain activity.

Gallagher explained that this design allows comparisons to be made of each person’s status both on and off the drug. Participants in the study will come from the Alzheimer’s Disease Research Center at the Johns Hopkins School of Medicine and other referral sources.

“The ARRA program supporting this study has the apt acronym ‘GO grant’ standing for ‘grand opportunity,” said Gallagher, “which it truly is for our work, allowing us to see whether the science in an animal model of aging bridges successfully to humans.”

Gallagher’s team’s investigations are among the more than 340 stimulus-funded research grants and supplements totaling more than $160.3 million that Johns Hopkins has garnered since Congress passed the American Recovery and Reinvestment Act of 2009 (informally known by the acronym ARRA), bestowing the National Institutes of Health and the National Science Foundation with $12.4 billion in extra money to underwrite research grants by September 2010. The stimulus package—which provided $550 billion in new spending, including the above grants—is part of the federal government’s attempt to bring back a stumbling economy by distributing dollars for transportation projects, infrastructure building, the development of new energy sources and job creation, and financing research that will benefit humankind.