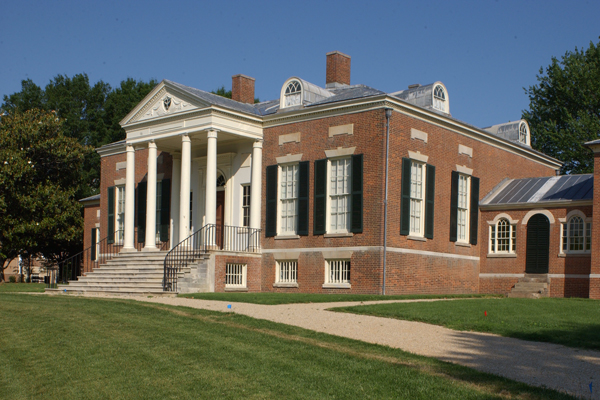 Funded by a grant from the National Park Service, an extensive conservation project will repair and stabilize Homewood Museum’s identity-defining south portico.

Homewood Museum at The Johns Hopkins University has been awarded a Save America’s Treasures grant to support the conservation and preservation of its south portico.

“This grant support will make it possible for Homewood to undertake an extensive conservation project to repair and stabilize the identity-defining south portico, from its elaborate and delicate composition and carved wood ornament to the marble steps and tiled porch deck—even the wrought-iron railings, which are believed to be original,” said Catherine Rogers Arthur, director and curator of Homewood Museum. “It is a complex and comprehensive project that is not only cosmetic but structural in scope. We would not be able to tackle such a project without this important support from the Save America’s Treasures grant program.”

“We are very pleased to have received this award,” said Winston Tabb, Sheridan Dean of University Libraries and Museums. “Homewood is an American treasure here in the midst of our urban landscape, and our staff and JHU students are proud to continue to share it with the public and to interpret the important story of the Carroll family who lived here.”

Homewood Museum was one of 41 grant recipients nationally from a pool of 402 applications. The awards totaled $9.5 million.

Homewood is a rare surviving example of the suburban villa building type, which emerged in Baltimore at the beginning of the 19th century for residential summer retreats. It was built beginning in 1801 on a 130-acre farm located two miles from the city center of Baltimore. The house and property were a wedding present in 1800 from Charles Carroll of Carrollton, one of four Maryland signers of the Declaration of Independence, to his only son, Charles Carroll Jr., and his daughter-in-law, Harriet Chew Carroll.

“Save America’s Treasures invests in our nation’s irreplaceable legacy of buildings, documents, collections and artistic works,” said first lady Michelle Obama, honorary chairman of the President’s Committee on the Arts and Humanities, in a statement about the grants. “These awards empower communities all over the country to rescue and restore this priceless heritage, and ensure that future generations continue to learn from the voices, ideas, events and people represented by these projects.”

In recognition of its historical significance and rare state of conservation, Homewood Museum has been the recipient of significant grants and bequests in past years from noted supporters, including the France-Merrick Foundation, the Maryland Historical Trust, the Charles Carroll of Carrollton Foundation and the Maryland House and Garden Pilgrimage, as well as from generous private donors.

As a teaching museum of Johns Hopkins, Homewood Museum provides curricular support to faculty and offers credit-bearing courses and internships to help meet the university’s academic mission. The museum also welcomes members of the public to experience its collections and special exhibitions, as well as to enjoy its tours, lectures and other programs.

Acceptance of the Save America’s Treasures grant requires that Homewood Museum raise a dollar-for-dollar nonfederal matching share. For more information on the project and how interested parties can help, call 410-516-6710 or e-mail Rosalie Parker, development coordinator for the Johns Hopkins University Museums, at rosaliep@jhu.edu.

Additional information on the Save America’s Treasures program can be found on the President’s Committee on the Arts and Humanities Web site at www.pcah.gov and on the National Park Service Web site at www.nps.gov/history/hps/treasures.