When Johns Hopkins announced that it was bringing a car-sharing program to Baltimore, Brenda Armour was ready. 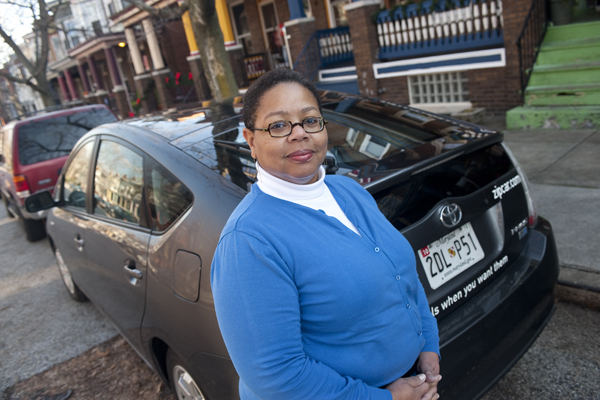 Brenda Armour and her favorite Zipcar: a Prius named Parlett. Photo: Will Kirk/Homewoodphoto.jhu.edu

When Johns Hopkins announced in 2007 that it was bringing a car-sharing program to Baltimore, Brenda Armour was ready.

“I think I was the third or fourth to sign up,” says Armour, who lives in Charles Village and is assistant to the dean of student life on the Homewood campus.

A former resident of New York and Chicago, she had not only sold her car but was already a proponent of the concept. “It’s an excellent opportunity for urban life,” she says. “I recommend it all the time—to grad students in particular and to my neighbors, many of whom are grad students. It’s much easier than renting a car, and it’s not as expensive as using taxis. It makes perfect sense in a city as dense as Baltimore.”

Johns Hopkins now has 16 Zipcars available in various spots on the Homewood campus, and Armour readily admits that she has a favorite: a blue Prius named Parlett. When that car’s not available, her go-to “stepcar,” she says, is a Scion xB named Blind.

One of approximately 700 drivers now signed up for the Johns Hopkins Flexcar program, Armour says that she loves the ability to hop in a car for “mundane reasons” like shopping, going to the dentist or taking her cat to the vet, or for the flexibility it gives her for meeting friends outside the neighborhood. “It gives you the opportunity to expand your social network,” she says.

Cars are available around the clock, by the hour or the day, and rates include gas and insurance.

The university’s car-sharing program is open to all Johns Hopkins students over the age of 18, faculty and staff; and to community members. To learn about Zipcar, the largest service of its kind in the world, or to sign up, go to www.zipcar.com/jhu.