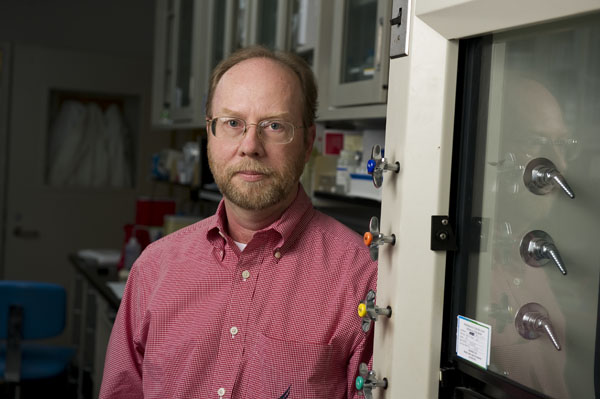 Johns Hopkins Children’s Center cardiologist Allen Everett recently won more than $460,000 in stimulus grant funding to identify the biomarkers of idiopathic pulmonary hypertension, or IPH, a progressive and highly lethal condition in children and adults marked by persistently elevated pressure in the artery that carries blood from the heart to the lungs.

Biomarkers—biological “byproducts” or “footprints” of disease—are substances that can be measured in bodily fluids or tissues to provide clues about disease presence and activity. Like antibodies, classic biomarkers that are evidence of exposure to viruses and bacteria, or proof of immunity following vaccination, biomarkers for IPH would allow physicians to better monitor disease progression and response to treatment.

“A measurable, reliable biomarker to follow the patient’s response to medication could tell us who’s benefiting and who’s not, help us predict how well the patient will do and tells us if we should tweak the dose for a better effect,” Everett said.

Currently, the most common way to track the course of IPH is an echocardiogram—an ultrasound image of the heart and the pulmonary artery—but the test is time-consuming, expensive and subject to misinterpretation. Perhaps more importantly, researchers say, there is no objective and accurate way for doctors to follow how well the patient is responding to medications.

IPH patients are treated with vasodilators that expand and relax blood vessels to improve blood flow and ease pressure in the pulmonary artery and the heart. However, up to 30 percent of patients do not respond to treatment, and nearly 70 percent of those who don’t respond die within five years of diagnosis, researchers say.

Everett has already homed in on several promising candidate proteins as IPH biomarkers. Preliminary findings show that these proteins circulate at much higher levels in the blood of children with IPH than in children without the disease. The Johns Hopkins researchers are now trying to determine if the levels of these proteins drop when children respond to treatment but remain elevated when they don’t. If they do, the next step to further validate the reliability of these biomarkers will be testing them in nearly 150 children and adults with IPH at Johns Hopkins and at the University of Colorado.

“In order to classify these proteins as bona fide biomarkers, we also want to make sure they reliably and predictably detect changes in medication response in a larger group of patients,” Everett said.

While the main goal of these new biomarkers is to monitor disease progression and response to treatment, they may also end up revealing fresh clues about the origin of IPH, investigators said. For example, whether a protein came from vascular cells rather than from an inflammatory response may tell researchers if a patient’s disease stemmed from blood vessel injury rather than from blood vessel inflammation.

As part of the American Recovery and Reinvestment Act of 2009, informally known as ARRA, the National Heart, Lung and Blood Institute is investing its $763 million of economic stimulus funds into peer-reviewed research on the prevention and treatment of heart, lung and blood diseases. Hopkins Children’s faculty and affiliated researchers have received more than $3 million in federal economic stimulus grants from the NIH, including the one to Everett.

Everett’s team’s investigations are among the more than 340 stimulus-funded research grants and supplements totaling more than $160.3 million that Johns Hopkins has garnered since Congress passed ARRA, bestowing the National Institutes of Health and the National Science Foundation with $12.4 billion in extra money to underwrite research grants by September 2010. The stimulus package—which provided $550 billion in new spending, including the above grants—is part of the federal government’s attempt to bring back a stumbling economy by distributing dollars for transportation projects, infrastructure building, the development of new energy sources and job creation, and financing research that will benefit humankind.