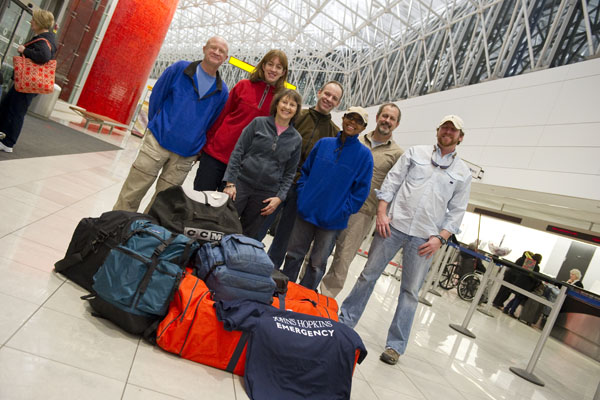 Johns Hopkins Go Team members, clockwise from left: Mike Clemmens, a pediatrician at Anne Arundel Medical Center; Alicia Hernandez, a nurse in the JHH adult Emergency Department; Gene Gincherman, an emergency physician at Suburban Hospital; Tom Kirsch, an associate professor in Emergency Medicine in the School of Medicine and CEPAR director of operations; Rocky Cagle, a nurse in the JHH ICU; Emmanuelle Clerisme, an instructor in Pulmonary Medicine in the School of Medicine; and Beth Sloand, an assistant professor in Acute and Chronic Care in the School of Nursing. Photo: Will Kirk/Homewoodphoto.jhu.edu

The Johns Hopkins Office of Critical Event Preparedness and Response has deployed its first group of Johns Hopkins physicians, nurses and other experts to Haiti to help that nation’s injured and suffering. A second group will leave on Thursday.

The medical experts serve on the Johns Hopkins Go Team, which has approximately 185 members who are trained to respond to disasters.

Seven members of the Go Team left Baltimore last Wednesday in collaboration with the International Medical Corps, a humanitarian nonprofit organization based in Santa Monica, Calif.

The second Go Team group will include approximately 15 Johns Hopkins medical experts, who may staff the 150-bed U.S. Navy Expeditionary Medical Treatment Facility being set up at the Port-au-Prince port. This facility will accept patients transferred from the USNS Comfort.

Gabe Kelen, professor and chair of the Johns Hopkins Department of Emergency Medicine and director of the Office of Critical Event Preparedness and Response, said that he and other CEPAR leaders spent many days carefully evaluating a number of requests for medical assistance in Haiti and decided to move forward with the IMC and the Navy because of their strong credibility and disaster experience.

“We didn’t want to just rush people down to Haiti and add to the chaos,” Kelen said. “We wanted to commit to missions that would be highly effective in helping Haiti’s suffering and help the nation recover in the long term.”

The Johns Hopkins mission that left Jan. 27 is being led by Tom Kirsch, an emergency physician who has served in a number of other disasters, including the 9/11 destruction of the World Trade Center towers in 2001 and Hurricane Katrina in 2005. The Johns Hopkins volunteers are stationed at University Hospital in Port-au-Prince, where they will provide health care for the injured and ill affected by the massive Jan. 12 earthquake.

Christina Catlett, an emergency physician and director of the Go Team, will lead the group that may staff the naval medical facility at the port. Catlett has served in a number of disasters, including Hurricanes Katrina, Ivan and Rita. She also is familiar with Haiti, having led three medical missions to the Central Plateau region of the island for Project Medishare for Haiti, a nonprofit dedicated to helping that country develop and improve public health services. She said that the teams deploying to Haiti will relieve doctors and other health care providers who are fatigued or who need to return home for other reasons.

“The Go Team will use their medical and disaster skills to help in the ongoing crisis, as well as serve the long-term health needs of the people of Haiti,” Catlett said.

The Go Team, which is funded by a Health Resources and Services Administration grant, was set up to provide highly trained medical support to areas hit hard by natural or man-made disasters in the United States and overseas. CEPAR provides administrative and logistical support for the team.