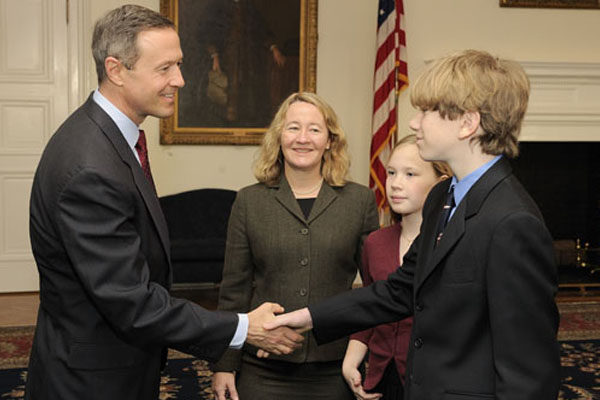 Gov. Martin O’Malley greets Carol Greider and her children, Gwendolyn and Charles, as they arrive at his office. Photo: Will Kirk/Homewoodphoto.jhu.edu

Greider, who earlier last month accepted her 2009 Nobel Prize in physiology or medicine in a ceremony in Stockholm, was honored on Thursday with twin recognition ceremonies in the Maryland House of Delegates and Senate. Both bodies gave her standing ovations and passed resolutions that praised Greider’s accomplishment and lifetime of achievements.

Greider, the Daniel Nathans Professor and director of Molecular Biology and Genetics in the Johns Hopkins Institute for Basic Biomedical Sciences, shared the Nobel with two other scientists for their discovery and work with the enzyme telomerase, which protects chromosome ends. The enzyme was later found to play a major role in cancer cell growth and diseases related to aging.

Greider, accompanied by her children, Charles and Gwendolyn, began the day with a meeting with Gov. Martin O’Malley in the governor’s reception room. O’Malley welcomed Greider, her children and a small contingent of Johns Hopkins officials, including President Ronald J. Daniels, into the governor’s office, where Greider and O’Malley had a conversation about the importance of science education.

Greider and company were then escorted to the House of Delegates, where speaker Michael E. Busch welcomed her warmly before the resolution was passed to honor her achievement. She was then whisked to the Senate chamber, where she received a similar welcome and words from Sen. Catherine Pugh and President Mike Miller.

The event concluded with a reception in the Miller Senate Office Building, where many members of both houses stopped by to congratulate Greider, who, by all accounts, “charmed Annapolis” with her humility, passion for science and smile.