Rising to the challenge: The quiet contributors

This is the first in an occasional series of articles about individuals and organizations that have made extraordinary commitments to the future of The Johns Hopkins University.

Unless you stumbled upon it, you probably wouldn’t know about the Hodson Scholars Luncheon. For decades, it’s been an annual tradition on the Homewood campus, bringing administrators, faculty and a select group of students together each December to acknowledge and celebrate a remarkable ongoing relationship that stretches back more than half a century.

At the most recent luncheon, executives of the Hodson Trust—a charitable organization that exclusively supports just four Maryland educational institutions—announced awards totaling more than $1.74 million to The Johns Hopkins University for scholarships, research in oncology and nephrology, and publication of The Complete Prose of T.S. Eliot. The contribution brings total Hodson Trust giving to the university to nearly $72 million since the first gift was made in 1958, leading university President Ronald J. Daniels to observe that “there are few other philanthropic organizations whose legacy at Johns Hopkins has been as profound and wide-ranging as that of the Hodson Trust.”

Through 2009 the Hodson Trust has awarded more than $217 million to Johns Hopkins, Hood College, St. John’s College and Washington College, the four Maryland schools it supports in honor of its namesake, Col. Clarence Hodson, a Maryland resident who pioneered the concept of making small loans available to ordinary working-class Americans. In 1914 he established the Beneficial Loan Society, which eventually became one of the nation’s most successful lending institutions. Its trademarked jingle—At Beneficial, TOOT TOOT, You’re Good for More—remains instantly recognizable to generations of Americans. The company became part of Household International, now HSBC, in 1998. The Hodson Trust was settled in 1920 with shares of Beneficial by members of the colonel’s family with the express intention that it would be devoted to supporting education. 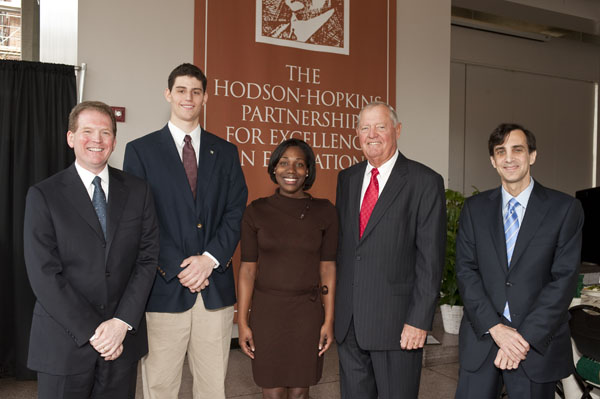 Over the course of more than half a century, the bulk of Hodson Trust giving to Johns Hopkins has been in the form of undergraduate scholarship aid, which currently falls into two categories. Hodson Scholarships are merit-based awards that cover roughly two-thirds of the cost of tuition each year for four years, and are offered to prospective students who both demonstrate exceptional academic achievement and make outstanding contributions beyond the classroom. Hodson-Gilliam Success Scholarships are need-based awards aimed specifically at underrepresented minorities and are intended to relieve a prospective student of the loan portion of his or her total financial aid package. This year, 82 students hold Hodson Scholarships, and 26 others are Hodson-Gilliam Success Scholars. According to Hodson Trust Chairman Gerald Holm, the focus on students of extraordinary promise is intended to bring a better future for all. “We are confident that we are investing in students who will make the most of their educations and go on to change the world for the better,” he says.

The annual Hodson luncheon is a celebration of those exceptional students. All Hodson Scholars and Hodson-Gilliam Success Scholars are invited, along with the university president and provost, Hodson Trust board members and guests, and some faculty. Each year, one Hodson scholar and one Success scholar are asked to speak about what scholarship support has meant for their time at Johns Hopkins.

Hodson Scholar Andrew Farber-Miller, a senior who spoke at the December luncheon, says that he tried to convey the unparalleled opportunity the Hodson scholarship afforded him. “Coming to a prestigious university like Hopkins is a tremendous opportunity and challenge,” he says. “The Hodson Scholarship made it possible for me to take advantage of all that Hopkins has to offer inside and outside the classroom. The financial benefits were significant for me. Not having to hold a job during the academic year gave me the freedom to concentrate on my studies and also gave me the time to be able to make a contribution to the Hopkins community in other ways. The prestige associated with the scholarship provided an extra incentive for me to strive for excellence in everything I have done here.” After graduation in May, Farber-Miller plans to enroll in post-baccalaureate training and then go to medical school. At Johns Hopkins, he has participated in extracurricular activities related to his public health major, fraternity life and basketball, and he is an active volunteer with his hometown fire department.

Bill Conley, dean of enrollment and academic services, says of the scholarships, “The Hodson Trust enables us to look at the cream of admitted students and encourage their enrollment. Our pool of candidates is as strong as any pool at any school. These scholarships give us an opportunity to shape the class, and are a tremendous inducement for the students to choose Hopkins,” he says. “The fact of the matter is that we have a very low scholarship endowment relative to our peers, and what scholarship dollars we have are a critical tool in the recruitment and retention of students.”

The trust’s generosity to Johns Hopkins has taken many other forms over the years, most notably with the construction in 2002 of the Homewood campus’s Hodson Hall, a $15 million, 44,000-square-foot, state-of-the-art academic building that also houses the university’s board of trustees meeting room. In addition, the Provost’s Undergraduate Research Awards—which have become an integral part of the undergraduate learning experience on the Homewood campus—were sponsored and eventually completely funded by the Hodson Trust.

In 2006, the trust broke new ground by agreeing to support the research and publication of an eight-volume series of the complete prose of T.S. Eliot. “This project will transform people’s notions of Eliot,” predicts Kathleen Keane, director of the Johns Hopkins University Press. “The Hodson Trust made a very innovative and far-sighted grant that will enable us not only to publish the papers but to fund the scholarly work needed to put it together. This is a truly transformative project that simply wouldn’t have happened without their support.” Ronald Schuchard, a renowned Eliot scholar and a professor at Emory University, is leading the project, which will also allow the Press to develop the electronic edition of The Complete Prose of T.S. Eliot.

“Overall, the Hodson Trust has been just a huge benefactor to Johns Hopkins,” says senior admissions officer John Birney, who relies on the Hodson Scholarships to help shape incoming undergraduate classes. “It’s not only the scholarships but also their support of things like the Provost’s Undergraduate Research Awards, the construction of one of our most advanced classroom buildings and so much else. They do a lot of good for Johns Hopkins that often goes unrecognized. But this is how much Hodson means to us: They are a great addition to the Hopkins family. Plain and simple, we couldn’t enroll these exceptional students without their help.  These students wouldn’t be here without the Hodson Trust.”

Stephen Baylin, the Virginia & D.K. Ludwig Professor in Cancer Research in the School of Medicine’s Department of Oncology, reflects on his lab’s support from the Hodson Trust:

“For the past several years, the Hodson Trust Foundation has provided invaluable support to our group to establish a research center—the Hodson Center for Cancer Research Scholars—for investigating the role of epigenetic abnormalities in the initiation and progression of lung cancer.

“Specifically, [the trust’s] intent was to fund young investigators in their training years, with mentorship from both senior and junior faculty, for studies aimed at altering these abnormalities as a strategy to prevent the occurrence of these diseases and/or to treat their earliest stages. The intent is, also, to use innovative approaches, utilizing the latest technologies, to accomplish these goals.

“The virtual center has helped bring together research in the Sidney Kimmel Comprehensive Cancer Center that involves trainees and investigators from multiple departments at the medical school and on the Homewood campus. This support has helped underpin some of the most exciting progress we have made in both basic and clinical research, which hold great promise for accomplishing both of the above goals sought by the trust.

“Specifically, accomplishments since the center was established have contributed greatly to implementing strategies to detect epigenetic changes in tumor DNA and lymph nodes that predict the course of patients after surgical treatment for what appear to be the earliest stage of lung cancer. Despite such stage designation by current pathology criteria, some 30 percent or more of patients will suffer disease recurrence and fail to survive over a five-year period.

“Studies by the Hodson-funded investigators, working principally with Drs. Malcolm Brock and James Herman in the departments of Surgery and Oncology, respectively, helped to discover a panel of genes that undergo abnormal epigenetic regulation in lung cancer. Simultaneous detection of cells with these specific abnormalities in tumor and in lymph nodes in the chest at the time of surgery predicts, with very high probability, which patients are likely to recur. This suggests a molecular restaging strategy to better chart the course of early-stage disease. A graduate student, Vasudev Bailey, working with Dr. Tza-Huei “Jeff” Wang in the Mechanical Engineering Department and Whitaker Biomedical Engineering Institute, has developed a nano assay to refine the above gene detection for ease and sensitivity, and this promises to enhance use of sputum and blood for additional power of the staging strategies and of early lung cancer detection.

“These successes prompted Oncology Department faculty members Drs. Rosalyn Juergens and Charles Rudin, working with Dr. Brock, to institute the first trials of ‘epigenetic’ therapy to treat patients with advanced lung cancer in which robust, durable responses have been achieved in several patients who have failed previous chemotherapy regimens. This year, pursuant to these successes, the entire team is working together surrounding the first trial of such therapy to try and reduce the recurrence of lung cancer in patients after surgery for early-stage disease, and to determine if the gene marker strategy can predict those who will benefit from this approach.”

Filed under Around Hopkins, Rising to the Challenge