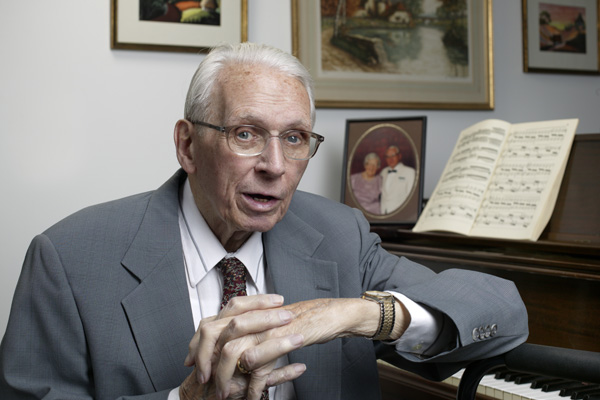 For many medical students, residents and fellows spanning five decades, C. Lockard ‘Lock’ Conley was the most important teacher and mentor they ever had. Photo: Keith Weller

C. Lockard Conley, a pioneering Johns Hopkins hematologist and acclaimed teacher who conducted landmark inquiries into blood coagulation, blood platelets, hemorrhagic diseases, hemoglobins and sickle cell anemia while simultaneously inspiring generations of students and young researchers, died of Parkinson’s disease on Jan. 30 at his home in Catonsville, Md. He was 94.

Conley, who also made crucial contributions to developing a therapy for vitamin B-12 deficiency, was as famed for his soft-spoken manner and modesty as for his brilliance in the laboratory, the classroom and at his patients’ bedsides. He joined the Johns Hopkins faculty in 1946 and was appointed head of its newly formed Division of Hematology in 1947. In 1956, he became the first physician at Johns Hopkins who was not head of a School of Medicine department to be made a full professor. He was named a University Distinguished Professor of Medicine in 1976.

For many medical students, residents and fellows spanning five decades, Conley was the most important teacher and mentor they ever had. They said their achievements could be traced directly to Conley’s impact on their lives.

In a 2006 Hopkins Medicine profile of Conley, who was known to his friends as Lock, former School of Medicine Dean Richard S. Ross, said, “He represents the best of Hopkins.”

Sir David Weatherall, former Regius Professor of Medicine at Oxford, founder of Oxford’s Weatherall Institute for Molecular Medicine and now chancellor of Keele University in Staffordshire, was just plain David, a freshly minted physician from the University of Liverpool, when Conley supervised his 1963–65 fellowship at Johns Hopkins. In the foreword to a 2002 book co-edited by three other former Conley fellows and dedicated to Conley, Weatherall wrote: “Of all the remarkable physicians with whom I have had the privilege of associating over the years, I can think of no one who had more influence on the way I came to think about patient care and medical research.”

In a 2006 tribute, Weatherall said, “Lock remains for me one of the very best clinicians with whom I have ever worked. [He] above all instilled into his students the highest level of integrity both in their clinical and research activities. He is, by any standards, a clinician’s clinician and a medical scientist’s medical scientist.”

Julius Krevans, former chancellor of the University of California, San Francisco and a Conley fellow from 1950 to 1951, also acknowledged the impact Conley had on his career. “It’s fair to say nobody influenced me more as an individual and professional in academic medicine than Dr. Conley.”

Rheumatologist David Hellmann, a 1977 graduate of the Johns Hopkins School of Medicine who now is its vice dean on the Johns Hopkins Bayview Medical Center campus and head of the Department of Medicine there, was a medical student when he was first awed by Conley’s vast knowledge in all medical fields, not just his specialty. “I have a framed picture of Dr. Conley in my office to remind me every day of what an impact a great doctor and teacher can have on the lives of patients and students,” Hellmann said.

“When I was a medical student,” he continued, “one of the senior residents I most admired told me, ‘Dr. Conley is the smartest doctor at Hopkins.’ That sentiment was shared by many residents who would use their ‘elective time’ to work with Dr. Conley in the hematology clinic.

“Time and again,” Hellmann said, “I saw Dr. Conley rapidly make a correct diagnosis in a patient whose medical problems had stumped many other experts.”

Once, Hellmann recalled, a man “who had been seen in multiple hospitals by multiple doctors” came to him with painful, blue fingers. The previous diagnosis: vasculitis, an inflammation of the blood vessels; the ineffective remedy: massive doses of morphine. Hellmann said he consulted Conley, who examined the patient’s peripheral blood smear and swiftly diagnosed a rare condition: polycythemia, a blood disorder in which the bone marrow makes too many red blood cells. The effective remedy: a daily aspirin.

A prodigious researcher, Conley wrote more than 120 articles and book chapters and was on the editorial boards of many medical journals. One of his most influential articles was a 1953 paper in Technical Advances in Clinical Medicine in which he and a young research fellow, Ernest W. Smith, described how they had used inexpensive homemade equipment to separate the components of hemoglobin on filter paper by using an electrical current charging method known as electrophoresis.

Four years earlier, Conley recalled in a 2006 interview, future Nobel laureate Linus Pauling had used “a great big piece of apparatus” to accomplish the same hemoglobin analysis, but “in all the world only five or six patients had had their hemoglobin analyzed because the machinery that it took to do it was not available. Ernie Smith worked out this little technique on filter paper, and in a day he’d done hundreds of these analyses,” Conley remembered. “People came from all over to our laboratory to see how to do this.”

As a teacher, Conley “had this amazing ability to give a brief sermonette on almost anything—and make it both clear and memorable to the listener,” recalled Richard Johns in the 2006 Hopkins Medicine article. Johns is a 1948 graduate of the Johns Hopkins medical school who became the first head of its Department of Biomedical Engineering and now is University Distinguished Service Professor of Biomedical Engineering and Medicine.

Of the 70 fellows Conley supervised during 33 years as head of the Hematology Division, 10 were elected to the American Society for Clinical Investigation, and a dozen became heads of hematology divisions or chairmen of departments of medicine.

Upon his retirement from Johns Hopkins in 1980, Conley was appointed distinguished senior clinician to the U.S. Public Health Service Hospital in Baltimore, located at what was then the Wyman Park Hospital, and established a successful program for teaching medical students there before retiring again in 1987.

Born in Baltimore, Conley received his bachelor’s degree from Johns Hopkins in 1935 and his medical degree from Columbia University in 1940. During World War II, he was stationed in Alabama at the Air Corps’ Maxwell Field general hospital, where he treated airmen and instructed them on how to use oxygen during flight. “We would take them up in simulated high altitudes and let them faint to convince them that they really needed oxygen,” he later recalled.

Conley once said that his fellows at Johns Hopkins became a surrogate family—“a very delightful one”—to him and his wife of 61 years, Edith, who died in 2004.

Conley’s two daughters, Anne Weaver, a pediatrician in Amherst, Mass., and Jean Alexander, a horticulturist in Silver Spring, Md., survive him, as do two grandchildren and four great-grandchildren.

A memorial service will be held at 11 a.m. on Saturday, March 20, at Our Lady of the Angels chapel at the Charlestown Retirement Community in Catonsville.