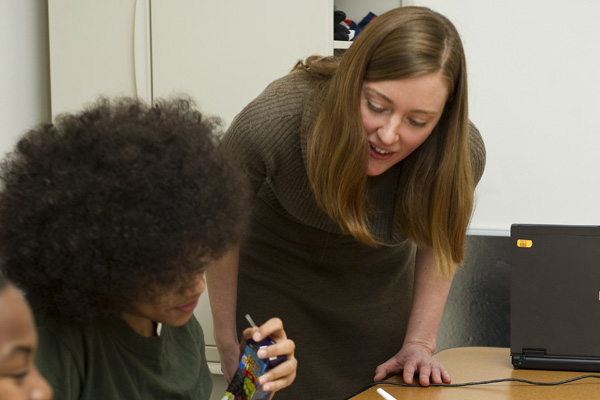 Heather Thompson, a part-time MPH student in the School of Public Health, works on a nutrition program with middle-schoolers enrolled in SquashWise. Photo: Will Kirk/Homewoodphoto.jhu.edu

Heather Thompson opened her talk on the food pyramid with a healthy heaping of knowledge on grains. The part-time MPH student at the School of Public Health then veered off into the meat and beans territory, with stops at all the other groups, from vegetables to the “know your limits” fats and sugars.

Thompson’s audience was a small group of 6th- and 7th-grade students from the Baltimore Civitas School who are enrolled in Baltimore SquashWise, a fitness and education enrichment program that serves public middle school students in the city. The 13 students eagerly answered Thompson’s questions about nutrition and had a few questions, and often amusing declarations, of their own.

“Is a tomato a fruit or a vegetable?” one student asked.

“What food group would a Pop Tart be in?” asked another.

“I drank two raw eggs once, but they kind of came back up on me.” After a round of laughs from that line, Thompson smiled and composed herself. “Well, don’t want to make a habit of that,” she said.

Thompson and two colleagues at the Johns Hopkins Bloomberg School of Public Health are volunteering their time at SquashWise for the next seven weeks as part of the Connection Community Consultants Group, a now five-year-old program hosted by SOURCE, Johns Hopkins’ Student Outreach Resource Center that provides academic, professional and personal development opportunities for members of the schools of Medicine, Nursing and Public Health through community outreach and service-learning partnerships with community-based organizations.

The Connection, as it’s commonly called, won Program of the Year in 2008 from the American College Personnel Association, and last year won a Student Leadership Award from the Jenzabar Foundation, which recognizes and supports the humanitarian efforts of student leaders.

Aitalohi Amaize, a program assistant with SOURCE and an MPH student at the School of Public Health, said that the Connection program is what SOURCE is all about.

“We wanted this program to make a significant contribution to the community,” Amaize said. “In a relatively small amount of time, students can use their skills and contribute to very worthwhile organizations.”

To become a Connection “consultant,” students submit a resume and a profile that identifies his or her skill set. SOURCE staff then match up the students with projects requested by a network of more than 100 community organizations with which it partners.

The Connection program annually hosts up to a dozen projects that last no longer than eight weeks. The students work in small teams in the self-directed endeavors. More than 30 projects have been completed to date.

In the 2008–2009 academic year, Johns Hopkins students participated in seven projects, including one to help recognize Jewel House—a nonprofit that offers programs and services to teen parents—as a health clinic with the Maryland Department of Health and Mental Hygiene. The five-member Connection team gathered information, spoke with DHMH representatives and learned about the process for becoming a medical assistance provider.

In another project, a Connection team researched grant opportunities and donors to provide support for the Community Hospices of Maryland, particularly initiatives aimed at inner city and pediatric patients. Students also volunteered at Moveable Feast, the Center for Graceful Living Wellness Center, Project HEALTH and Adelanta Familia, a bilingual program of St. Vincent de Paul dedicated to the eradication of domestic violence in the Latino community.

During the current academic year, the Connection has worked on six projects, including SquashWise, and eight new projects have just been announced for the spring term.

Students from Civitas and Booker T. Washington Middle School in West Baltimore meet three days a week for the program, typically at the SquashWise headquarters in the Meadow Mill Athletic Club, a fitness center and the largest commercial squash facility in the United States. The participants also play squash and receive tutoring at Johns Hopkins’ Ralph S. O’Connor Recreation Center on the Homewood campus.

Thompson’s team, which began planning in October, will be involved strictly with the enrichment curriculum from now until March. The lessons will involve basic nutrition tips, how to keep a food diary, a cooking demonstration, a dental health unit and discussions about nutritional diseases, such as diabetes and obesity. For the final project, the Civitas and Booker T. Washington students will present a nutrition fair at their schools that combines all that they have learned.

Thompson, the project leader, said that the program fills a glaring need.

“These kids aren’t getting taught about nutrition enough in school, and the reality is that most of them are not getting enough structured, home-cooked meals, as parents might be busy, stressed out or otherwise not able,” she said.

Abby Markoe, executive director of SquashWise and a graduate student in the history of medicine at the Johns Hopkins School of Medicine, said that the enrichment units are meant to spice up the program’s learning component.

“It would get boring for the students to just do their homework during our tutoring time,” said Markoe, an avid squash enthusiast. “To have outsiders like the students from the School of Public Health come in is nice. That is why we became a partner with SOURCE. The student volunteers help make learning fun. We’ll also do a food tasting and visit a restaurant later this winter. We’re still teaching, but it’s different from what they’re doing on a daily basis.”

Thompson said that the Connection program allows her, too, to step outside the classroom.

“Volunteer experiences like this are a way to really connect with what this MPH degree is supposed to be about,” she said of the program she’s in. “I’m very interested in nutrition and the food production process. With this project I get to apply all of the things I learn about in class in a real-world setting and then get to see results. It’s going to be really exciting to see the fruition of these lessons.”

During the discussion on the food pyramid, Thompson highlighted the need to add exercise and asked the students to identify some ways to burn calories.

To learn more about the Connection and to get involved, go to www.jhsph.edu/source/audiences/ Students/Connection.