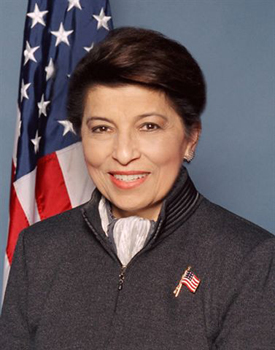 Former deputy administrator of the U.S. Small Business Administration Jovita Carranza will speak on “The Innovator’s Challenge in an Age of Accountability” at 6:30 p.m. on Thursday, Feb. 11, at Johns Hopkins’ Bernstein-Offit Building in Washington, D.C. The lecture is jointly sponsored by the Johns Hopkins Carey Business School and the Society of Minority Business Leaders.

Carranza served as the deputy administrator for the SBA from December 2006 to January 2009. Prior to her appointment, she was vice president for air operations for UPS, the world’s largest package delivery company, at its Louisville, Ky., facility, making her the highest-ranking Latina in the company’s history. Carranza started her career at UPS in 1976 as a part-time night-shift clerk in Los Angeles, advancing through the company’s ranks.

Named 2004 Woman of the Year for outstanding accomplishments throughout her career by Hispanic Business magazine, Carranza was also honored in 2008 for her contributions to the Hispanic community and for her public service by the Latino Coalition Leadership in Washington, D.C. She has also been recognized as a Woman of Distinction by the American Association of University Women and Student Affairs Administration in Higher Education.

To RSVP for the lecture, e-mail SMBL@jhu.edu.