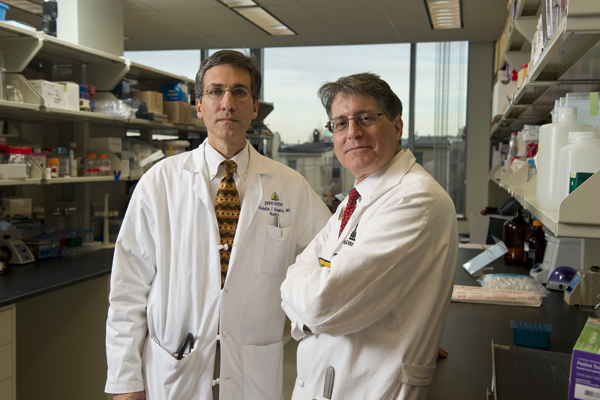 Lead researcher Jeffrey Rothstein, right, and Nicholas Maragakis will provide the cells generated in their program to other researchers nationwide. Photo: Will Kirk/Homewoodphoto.jhu.edu

A two-year $3.7 million stimulus grant from the National Institutes of Health will allow Johns Hopkins neurologist and lead researcher Jeffrey Rothstein to expand on his long-standing research into the nerve- and muscle-wasting disease amyotrophic lateral sclerosis, or ALS.

Using stem cells developed in a laboratory from skin cell samples taken from 20 ALS patients and five control subjects, Rothstein and his colleagues will study the biology and chemistry involved in the development and progression of the disease and will test drugs to intervene in the process. When the two-year program is completed, the cells generated will be available nationwide to other researchers.

“We believe that the ability to work with the two types of cells most relevant for ALS, developed directly from ALS patients, will give us a tremendous boost toward understanding more about this disease,” said Rothstein, a professor of neurology and neuroscience and director of the Robert Packard Center for ALS Research at Johns Hopkins. “Importantly, this will serve as a scientifically rich national resource for human ALS cell lines.”

ALS, also known as Lou Gehrig’s disease, is characterized by a gradual loss of muscle strength and coordination. The disease is fatal, with only about 20 percent of patients living more than five years beyond diagnosis.

The funding for the Johns Hopkins work comes from an NIH Grand Opportunities grant, part of the American Recovery and Reinvestment Act of 2009. According to the NIH, the grants in this program “provide investigators and institutions with the opportunity to engage in new avenues of research with a high likelihood of significant impact on growth and investment in biomedical or behavioral research and development, public health and health care delivery.”

“This program will provide the first national tissue resource of real human ALS cells that could be used in projects ranging from understanding the disease to the discovery of new effective therapies,” Rothstein said. “By having a centralized, highly characterized tissue resource, we can help catalyze research on this disease nationally, and advance therapeutics.”

The award will be shared with three other laboratories, one at Harvard University and two at Columbia University. The project will create at least three new jobs in the labs at Johns Hopkins, as well as multiple jobs at the collaborating sites, Rothstein said.

The Johns Hopkins team will collaborate with San Francisco–based biopharmaceutical company iPierian, which specializes in working with the novel stem cells to be used in this project. The stem cells, known as induced pluripotent stem, or iPS cells, can develop into cells that populate many organs but are derived from non-stem cells. The scientists plan to grow iPS cells from ALS patients’ skin, then steer them to develop into motor neurons and astrocytes, the two types of nerve cells that are affected in ALS.

Previous studies of ALS have been hindered by the fact that researchers can’t use patients’ actual neurons in studies. By generating iPS cells, Rothstein and his colleagues hope to open up new avenues for research and discovery.

Rothstein will be working with Johns Hopkins School of Medicine colleagues Nicholas Maragakis, an associate professor of neurology, and Dwight Bergles, an associate professor of neuroscience, who will be analyzing the iPS cells for functional properties so the team will know when they have succeeded in making an astrocyte before providing the cells as a national resource.

Rothstein’s investigation is among the more than 340 stimulus-funded research grants and supplements totaling more than $160.3 million that Johns Hopkins has garnered since Congress passed the American Recovery and Reinvestment Act of 2009 (informally known by the acronym ARRA), bestowing the National Institutes of Health and the National Science Foundation with $12.4 billion in extra money to underwrite research grants by September 2010. The stimulus package—which provided $550 billion in new spending, including the above grants—is part of the federal government’s attempt to bring back a stumbling economy by distributing dollars for transportation projects, infrastructure building, the development of new energy sources and job creation, and financing research that will benefit humankind.

To date, 112 jobs have been created at Johns Hopkins through ARRA funding.