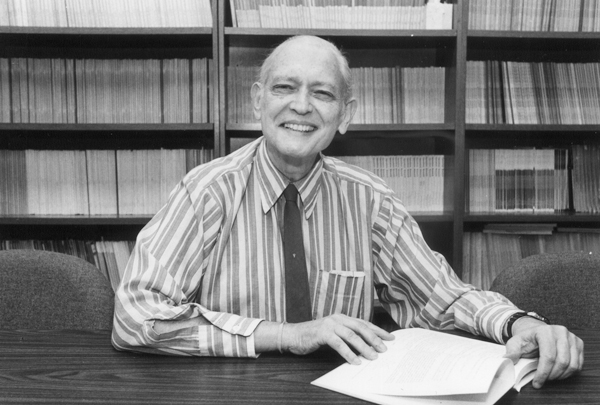 Alan J. Goldman, a widely respected expert in operations research who spent more than three decades on the faculty of the Whiting School’s Department of Applied Mathematics and Statistics, died Feb. 13 at his home in Baltimore.

A memorial gathering in his honor will be held from 11 a.m. to 3 p.m. on Sunday, March 14. Friends, colleagues and students will share memories in 210 Hodson Hall on the Homewood campus. Refreshments will be served in the lobby area outside the room.

“All who came into contact with him were exposed to a man with tremendous intellectual energy and enthusiasm for ideas,” said Daniel Q. Naiman, professor and chair of Applied Mathematics and Statistics. “In any context he could be counted on to ask the most penetrating questions. Still, we will remember him for his wonderfully warm, gentle and compassionate manner. He closed most conversations and e-mails with ‘Peace,’ and his behavior was consistent with this expression.”

The late professor’s son, Peter Goldman of Falls Church, Va., said his father was recuperating from a heart attack suffered on Thanksgiving Day when he died peacefully in his sleep. He was 77.

From 1956 through 1979, Alan Goldman worked for the National Bureau of Standards (now the National Institute of Standards and Technology), advancing to the post of chief of operations research. But according to his son, Goldman considered his years of service at Johns Hopkins, which he joined as a professor in 1979, to be the most gratifying of his career. “My father was very passionate about education,” Peter Goldman said. “He loved teaching at Johns Hopkins. It was the love of his life.”

In 1999, when he transitioned from full-time to professor emeritus status, his colleagues and students in what was then called the Department of Mathematical Sciences paid tribute to him in a celebration called the “Goldmanfest.”

At the event, Goldman was lauded for having published more than 100 papers, supervised nearly 200 more and overseen at least a dozen doctoral dissertations. In more recent years, he continued to teach on a limited basis.

Goldman’s primary academic focus was operations research: the use of mathematics to improve decisions on the design and operation of complex systems. According to colleagues, his favorite application areas included facility siting, transportation systems and mathematical game theory. In the years since the Goldmanfest event, prominent operations research experts from around the country have been invited to Johns Hopkins to deliver an annual Goldman Lecture, funded in his honor by the Department of Applied Mathematics and Statistics.

During his career, Goldman received several important honors, most notably a U.S. Department of Commerce Gold Medal in 1976 and election in 1989 to the highly prestigious National Academy of Engineering, two professional achievements in which he took great pride, his son said.

Goldman grew up in Brooklyn, N.Y. (within walking distance of the Coney Island amusement district) and received his bachelor’s degree from Brooklyn College in mathematics and physics in 1952. He earned his doctorate in mathematics from Princeton University in 1956. He was married for almost 50 years to Cynthia Goldman, who died in 2004.