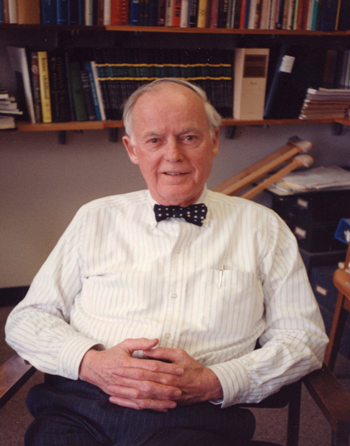 Barton Childs, professor emeritus of pediatrics at the Johns Hopkins University School of Medicine and a legendary geneticist and teacher who influenced the practice of generations of physicians and shaped their understanding of inherited disease, died Feb. 18 at The Johns Hopkins Hospital after a short illness. He was 93.

“We have lost a giant of his or any generation of medicine,” said Edward D. Miller, dean of the medical faculty and CEO of Johns Hopkins Medicine. “His medical home was at Johns Hopkins, but his influence was worldwide.”

“We have lost a dear friend and a visionary in genetics and pediatrics, a deep and rigorous thinker committed to the integration of genetics and medicine, the individuality of us all and to education at all levels,” said David Valle, professor and director of the McKusick-Nathans Institute of Genetic Medicine at Johns Hopkins.

Childs spent nearly 70 years at Johns Hopkins, coming to the Baltimore institutions as a first-year medical student in 1938. He remained active until a few weeks before his death.

The first director of Genetics in the Department of Pediatrics at Johns Hopkins, Childs made critical contributions to the understanding of the genetic underpinnings of many diseases, including adrenal hyperplasia, Addison’s disease and hypoparathyroidism. He formulated the now-classic study showing the first definitive proof that one of the two X-chromosomes in human females is inactivated during early development, a fundamental biological mechanism. He encouraged many Hopkins colleagues to consider the human diseases they studied in the context of genetics, including prostate cancer, inflammatory bowel disease and dyslexia. And he collaborated with his wife, Ann Pulver, also of Hopkins, in seminal studies of the genetic basis of schizophrenia and other neuropsychiatric diseases.

Colleagues perhaps consider Childs’ greatest contribution to be his quest to integrate genetics into all of medicine. Known as a Renaissance man of medicine and an intellectual jack-of-all-trades, Childs published on topics as diverse as cerebral palsy, human development and evolution. And, say those who worked with him, he had an insatiable curiosity about human nature that drove him to study ethical and philosophical questions beyond the field of medicine.

In the 1970s, Childs was among the first to analyze the impact of genetic testing and counseling on patients and families.

“He was 50 years ahead of his time,” said colleague and former student Ada Hamosh, a pediatric geneticist at Hopkins Children’s. “Barton Childs was an incomparable pediatrician, a prescient geneticist and a wonderful human being. I will always cherish my memories of his pointed questions, high standards and unique style manifested in his trademark red socks.”

Childs thought deeply about education throughout his career, colleagues said. He proposed new ways of thinking about the origins and consequences of disease, including a new model, the “diseasome,” which defines human disease not as a stand-alone or isolated set of disorders but as a complex and intricate interplay of multiple actions among and between genes and the environment. In his 1999 book Genetic Medicine: A Logic of Disease, Childs proposed a new holistic way of thinking about health and disease, one that takes into consideration each patient’s unique genetic makeup as well as the environmental and cultural factors that affect the individual.

His book became the basis for the new curriculum at the Johns Hopkins medical school called Genes to Society, which integrates many of his concepts into physician training and was launched a year ago.

“Barton Childs was the rare individual whose brilliance transcended his specialty and reached into philosophy, history of science and education,” said David Nichols, vice dean for education and professor of anesthesiology and critical care medicine in the Johns Hopkins School of Medicine. “This allowed him to articulate a vision of a new type of medicine and medical education focused on having the physician understand what makes each of us unique as individuals and patients. All of us who admired him so much are grateful that he lived long enough to see his vision begin to take shape as the intellectual foundation for the Genes to Society curriculum of the Johns Hopkins School of Medicine,” Nichols added.

Faculty members recall how Childs taught his students to ponder what he saw as the defining question in medicine: Why does a given person get a particular disease at a particular time? Childs realized that genes are only one piece of a puzzle that also includes in-utero exposures and early childhood development as well as the social and environmental experiences of the individual.

“Dr. Childs believed in nuance and variability from patient to patient and recognized long ago that our emerging understanding of genetics would lead to a new emphasis in medicine where we would be able to treat the individual and not the disease,” said George Dover, director of the Johns Hopkins Children’s Center.

Childs once wrote that “disease is as much a consequence of variation in our social and cultural organization as biological, and management is best directed to whichever component is most amenable.” This insight shaped not only the modern understanding of medical genetics and human disease but also laid the groundwork for our present-day quest for individualized medicine.

“Barton Childs was one of those people who is constantly seeing things far ahead and just waiting for the rest of us to catch up,” said Charles Wiener, professor of medicine and director of the Residency Training Program at Johns Hopkins. “He was a relentless advocate for the concept of individualized medicine before it became popularized, and even before we had the tools to understand the scientific basis of individuality.”

To many in the younger generations at Johns Hopkins, Childs appeared to be a doctor from a time gone by, sporting an old-fashioned leather bag, a film noir trench coat and a faintly condescending attitude toward modernity.

Following his retirement in 1981, Childs continued to write, publish and work with fellow researchers. He continued to attend grand rounds and pediatric case conferences, during which he challenged medical residents with questions—sometimes peppered with subtle irony—designed as much to educate as to interrogate.

Childs was adopted, and the absence of family history amused the geneticist in him, he told colleagues.

Childs received a bachelor’s degree from Williams College. His first encounter with genetics, during an undergraduate course in biology, was boring and disappointing, Childs recalled in a 2001 interview for the Oral History of Human Genetics Collection at the University of California, Los Angeles.

Childs’ lasting interest in genetics was sparked by many children with congenital anomalies whom he encountered at the Harriet Lane Home, the predecessor of today’s Hopkins Children’s. After spending one summer as a substitute intern in pediatrics, Childs decided that he liked the specialty, and a job offer shortly after from then Pediatrics Chief Edward Parks solidified his decision.

He left Johns Hopkins in 1943 for a three-year stint in the Army, followed by a yearlong research fellowship at Boston Children’s in 1948 and what proved to be a seminal year of postdoctoral training at University College London, in 1952. In London, Childs was exposed to the great geneticists of the early 1900s, including J.B.S. Haldane, Lionel Penrose and Harry Harris.

The numerous honors Childs received include the John Howland Award, the highest honor in the United States for achievement in pediatrics; the William Allan Award, the highest honor of the American Society of Human Genetics; and the Research Career Award of the National Institutes of Health. From 1972 to 1975, Childs was chairman of the National Academy of Sciences’ national research committee on inborn errors of metabolism, which laid the groundwork for the current policies on genetic-disease screening in newborns.

In addition to his wife, Childs is survived by two daughters, Anne and Lucy, from his first marriage to Eloise, who died in a car accident in 1980. Arrangements are pending for a memorial service at Johns Hopkins.

Contributions can be made to the Barton Childs Lectureship Fund of the McKusick-Nathans Institute of Genetic Medicine by calling 410-955-4260 or going online to www.hopkinsmedicine.org/geneticmedicine.