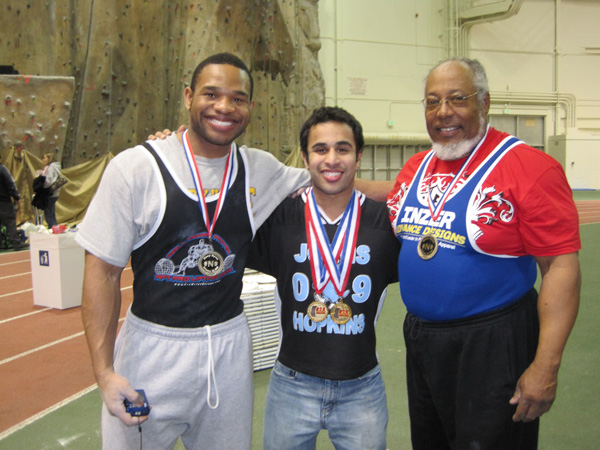 People at Johns Hopkins often display power of the mind. Last month, a trio of JHU affiliates showed off some major brawn and came home champions.

Rajiv Mallipudi, a master’s degree candidate at the School of Public Health; Roosevelt Offoha, a first-year student at the School of Medicine; and Floyd Hayes, a senior lecturer in the Krieger School’s Department of Political Science, each took first place in their respective divisions at the USAPL Maryland State Powerlifting and Bench Press Championships. The event, originally scheduled for Dec. 19 but canceled due to snow, was held on Feb. 20 in Annapolis.

Mallipudi, a recent biomedical engineering graduate of the School of Engineering who is studying reproductive and cancerbiology at the Bloomberg School, set eight Maryland state records. Offoha set four. Hayes, coordinator of programs and undergraduate studies in the Center for Africana Studies (who also happens to be the husband of the university’s vice president for human resources, Charlene Hayes), also set four.

The three did not know each other well before the event, Mallipudi said, but bonded through their Johns Hopkins connection and shared passion for powerlifting. Mallipudi and Offoha are planning to compete in the USAPL Raw Nationals in Aurora, Col., in July.

Fans of Johns Hopkins sports may unknowingly be familiar with Mallipudi’s physical prowess: As an undergrad, he was the man inside the Blue Jays suit.

Filed under Around Hopkins, School of Medicine