Beloved professor served Hopkins community for more than half a century 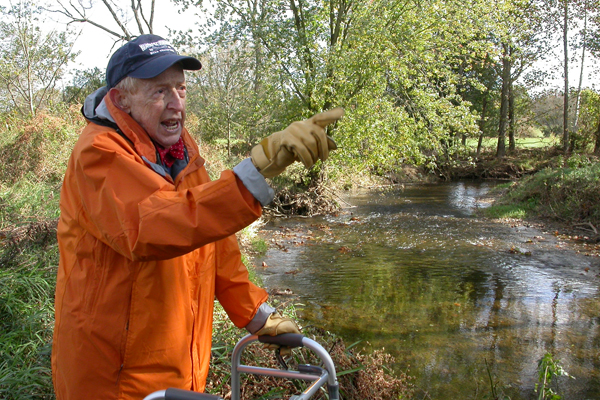 In his element: Reds Wolman on a field trip to the Stony Run in Baltimore in 2009. Photo: Royce Faddis

M. Gordon “Reds” Wolman, an internationally respected expert in river science, water resources management and environmental education, and an important and beloved member of The Johns Hopkins University faculty for more than half a century, died at his home in Baltimore on Feb 24. He was 85.

Family members said that the funeral service would be private. At press time, university officials were making plans for a campus memorial service in Wolman’s honor.

Johns Hopkins colleagues and students remember Wolman for his wit, charm, modesty and renowned teaching skills-and for his signature bow ties and the red hair that gave him his nickname. He contributed to the academic growth of the university through service as a department chair and interim provost and through strong advocacy of interdisciplinary studies.

In a 2009 <Johns Hopkins Engineering> magazine feature on Wolman, Erica Schoenberger, a professor in the Department of Geography and Environmental Engineering, which Wolman helped establish, said, “I don’t think it’s possible to imagine Hopkins without Reds. He’s worked in every corner of the university, from Engineering to Public Health to Central Administration. Everyone knows him. He knows everybody. If you did a poll to determine the person who most represents the Hopkins ideal, everybody would say Reds. It would be a landslide.”

Edward Bouwer, chair of the Department of Geography and Environmental Engineering, said, “There are few parts of the university that have not experienced his blend of wisdom, humor and warmth. Reds was not only one of the university’s most renowned intellectual leaders but a favorite and cherished member of the community. His cheerful service, combined with his good-natured wisdom, has influenced decisions and decision-makers around the world.”

Grace Brush, also a professor in the department, added, “I will forever miss conversations with Reds, just dropping by his office with some question or thought-and leaving with an encyclopedia of ideas.”

Word of Wolman’s death was delivered to the Johns Hopkins community on Feb. 25 in an e-mail from university President Ronald J. Daniels and Nicholas P. Jones, the Benjamin T. Rome Dean of the Whiting School of Engineering. “One of the most distinguished and beloved men ever to grace this university has died,” they said.

The message said that Wolman had been a faculty member since 1958 but pointed out that “as the son of the equally legendary Professor Abel Wolman, Reds had been a Johns Hopkins man almost literally from birth. He grew up at this university, graduated from Johns Hopkins in 1949 and returned as associate professor and chair of what was then the Isaiah Bowman Department of Geography.”

Abel Wolman, known as the “father of sanitary engineering,” pioneered the chlorination process in public water, helping to bring clean drinking water to people worldwide. His interest in natural resources influenced Reds Wolman’s education and career plans. Reds Wolman received a bachelor’s degree in geology from Johns Hopkins in 1949, then earned his doctorate at Harvard, also in geology.

He worked as a hydrologist for the U.S. Geological Survey from 1951 to 1958, and then was offered the position at Johns Hopkins as chair of Geography. He eventually played a key role in combining that department with the Department of Sanitary and Water Resources to create the Department of Geography and Environmental Engineering within the Whiting School. He chaired DOGEE from 1970 through 1990 and held the B. Howell Griswold Jr. Professorship in Geography and International Affairs from 1975 until his death.

Outside the campus, Wolman conducted important field research with students and colleagues, tramping along waterways making careful measurements regarding flow and depth, stones and soil, and compiling data to help make predictions about future changes in river systems.

“Professor Wolman played a central role in defining rivers in a modern, quantitative and generalizable framework that still provides the standard against which new models and concepts are evaluated,” said Peter Wilcock, a Johns Hopkins professor of geography and environmental engineering. “The understanding and the methods developed in this work form the foundation of modern river geomorphology, engineering and restoration.”

In an interview with <Geotimes> in 2004, after he was honored with the Lifetime Achievement Award from the National Council for Science and the Environment, Wolman said of his research interests, “I went from behavior of natural rivers and how they formed to how they behaved in the environment, which led to water quality and then to a variety of resource policy issues.”

In 1988, when Wolman was elected to the National Academy of Sciences, its citation said, “An innovator in hydrology, geomorphology and geography, Wolman changed thinking about natural landscapes, their human modification and their interactions with societies in several ways. In relating catastrophic with moderate natural events, his ‘magnitude-frequency’ theory is widely accepted among scientists and engineers dealing with rivers, floods and erosion.”

In 2002, Wolman was elected to the National Academy of Engineering, which lauded him for “outstanding contributions to fluvial processes, water resources management and environmental education.”

He also served on many state, national and international panels devoted to environmental and health issues. In recent years, despite health problems that required him to use a walker, he continued to teach and to participate in field excursions.

Family members said that following the private funeral service, interment would be in Druid Ridge Cemetery. In lieu of flowers, the family has requested that memorial contributions be made to The Johns Hopkins University, 126 New Engineering Building, 3400 N. Charles St., Baltimore, MD 21218, to benefit the Department of Geography and Environmental Engineering.