Addition of 2,100 researchers and staff will be complete in about three years. 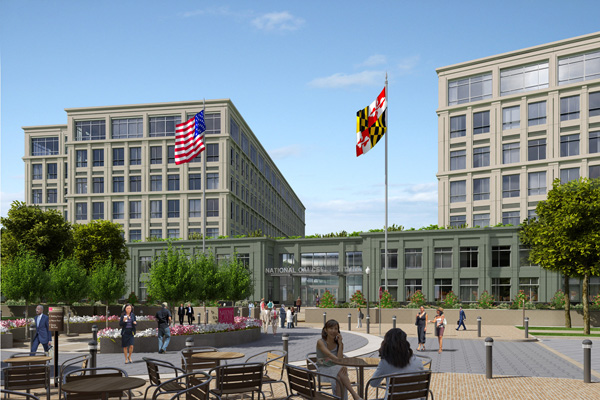 The National Cancer Institute’s twin seven-story buildings will have 575,000 square feet of space and are expected to be completed in about three years.

The National Cancer Institute will soon house about 2,100 researchers and support staff on the Johns Hopkins Montgomery County Campus in the Shady Grove Life Sciences Center in Rockville, Md.

NCI, a part of the National Institutes of Health, will occupy a new facility, consisting of twin seven-story buildings totaling 575,000 square feet of space. They will be completed and occupied in about three years.

“The addition of NCI to our campus makes the Shady Grove area a national epicenter for cancer research,” Johns Hopkins President Ronald  J. Daniels said. “We are excited to be a partner in providing state-of-the-art space for this incredibly important scientific institution and thousands of its employees.”

The NCI facility, which will also include a parking structure wrapped by retail space, will join three existing buildings on the Montgomery County Campus. The campus, which opened in 1988, now serves about 4,000 students, primarily working professionals studying part-time for master’s degrees. Four Johns Hopkins divisions offer more than 50 degree and certificate programs on the campus, which also hosts research facilities and business tenants whose interests mesh with the university’s and county’s focus on the life sciences.

The decision to locate the NCI complex at Johns Hopkins was announced last week by the General Services Administration, the federal agency responsible for the bidding process and selection. GSA selected the JBG Cos., a developer chosen by Johns Hopkins from among several that proposed a partnership with the university. JBG will lease land from Johns Hopkins, build the NCI center and own and manage it after completion.

JBG said its goal is a development that qualifies for LEED Gold certification for environmentally friendly and energy-efficient design and operation. The site is expected to include a stop on a planned mass transit system, the Corridor Cities Transitway, connecting the campus to the Shady Grove Metro rail station and other locations in the I-270 corridor.

The NCI announcement was made, coincidentally, on the same day that President Daniels traveled to Montgomery County to sign a memorandum of understanding with County Executive Isiah “Ike” Leggett [see story at right]. The MOU outlined agreements on how Johns Hopkins—through education, research, technology transfer and other activities—can contribute to the county’s vision of establishing an economic powerhouse based on the life sciences.

NCI’s presence at Johns Hopkins will “serve as a catalyst for the attraction and creation of thousands of new, high-quality jobs as the area transforms into a world-renowned innovation community,” Leggett said.