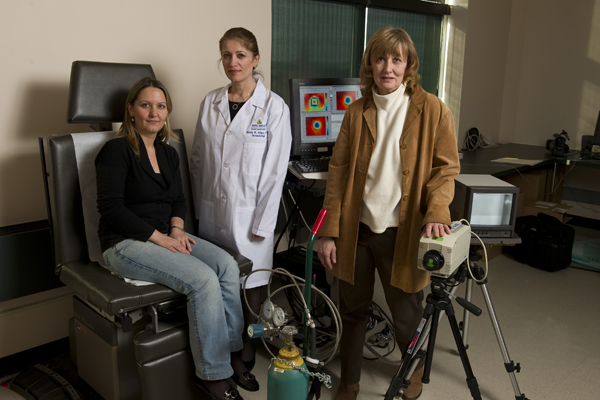 Johns Hopkins researchers have developed a noninvasive infrared scanning system to help doctors determine whether pigmented skin growths are benign moles or melanoma, a lethal form of cancer. The prototype system works by looking for the tiny temperature difference between healthy tissue and a growing tumor.

The researchers have begun a pilot study of 50 patients at Johns Hopkins to help determine how specific and sensitive the device is in evaluating melanomas and precancerous lesions. Further patient testing and refinement of the technology are needed, but if the system works as envisioned, it could help physicians address a serious health problem: The National Cancer Institute estimated that 68,720 new cases of melanoma were reported in the United States in 2009, and it attributed 8,650 deaths to the disease.

To avert such deaths, doctors need to identify a mole that may be melanoma at an early, treatable stage. To do this, doctors now look for subjective clues such as the size, shape and coloring of a mole, but the process is not perfect.

“The problem with diagnosing melanoma in the year 2010 is that we don’t have any objective way to diagnose this disease,” said Rhoda Alani, adjunct professor at the Johns Hopkins Kimmel Cancer Center and professor and chair of Dermatology at the Boston University School of Medicine. “Our goal is to give an objective measurement as to whether a lesion may be malignant. It could take much of the guesswork out of screening patients for skin cancer.”

With this goal in mind, Alani teamed with heat transfer expert Cila (CHILL′-a) Herman, a professor of mechanical engineering in Johns Hopkins’ Whiting School of Engineering. Three years ago, Herman obtained a $300,000 National Science Foundation grant to develop new ways to detect subsurface changes in temperature. Working with Muge Pirtini, a mechanical engineering doctoral student, Herman aimed her research at measuring heat differences just below the surface of the skin.

Because cancer cells divide more rapidly than normal cells, they typically generate more metabolic activity and release more energy as heat. To detect this, Herman uses a highly sensitive infrared camera on loan from the Johns Hopkins Applied Physics Laboratory. Normally, the temperature difference between cancerous and healthy skin cells is extremely small, so Herman and Pirtini devised a way to make the difference stand out. First, they cool a patient’s skin with a harmless one-minute burst of compressed air. When the cooling is halted, they immediately record infrared images of the target skin area for two to three minutes. Cancer cells typically reheat more quickly than the surrounding healthy tissue, and this difference can be captured by the infrared camera and viewed through sophisticated image processing.

“The system is actually very simple,” Herman said. “An infrared image is similar to the images seen through night-vision goggles. In this medical application, the technology itself is noninvasive; the only inconvenience to the patient is the cooling.”

The current pilot study is designed to determine how well the technology can detect melanoma. To test it, dermatologist-identified lesions undergo thermal scanning with the new system, and then a biopsy is performed to determine whether melanoma is actually present.

“Obviously, there is a lot of work to do,” Herman said. “We need to fine-tune the instrument—the scanning system and the software—and develop diagnostic criteria for cancerous lesions. When the research and refinement are done, we hope to be able to show that our system can find melanoma at an early stage before it spreads and becomes dangerous to the patient.”

Alani, the skin cancer expert, is also cautiously optimistic. “We, at this point, are not able to say that this instrument is able to replace the clinical judgment of a dermatologist, but we envision that this will be useful as a tool in helping to diagnose early-stage melanoma,” Alani said. “We’re very encouraged about the promise of this technology for improving our ability to prevent people from actually dying of melanoma.”

The researchers envision a hand-held scanning system that dermatologists could use to evaluate suspicious moles. The technology also might be incorporated into a full-body-scanning system for patients with a large number of pigmented lesions, they said.

The skin cancer scanning system is protected under an international patent application submitted by the Johns Hopkins Technology Transfer office, with Herman, Alani and Pirtini listed as the inventors. No commercialization agreement has been reached, but the technology transfer staff has engaged in talks with investors and medical-device firms concerning possible licensing deals. Any business arrangements involving the inventors would be managed by The Johns Hopkins University in accordance with its conflict-of-interest policies.