Prestigious award will be used for MBA, then international service work. 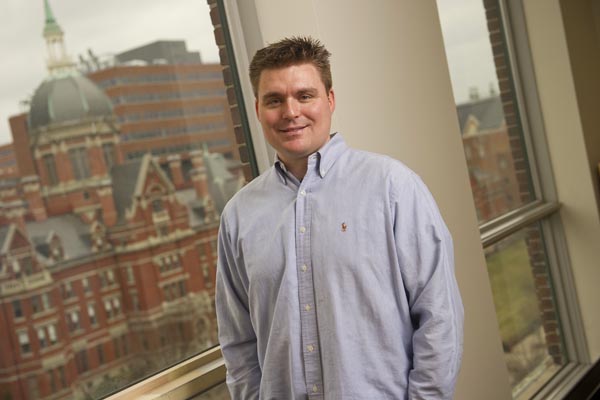 Trevor Ellison, a surgery resident and Public Health PhD candidate, says his Cambridge MBA will give him the skills he needs for international service work. Photo: Will Kirk/Homewoodphoto.jhu.edu

On the eve of his interview for a Gates Cambridge Scholarship, Trevor Ellison crammed as if for a Jeopardy match. The 34-year-old read anything and everything he could, even memorizing national capitals and names of heads of state.

“I was thinking of anything that they could possibly ask me, just crazy things,” Ellison says. “I was really, really nervous.”

Ellison, a graduate of the School of Medicine and currently a third-year general surgery resident at The Johns Hopkins Hospital and a doctoral student at the Johns Hopkins Bloomberg School of Public Health, applied for a Gates scholarship the year before and had not earned an interview. He was determined to make the most of this opportunity. At stake was a scholarship, funded by the Bill & Melinda Gates Foundation, that covers the full cost of studying for up to three years at the University of Cambridge, one of world’s premier research universities. He had been accepted to Cambridge in 2008 but needed financial assistance.

During the interview, held early last month, the four-person panel did not ask Ellison if he knew the name of the prime minister of Bulgaria. Rather, they wanted him to tell his personal story and why he deserved the scholarship. He obviously made a compelling pitch.

Ellison has been named a 2010 Gates Cambridge Scholar, a prestigious honor awarded to just 29 Americans this year and 40 graduate students worldwide. More than 800 applied, and only 104 were granted interviews.

In addition to full tuition, the scholarship covers living expenses and travel fare to and from the United States. Once in residence, Gates Scholars may apply for financial help with costs related to conferences, fieldwork and other activities.

The scholarship began in 2000, when the Gates Foundation announced a donation to the University of Cambridge of $210 million to establish the Gates Cambridge Trust. The gift created an international scholarship program to enable outstanding graduate students from outside the United Kingdom to study at the English university.

The trust awards scholarships on the basis of a person’s intellectual ability, leadership capacity and desire to use his or her knowledge to contribute to the international society.

Since the inaugural class in 2001, the trust has awarded 827 scholarships to students from 85 different countries.

Ellison will use his to attend Cambridge University’s Judge Business School from Sept. 20, 2010, to July 1, 2011, to earn an MBA. He will be joined by his wife, Sarah, and their infant son, Gardner.

He plans to target his MBA study toward establishing an international medical relief rotation, somewhat akin to Doctors Without Borders, for Johns Hopkins’ Surgical Residency Training Program. This new rotation, he says, will tap into “a primed and eager group of talented surgeons” who want to perform enriching international service.

Ellison’s hope is that the program becomes so well established and loved that it serves as a template for other surgical training programs, and that doors to international service are opened more fully to doctors in training.

“A lot of surgical residents want to do this type of work but few can. It often comes down to time and money,” he says. “You might have two weeks off an entire year, and you ask yourself, Do I go home and spend time with my family or go to South America and work in a hospital there? ”

Ellison wants to establish a program for fourth- and fifth-year residents who will spend a one- or two-month rotation at an international location, a program modeled loosely after the University of California, San Francisco Medical Center’s partnership with the nation of South Africa.

“I think people who go overseas will fall in love with that kind of work, and want to do it for the rest of their life,” Ellison says. “They’ll keep returning. At the UCSF program, more than 50 percent return. Even if we get half to go back, that is a success. You are mobilizing a huge force that is waiting and can energize them for the rest of their lives.”

Born in Pittsburgh, Ellison knew early on he wanted to become a surgeon. When he was 12, he asked for a fetal pig dissection kit for Christmas. (Months prior, he had requested an anatomy diagram of the heart, which would come from Johns Hopkins.)

Ellison says he was called to the medical profession indirectly through his older brother, who was born with severe cerebral palsy. Ellison vividly recalls his brother’s numerous doctor visits.

“These doctors were doing everything they could to help him. They performed all these operations on someone who needed help and couldn’t do things for himself. That was the relationship I was turned on to,” he says. “I think becoming a doctor, specifically a surgeon, has always been in the cards for me.”

Ellison’s parents would later adopt two girls from South Korea, one with cerebral palsy and the other with multiple medical conditions.

“I feel that my first and continuing lessons in service were those provided by my parents,” he says. “The lessons of compassion that I learned from them are subtle but constant. It is easy to serve others when my siblings and I have been so well-served by my parents.”

Ellison earned a bachelor’s degree in zoology from Brigham Young University in 2001. While there, he worked in the genetics lab of Laura Bridgewater where, among other work, he set out to define the molecular mechanism of gene activation in a specific collagen gene.

He earned his medical degree from Johns Hopkins in 2005 and then began his residency. In 2009, he began his work toward a PhD in economic evaluation and policy.

Ellison has traveled extensively in Europe, Asia, the Middle East and Central America. After his freshman year at Brigham Young, he took two years off to perform missionary and volunteer work in Spain for his church, and later he participated in a study-abroad program in Israel, Egypt and Jordan. In the summer of 1999, he lived in Honduras to work for a micro-credit lending organization as part of his service for HELP International. In 2005, Ellison and two friends traveled to Sri Lanka to build houses for victims of the 2004 tsunami.

At Johns Hopkins, Ellison has served as a member of the School of Medicine’s curriculum reform and resident review committees, was co-director of the Emergency Medicine Interest Group and established a weekly dinner for surgical residents and faculty. Since 2008, he has helped compile a database of 20 years of Johns Hopkins experience with treating pancreatic neuroendrocrine tumors.

Ellison says that a Cambridge MBA will provide the skills necessary to organize, finance, manage and sustain an international service program. After returning from England, he plans to complete his doctoral degree and residency, with the ultimate goals of becoming a surgical oncologist and spending time in overseas volunteer efforts.

To apply and prepare for the Gates Cambridge Scholarship, Ellison worked with John Bader, associate dean for undergraduate academic affairs in the Krieger School and national scholarships adviser.

“I am thrilled for Trevor,” Bader says. “Spending a year in Britain will be a great experience for him and his family. Just as important, this is a milestone for Hopkins. We have never had a hospital resident win such a prestigious award—but that’s because none of them have tried. I hope Trevor’s experience inspires nontraditional candidates—nurses, part-time students, education and business students, residents and others—to apply for the Gates, as well as the Fulbright, Mitchell, Madison and Luce awards.”