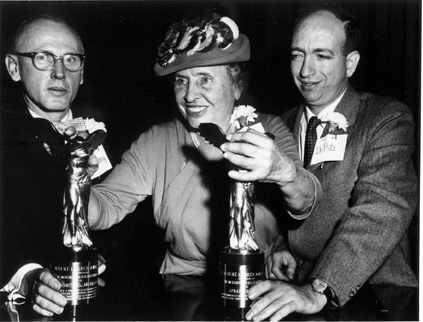 Arnall Patz, director emeritus of the Wilmer Eye Institute at Johns Hopkins, a pivotal figure in the history of ophthalmology and the recipient of both a Presidential Medal of Freedom and an Albert Lasker Award—often called the “American Nobel”—for his groundbreaking research into the causes and prevention of blindness, died on March 11. Patz, who died in his sleep at his home in Pikesville, Md., was 89.

A member of the Johns Hopkins medical faculty since 1955, Patz was widely honored for his lifetime contributions to ophthalmology, including the discovery of the cause of retrolental fibroplasia, now called retinopathy of prematurity or ROP, an affliction of premature infants that once was the most common reason for childhood blindness. He also was known for his development of one of the first argon lasers used to treat diabetic retinopathy and age-related macular degeneration.

Patz led the Wilmer Eye Institute from 1979 to 1989 and had been an active professor emeritus until his death. He was known for encouraging the work of young physicians who went on to become internationally acclaimed eye specialists.

“Dr. Patz’s influence in ophthalmology as a clinician, researcher and mentor will be powerful and long-lasting,” said Edward D. Miller, dean of the Johns Hopkins University School of Medicine and CEO of Johns Hopkins Medicine. “He graced the school and hospital for more than half a century, and we are enormously proud to have his extraordinary contributions as part of our history.”

“Dr. Patz will always be considered by his peers and those throughout our profession as a man who contributed so critically to preserving sight,” said Peter J. McDonnell, current director of Wilmer and once a resident at Johns Hopkins who was mentored by Patz. “His inspiration and leadership of fellow professionals, along with his guidance and encouragement to all of our medical students, made us fortunate to know him.”

Born on June 14, 1920, in rural Elberton, Ga., Patz received his undergraduate degree from Emory University in Atlanta and graduated from its medical school in 1945. After service during World War II, he joined the eye clinic at the Walter Reed Army Hospital, then began his residency in ophthalmology at the District of Columbia General Hospital.

While there, he observed more than 20 premature infants who had severe ROP, noting that many of them had received high levels of oxygen. He found that they had an abnormal overgrowth of blood vessels in the eye that caused irreparable damage to the retina and frequently led to blindness. With Leroy Hoeck, pediatric chief of the nursery, he conducted what many considered one of the first controlled clinical trials in American ophthalmology, to test his belief that the excessive exposure to oxygen caused the condition in preemies. Initially denied research funding for his pilot experiments on premature infants, he funded his first tests with money borrowed from his brother Louis. Subsequent studies in collaboration with Everett Kinsey, a physician and famed biochemist, confirmed Patz’s theory.

Patz’s findings proving the link between high levels of oxygen and ROP led to a change in pediatric practices that subsequently saved the sight of countless infants.

Following his work on ROP, Patz studied ways to stop the leaking and overgrowth of blood vessels in the retina, a condition associated with many diseases. Recognizing the potential of lasers to seal the leaking and stop the overgrowth of these blood vessels, Patz developed the argon laser with the help of colleagues at the Johns Hopkins Applied Physics Laboratory. Their work paved the way for sight-saving treatment of many degenerative eye conditions, including diabetic retinopathy, age-related macular degeneration and retinal tearing.

Patz maintained an extensive private ophthalmology practice while serving as a part-time faculty member at Johns Hopkins for 15 years before the Seeing Eye Foundation awarded him a research professorship at Wilmer in 1970, when he joined the faculty full time as founder of Johns Hopkins’ Retinal Vascular Center. During his decade as the fourth director of Wilmer, he oversaw enlargement of its clinical and research facilities and programs, ensuring its continued advances as one of the world’s renowned eye care and research centers.

Morton F. Goldberg, another of Patz’s protégés and his immediate successor as director of Wilmer, called him “an exceptional colleague and friend, whom I consider to be one of the greatest ophthalmologists and greatest human beings in modern medicine. It was his passion, as well as his brilliance, that made him a great researcher and clinician and, most importantly, a mentor to all of us who learned and worked with him.”

When he was presented with the Presidential Medal of Freedom in 2004, Patz was acclaimed by President George W. Bush as “the man who has given to uncounted men, women and children the gift of sight.”

“For more than a half-century, his name has been the gold standard in the field of researching the causes and treatment of eye disease,” his citation read.

A modest man despite his remarkable achievements and the acclaim he received, Patz demurred when praised. Asked his reaction to his Medal of Freedom award, he said, “I was astonished, totally overwhelmed and honored. And I could name 50 other medical scientists who probably deserve it more than I do.” He later said that getting a chance to meet golfing legend Arnold Palmer at the White House ceremony where they both received the Medal of Freedom was as astounding as receiving the medal itself.

In addition to the Lasker and Medal of Freedom awards, Patz received the Friedenwald Research Award in 1980, the inaugural Isaac C. Michaelson Medal in 1986, the first Helen Keller Prize for Vision Research in 1994 and the 2001 Pisart International Vision Award from the Lighthouse International.

Always intellectually curious, he earned a master of liberal arts degree from the Johns Hopkins School of Arts and Sciences when he was 78. He spent summers in Maine at a log cabin he built with his family, and was an avid fly fisherman and a ham radio operator serving the Maryland Eye Bank.

Patz is survived by his wife, Ellen, five children and eight grandchildren.

Filed under Around Hopkins, Obituaries