Ground-based telescope will be shipped to a perch in Chile’s Atacama desert. 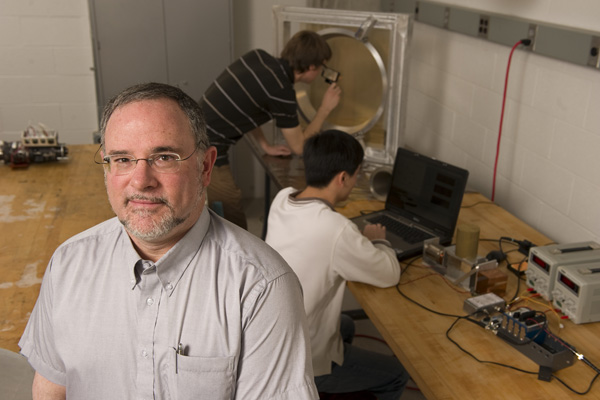 Chuck Bennett and graduate students Joseph Eimer and Lingzhen Zeng in the Bloomberg Center space where they will build the ground-based instrument called CLASS. Photo: Will Kirk/Homewoodphoto.jhu.edu

A team led by a Johns Hopkins astrophysicist has won a $5 million National Science Foundation grant—administered through the stimulus act—to build an instrument designed to probe what happened during the universe’s first trillionth of a second, when it suddenly grew from submicroscopic to astronomical size in far less time than it takes to blink your eye.

The instrument, which is expected to require five years to build, will have the capability to measure the “cosmic microwave background radiation” over large swaths of the sky, according to Charles “Chuck” Bennett, professor in the Henry A. Rowland Department of Physics and Astronomy in Johns Hopkins’ Krieger School of Arts and Sciences.

After being built at Johns Hopkins, the ground-based telescope will be shipped to a perch in Chile’s Atacama desert.

“Miraculously enough, it is within our ability as humans to probe back into the first moments of the universe and learn what happened then,” said Bennett, a member of the National Academy of Sciences who has won several prestigious honors, including the 2009 Comstock Prize in Physics, the 2006 Harvey Prize and the 2005 Henry Draper Medal.

Starting with his work on the Cosmic Background Explorer satellite and continuing by leading the Wilkinson Microwave Anisotropy Probe, also known as WMAP, space mission, Bennett has spent his career probing the cosmic microwave background, which is the remnant afterglow light that lingers, much cooled, from the universe’s energetic beginnings 13.7 billion years ago. In 2009, papers about WMAP were the most cited scientific papers in the world across all scientific disciplines, not just in physics and astronomy.

Called the Cosmology Large Angular Scale Surveyor, or CLASS, the new instrument is expected to search the microwave sky for a unique polarization pattern predicted to have arisen in the infant universe. More specifically, it will help researchers determine the veracity of a theory called “inflation,” which posits that the universe expanded from infinitesimal to astronomical in size in an astonishingly short time.

“This burst left ripples—what we call gravitational waves—in the fabric of space, and those ripples in space cause the cosmic background light to be polarized in a particular and unique kind of pattern,” Bennett said. “Looking at that pattern will tell us if the inflation idea is right—or wrong! And the details of what we see will inform us about what kind of inflation happened.”

Bennett, his colleagues and his students are hard at work developing the state-of-the-art technologies needed for the instrument, which will be built in the basement of the Bloomberg Center for Physics and Astronomy on the Homewood campus.

“Thanks to my graduate students, Joseph Eimer and Lingzhen Zeng, we were ready when opportunity arose,” Bennett said. “We are really building [the instrument], screwdrivers and all.”

The project is expected to support an additional 39 full-time employees, plus graduate students, over the course of the five-year grant.

Bennett’s team’s investigations are among the 364 stimulus-funded research grants and supplements totaling almost $180 million that Johns Hopkins has garnered since Congress passed the American Recovery and Reinvestment Act of 2009 (informally known by the acronym ARRA), bestowing the National Institutes of Health and the National Science Foundation with $12.4 billion in extra money to underwrite research grants by September 2010. The stimulus package—which provided $550 billion in new spending, including the above grants—is part of the federal government’s attempt to bring back a stumbling economy by distributing dollars for transportation projects, infrastructure building, the development of new energy sources and job creation, and financing research that will benefit humankind.

To date, 117 staff jobs have been created at Johns Hopkins directly from ARRA funding, not counting jobs saved when other grants ran out, and not counting faculty and grad student positions supported by the ARRA grants.