Making a case for Archaeology

University’s collection will be showcased in Gilman Hall museum 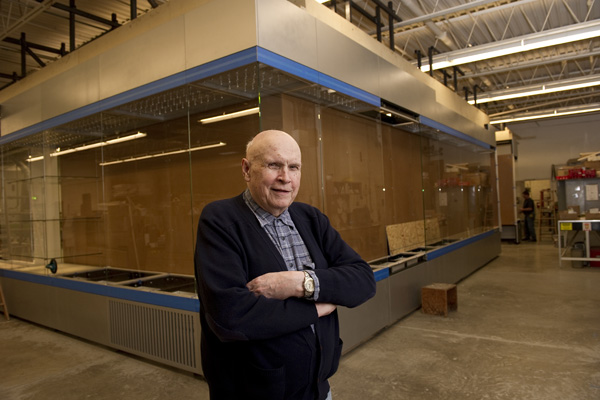 Helmut Guenschel in his Middle River, Md., plant with the display cases being built for Gilman Hall’s new first-floor museum space. They were recently broken down and shipped to the site, where their installation will start this week. Photo: Will Kirk/Homewoodphoto.jhu.edu

On a recent trip to Guenschel’s plant in Middle River, Md., the German-born engineer showed off a demonstration model, a giant door–sized panel that magically glides on a single hinge the size of a bar of soap. Starting next fall, visitors to Johns Hopkins’ Homewood campus can see the engineering marvel up close, although they are sure to be even more taken with the works of antiquity behind the glass.

Guenschel’s company was hired to fashion the conservation-grade display cases and cabinets for Gilman Hall’s new first-floor, glass-walled museum space, designed by Kliment Halsband Architects for the exhibition and study of the university’s archaeological artifacts.

The collection—founded in the 19th century through the interest of the university’s first president, Daniel Coit Gilman—features several thousand ancient objects, including Greco-Roman and Near Eastern pieces that date from pre-dynastic Egypt into the Byzantine and Islamic periods. They serve as primary resources for study and research in art history, Near Eastern studies, classics, Romance languages and more. When Gilman Hall reopens this summer, the collection will also serve as a focal point for the building’s inhabitants and visitors, who will be able to see a portion of the collection from the hallways.

The bulk of the collection was previously stored in two crowded and dimly lit first-floor rooms in Gilman that had very limited display capacity.

Marty Kajic, Gilman project manager for the Zanvyl Krieger School of Arts and Sciences, says that incorporating a sizable, and conspicuous, archaeological museum and study area into the renovation design was the plan from day one. Specifically, the university wanted a more expansive and flexible space for the exhibition and study of its objects.

“In the old Gilman, the collection was tucked away out of sight with not many people knowing about it,” Kajic says. “We wanted to bring it out into the light and make it a more prominent collection.”

Helmut Guenschel Inc. has long been renowned for its high-quality modular exhibition systems, display cabinets and cases, and other custom fabrication. A specialist in exhibition space for more than 40 years, the company boasts an extensive client list that includes New York’s Metropolitan Museum of Art, the National Gallery of Art in Washington, D.C., the Colonial Williamsburg Foundation, the Seattle Art Museum, the J. Paul Getty Museum in Los Angeles and several major universities.

No stranger to Johns Hopkins, Guenschel had previously crafted display cases for the Sheridan Libraries and architectural woodwork in the Bloomberg Center for Physics and Astronomy and, for The Johns Hopkins Hospital’s 100th anniversary, renovated the arched Broadway entrance to its Billings Administration Building.

The company’s founder and namesake emigrated from Dresden, Germany, in the 1950s to grab a piece of American prosperity. Guenschel says he arrived in Hoboken, N.J., with just $20 in his pocket, which he used for a Greyhound Bus ride from Manhattan to Baltimore, heading here for its strategic location between New York and Washington and for its strong industrial roots.

“I still remember sitting in the bus going over the single span of the Delaware Memorial Bridge,” says Guenschel, an imposing man with a friendly smile who still carries his German accent. “I looked around and thought to myself, I can make it here.”

Guenschel would go on to take some chemistry courses at Johns Hopkins and, in 1962, earn a civil engineering degree from the University of Maryland. He opened his company in 1964 in a 3,600-square-foot space located in the Highlandtown area of Baltimore. Five years later, he moved to the current 30,000-square-foot plant in Middle River.

For the new Johns Hopkins archaeological museum, a 1,600-square foot space located directly below Gilman Hall’s atrium courtyard, Guenschel is crafting the most prominent feature—display cases that will form the perimeter of the museum. The cases, each 40 feet long and 11 feet tall, are made mostly of metal and imported double-sided polished glass that features a low iron content to minimize the greenish tint found in most glass.

“We used this glass so that the artifacts can be seen more clearly,” says Cynthia Shaffer, vice president and general manager of Helmut Guenschel. Shaffer said that the glass also filters the ultraviolet light and, for security and safety, has a laminated inner layer of safety glass, which won’t shatter in or out.

A thousand fiber-optic light fixtures designed by Guenschel will shine on the objects displayed in the cases; linen-covered center dividing panels will obstruct the view from the hallways into the museum, prohibiting it from becoming one big fish bowl. The light fixtures won’t emit heat upon the objects, which will be in a humidity-controlled and sealed environment, thanks to those patented hinges.

The perimeter cases feature metal base cabinets with 42 glass-covered specimen drawers for small objects such as pottery fragments, bronze figures and scarabs.

In addition to the perimeter cases, Guenschel has designed three free-standing cases for the center of the museum. Those cases will serve as space for rotating exhibits and will also feature objects from the Ancient Americas.

Guenschel’s staff installed the cases in a full-size mock-up of the museum space in its plant, and then took them apart piece by piece for transport. It will take 10 to 12 weeks to reassemble them inside Gilman. Work begins this week.

Betsy Bryan, the Alexander Badawy Professor in Egyptian Art and Archaeology, says that when the museum space opens, a new era will begin for archaeological study at the university.

“For the first time we will be able to telegraph what we have in terms of objects that belong to the university,” she says. “I believe it will also jump-start the involvement of students working with the objects, especially since we now have a museum studies minor and an archaeology major.”

The exterior side of the perimeter cases will contain a semipermanent display of some of the collection’s highest-quality pieces, according to Eunice Dauterman Maguire, curator of Johns Hopkins’ archaeological museum and a senior lecturer in the History of Art Department.

“The design of the space will show off some of the highlights, on display to everyone who walks in any direction around the new central atrium at the heart of the renovated Gilman,” Maguire says. “The spectacularly big glass cases, with the open space and glass roof above, will shed light at last on many ancient objects and works of art that have been waiting for decades in the dark.”