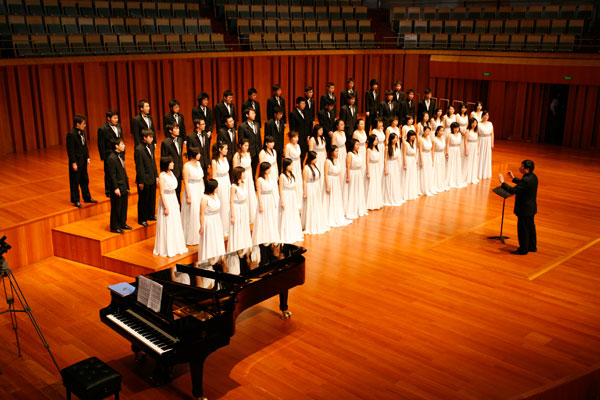 China’s renowned Peiyang Chorus of Tianjin University will perform at 7 p.m. on Tuesday, March 23, in Johns Hopkins’ Shriver Hall Auditorium as part of an East Coast tour at the invitation of seven U.S. universities to promote cultural exchange between academic institutions in China and the United States. Other campuses on the tour are George Washington University; Indiana University–Purdue University Indianapolis; Indiana University, Bloomington; University of Delaware; Youngstown State University; and University of Chicago.

Eric Beatty, director of Homewood Arts Programs, has been planning this concert for several months with recent alumna Xiaonan Kou. “I am thrilled to be able to present such a prestigious university chorus from China here at Johns Hopkins,” Beatty said. “Ms. Kou and I know our audience will enjoy this truly international and collaborative concert.”

Peiyang Chorus is the official choral society of Tianjin University, the first modern university in China, established in 1895. The group was formerly known as Peiyang Singing Group, and later as Tianjin University Chorus, and adopted its present name in 1985. It has been awarded seven gold medals in international choral competitions and honored by the International Federation for Choral Music as a world-class chorus. The group consists of undergraduate and postgraduate students from different fields of study.

For the past two decades, Peiyang Chorus has offered performances in more than 20 countries and regions. It has performed nearly 1,000 Renaissance, baroque, classical, romantic, modern and contemporary choral compositions, many of which it introduced to Chinese audiences. It also performs numerous operettas, symphonic choral compositions and Chinese folk songs.