For Mark Selivan and his crew, the first week of spring is showtime 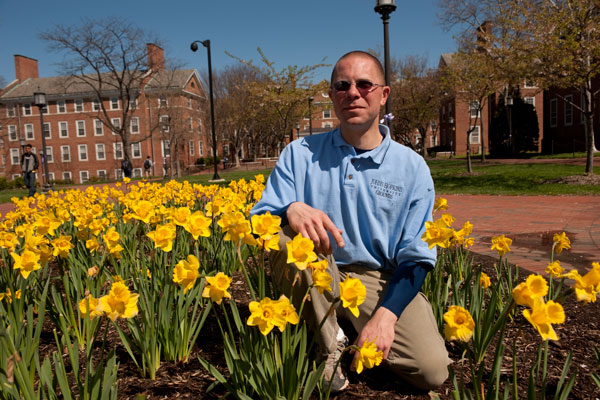 Mark Selivan loves to take time out of his day to smell the roses. To be fair, he gives equal opportunity to the tulips, daffodils, crocuses, magnolias and other colorful blooms that have popped up across the Homewood campus.

No surprise that Selivan, the university’s grounds manager, revels in the onset of spring. The native New Englander particularly looked forward to this year’s blossoms. In an effort to inject more color, the grounds crew had planted new flower beds all across the campus. The result will be a potpourri of yellows, pinks, creamy whites, lavenders and other pastels.

When he applied his brush strokes, Selivan made sure to heavily populate the campus with native species such as black-eyed Susans, viburnums, Shasta daisies and others as part of his overall effort to craft a beautiful but easy-to-maintain campus.

Selivan joined Johns Hopkins in August 2006 and brought with him a conservative, environmentally friendly landscape philosophy that attempts to maximize Nature’s own defenses and resiliency yet not sacrifice good looks.

In his first year, he overhauled the existing plant health care plan for the campus and revamped the approach to tending trees and shrubs. Of note, he took an already strong irrigation system and made it even more dynamic. He appointed Robert Stafford as irrigation manager, or “Dr. Hydraulic,” as Selivan likes to call him. “He is a walking CPU when it comes to our operations and needs for water,” Selivan said. Now in use throughout the campus are hidden spouts that sense when the soil needs moisture and disperse just the amount needed to keep the lawns, plants and trees healthy.

Selivan also instituted a new pest management system that breaks the campus into zones, with a grounds-crew member assigned to each. If a problem is spotted, a horticulturist or turf specialist will be called in to diagnose and treat it if necessary, and even then using only low-threshold, low-impact pesticides.

Selivan also lauds the work of Richard Gutberlet, the university horticulturalist, who brought 20-plus years of design and growth experience with him to Johns Hopkins.

“Rich and Brian form with myself a triad of horticultural power and knowledge that has made this growing feat of Hopkins a success,” he said.

The 12-member grounds crew takes extra care to prune, feed and mulch correctly. Like a person who eats right and gets plenty of exercise, well-cared-for plants and trees are healthier and more resistant to diseases, Selivan says.

“We encourage the plants and soil to work for us. In everything we do, we want to be more responsible and more caring of the environment,” says Selivan, who walks the grounds each day to inspect his handiwork. “That means not overfertilizing, like some do, to get those nuclear-green lawns, or [not] bringing in plants that look good on paper but require an inordinate amount of care.”

Prior to joining Johns Hopkins, Selivan worked for SavATree, a New England–based tree, shrub and lawn care company. In his work as its regional operations manager and resident arborist, he had several VIP clients, including Martha Stewart.

Selivan enjoyed his time with SavATree, he says, but eventually grew weary of the travel and wanted to figuratively and literally plant his roots somewhere else. The job opened up at Johns Hopkins, and in his interview, he says, he immediately hit it off with David Ashwood, Homewood’s director of plant operations.

“David and I share a similar mentality when it comes to grounds keeping,” Selivan says. “We want it to look good, but do so with minimal fuss and minimal environmental impact.”

Although he’s in charge of the entire 140-acre campus, Selivan still dons his tree-doctor scrubs on occasion to, for example, inject hypodermic needles into at-risk trees or hook up IVs for others. “We treat them from the inside out,” he says. “It’s yet another way to reduce the amount of product exposed to the rest of the environment.”

New plant beds include those in front of the Fresh Food Cafe, on the east side of Mason Hall and several in the upper and lower quads. In keeping with the pedestrian nature of the campus, the bed sizes were minimized to not invite trampling. Likewise, Selivan often chooses tougher species that can withstand some of the daily wear and tear of a college campus.

Not that he takes kindly to crushed flowers or torn-up turf.

“That’s definitely a sore spot for me,” says Selivan with a smile. “But it comes with the territory.”