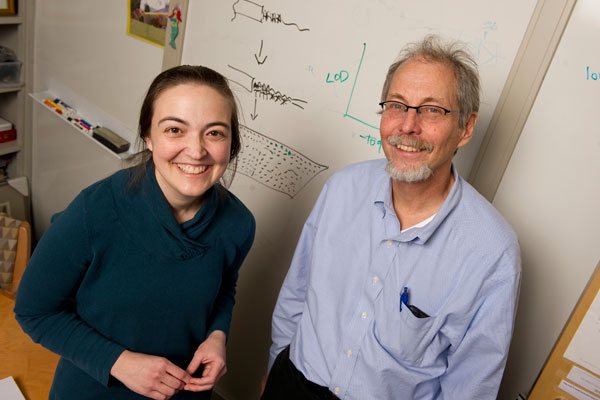 Kathleen Burns and Jef Boeke lead teams at the School of Medicine that are examining how transposons contribute to human genetic diversity. Photo: Will Kirk/Homewoodphoto.jhu.edu

Sequencing the human genome was just one step in understanding our biology; researchers still know very little about the function of most of our DNA. Now, a team of researchers at the Johns Hopkins School of Medicine has been awarded $1 million in stimulus funding to examine how certain mobile segments of DNA known as transposons contribute to human genetic diversity, by mapping transposon locations in more than 100 people over the next two years.

“Transposons contribute to human genetic diversity in ways we are just beginning to understand,” said Jef Boeke, professor of molecular biology and genetics, and director of the High Throughput Biology Center at the Institute for Basic Biomedical Sciences at Johns Hopkins. “We hope this work will provide the basis for future research looking at how transposons affect health and disease.”

In addition to genes that code for proteins, which make up only a small fraction of our genomes, our DNA also contains so-called “junk DNA,” regulatory elements that control gene function and sequences involved in maintaining chromosome structure. Some of these regions have been difficult to sequence and are only partially included in the current human genome draft. Transposons are in this category, existing in many copies and in different places in each individual.

The teams of Boeke and Kathleen Burns have developed a new method for identifying a group of these sequences, the L1(Ta) LINE (long interspersed element) transposons. Several hundred thousand LINE elements are found in the human genome, and their locations vary from one person to the next. LINE transposons can move and, depending on where in the genome they land, can change the activity of a nearby gene. These changes in gene function can in part lead to differences between people.

“We are delighted about this award,” said Burns, an assistant professor of pathology and oncology and a lead investigator on the grant. “It is a great assist in bridging the basic science of transposon biology—where Jef Boeke and his group have been major leaders—with clinical human genetics.”

The investigation is among the 364 stimulus-funded research grants and supplements totaling almost $180 million that Johns Hopkins has garnered since Congress passed the American Recovery and Reinvestment Act of 2009 (informally known by the acronym ARRA), bestowing the National Institutes of Health and the National Science Foundation with $12.4 billion in extra money to underwrite research grants by September 2010. The stimulus package—which provided $550 billion in new spending, including the above grants—is part of the federal government’s attempt to bring back a stumbling economy by distributing dollars for transportation projects, infrastructure building, the development of new energy sources and job creation, and financing research that will benefit humankind.