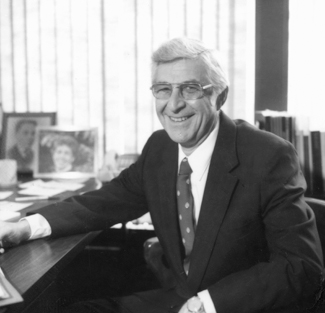 Henry Seidel in an undated photo.

Henry M. Seidel, professor emeritus of pediatrics and a dean of students at the Johns Hopkins School of Medicine, and a master educator who shepherded generations of Hopkins medical students through their training, died at his home in Columbia, Md., on March 24. He was 87 and died of complications from lymphoma.

Seidel joined the faculty of the School of Medicine in 1950 and became an attending pediatrician at The Johns Hopkins Hospital in 1953, spending virtually his entire professional career at Hopkins. Acclaimed as a “pediatrician’s pediatrician,” he continued to see patients and teach students for nearly 20 years after he retired formally at the age of 68.

In the nearly seven decades that he spent at Johns Hopkins, Seidel became an indispensable force in the institution. He was revered by fellow pediatricians and loved by students, many of whom never ceased to seek his professional wisdom and personal advice long after they had become physicians and faculty members.

Born in Passaic, N.J., Seidel first arrived at Johns Hopkins in 1938 as an undergraduate, earning his bachelor’s degree in 1943 and his medical degree in 1946.

For 15 years after his residency, Seidel split his time between private practice and his academic interests at Johns Hopkins. In addition to his appointments in the School of Medicine and at The Johns Hopkins Hospital, he became a faculty member at the School of Public Health in 1969.

“Henry was the best that Hopkins could be,” says Edward D. Miller, dean of the School of Medicine and CEO of Johns Hopkins Medicine. “All you had to do was to look into his eyes, listen to his voice and know that you were in the presence of a wonderful person who just happened to be a doctor. He inspired medical students, house staff and faculty to be their very best, and to do it with humility. I will miss seeing him walking the halls of Hopkins.”

Describing pediatrics as his vocation and his avocation, Seidel prized community pediatrics, the kind practiced on the front lines. His interest in it, he said, was ignited by the family pediatrician he saw as a child.

Remembering him in a 2002 essay in the Journal of the American Medical Association, Seidel wrote, “After poking me a bit and looking into my ears and throat, he would pull a leather case from his bag. It was in my child’s mind’s eye huge. When opened, it presented a double row of small bottles filled with variegated pills.” Only years later did Seidel realize that his doctor, the renowned poet William Carlos Williams, had been offering his young patient sugar pills.

Years later, Williams penned a letter of recommendation for Seidel to go to medical school, describing him as “a boy of intelligence, industry and excellent character.”

During his 13 years—1977 to 1990—as dean of student affairs at the School of Medicine, Seidel guided future physicians not only through the labyrinth of their medical training but also through personal crises. Former students recall that in counseling them, Seidel would sometimes use the same techniques he normally reserved for his pediatric patients.

“It worked, but I was chuckling inside that this technique he’d perfected for children worked just as well on a medical student who thought he was a grown-up,” said School of Medicine alumnus Edward “Ted” Trimble in a 2008 interview for Hopkins Medicine magazine.

“Henry was my teacher, mentor, role model, friend,” recalls John M. Freeman, professor emeritus of pediatrics and neurology in the School of Medicine and former chief of Pediatric Neurology and Pediatric Epilepsy at Hopkins Children’s. “He was the model of the compassionate physician and left his mark on generations of students, house staff and even faculty. He taught me to listen, to care more deeply and to be more compassionate. When in need, he was the one I could turn to. He cannot be replaced and is sorely missed.”

Seidel endeared himself to class after class of students during the angst-ridden process of national Match Day, a single day in which all medical school graduates in the United States learn where they will pursue residency training. Historically, matches would be posted for all to see, leaving a few students at risk of being embarrassed at not receiving a match. Seidel ordered individual envelopes for each student, affording more privacy. In the days leading up to Match Day, he consulted hospitals around the country to find places for students who had not beem matched.

Getting to know a student’s personal history, Seidel said, was just as important as getting to know a patient’s medical history before making a diagnosis. Explaining his approach in a 2001 essay for Hopkins Medicine, Seidel said that whether dealing with a 10-year-old with an unexplained fever or a 22-year-old struggling with pathology course work, he would invariably start out with a personal “tell me about you.”

“Henry Seidel was one of the most important influences on me in medical school, a true role model,” Chessin says. “He truly was the pediatrician for all of us medical students. He cared for all of us and cared about all of us. I always hoped I could live up to the type of physician and human being he was.”

“As if it were no more complicated than breathing, Henry Seidel allowed everyone he came in contact with to feel that he cared for them as an individual,” says David Nichols, vice dean for education at the School of Medicine and professor of anesthesiology and critical care medicine and of pediatrics. “It is for that reason that generations of pediatricians and students learned the ideal embodiment of the physician, because they had seen it in Henry Seidel.”

Like all good clinicians, Seidel knew that medicine is not an exact science. He taught his students that the human condition is marked by variability. He warned students of the perils of being too exact or too mechanical in their diagnosis and treatment, advising them to acknowledge uncertainty. He urged young doctors not to be afraid to share that uncertainty with their patients and instead to “enlist the patient as an ally in the pursuit of solutions,” he wrote in a 2007 essay for JAMA.

Taking a patient history and doing a physical exam, Seidel believed, should always involve “the story of a person, unique in time, not just a patient with a chief complaint.”

According to longtime colleagues, Seidel believed that a doctor’s mission was not only to treat the sick but also to better the system that sometimes failed those who needed it most. A true humanist, he believed empathy to be at least as important a skill for a doctor as clinical expertise and scientific knowledge.

Among his many contributions to medical education was co-authorship of a now-classic textbook, Principles of Pediatrics: Health Care of the Young. With his colleague Leon Gordis, Seidel developed a course for the Johns Hopkins curriculum that focused on social, economic and policy aspects of medical care.

“Henry was a nearly daily presence at resident and student conferences, and his comments and questions always forced us to think beyond the medical issues of a patient being discussed,” says Julia McMillan, director of Residency Training at Hopkins Children’s. “His questions reminded us that each child belonged to a society, a culture and a family that both influenced the illness and would be influenced by it.”

As dean of students, Seidel believed in a socially diverse student body recruited from all walks of life. Fearing that H.L. Mencken’s view of medicine as a rich man’s sport might be all too prophetic, Seidel argued for and encouraged careful and controlled distribution of scholarship funds.

Seidel encouraged his fellow physicians to educate lawyers, judges and legislators about children’s rights. He was an expert on the special needs of adopted children and their parents, and in the 1970s he sat on the American Academy of Pediatrics’ task force for the care and evaluation of thousands of Vietnamese orphans.

In 1990, at the age of 68, Seidel retired to emeritus status, but the thought of a leisurely life lacking intellectual challenges left him so anxious that he approached the director of Pediatrics to request a continuing role in the department in exchange for office space, a parking spot and a part-time secretary, but no salary. The deal was sealed. Seidel spent the next 17 years at Johns Hopkins attending lectures, teaching students, sitting in on case conferences, seeing patients and continuing to learn. “Any age, certainly 68, is too young to stop learning,” he wrote.

Despite his vast knowledge and experience, Seidel said that he had as much to learn from his younger colleagues as they did from him. “The learning by this older pediatrician has had to be deliberate, often difficult, paced and earnest,” Seidel wrote, thanking his younger colleagues for the daily challenges they offered him as “a delicious justification just for being in it with them.”

Seidel was also an attending physician at Sinai Hospital of Baltimore between 1953 and 1968 and part-time instructor in pediatrics at the University of Maryland.

In 1969, then Hopkins Hospital President Robert Heyssel asked Seidel to pioneer an early version of a health maintenance organization in the new town of Columbia, Md., that came to be known as the Columbia Medical Plan. He was instrumental in starting Howard County General Hospital and served on its board until his death.

He also was on the board of Outer Cape Health Services on Cape Cod.

Seidel served in the U.S. Army from 1948 to 1950. In 1966 he did a tour of duty aboard the S.S. Hope when the famed hospital ship sailed on a teaching and treatment mission to Nicaragua. In 1971 he did a similar tour in Jamaica. Seidel also worked for the international humanitarian Project HOPE on a Navajo reservation in Arizona.

Seidel authored or co-authored more than 70 papers and numerous books and book chapters. He was the lead author of the acclaimed Mosby’s Guide to Physical Examination for more than two decades. The seventh edition was published shortly before his death.

He was the recipient of the Outstanding Educator Award of the Maryland Association for Higher Education.

For many years, Seidel and his wife, May Ruth, divided their time between Columbia and Cape Cod.

In addition to his wife, Seidel is survived by three sons, Robert, Stuart and Steven; two daughters-in-law, Mary Seidel and Adria Steinberg; and two grandsons, Samuel Seidel and Adam Seidel.

A celebration of Henry Seidel’s life was held on Sunday at the Vantage House in Columbia. A memorial service will be held at Johns Hopkins sometime this spring, family members said.