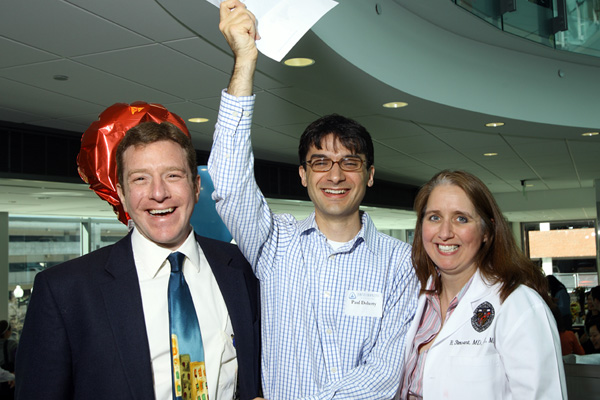 On Match Day, Paul Doherty, center, celebrates his acceptance as one of the four inaugural members of the Johns Hopkins Internal Medicine–Pediatrics Urban Health Residency Program. With him are Leonard Feldman, the program’s director, and Rosalyn Stewart, its associate director. Photo: Keith Weller

Before he came to Johns Hopkins to study medicine, Paul Doherty worked for a number of years in an HIV/AIDS clinic in Washington, D.C. There, Doherty regularly met people without reliable access to health care, with no stable income or, in some cases, no home to return to.

“The work there is very challenging, and can be disheartening at times,” said Doherty, a fourth-year student at the School of Medicine who worked at the clinic first in legal services and later on a medical research study. “But for people who have HIV, or other illnesses, there is so much good work to be done. I learned there that I wanted to dedicate myself to addressing urban health issues.”

Johns Hopkins offered Doherty an opportunity to do just that, and he leapt at the chance.

Doherty is one of four medical students chosen for the recently launched Johns Hopkins Internal Medicine–Pediatrics Urban Health Residency Program, believed to be the first of its kind. He learned the news of his placement on March 18, the National Residency Matching Program’s Match Day 2010.

The combined internal medicine and pediatrics residency program is designed to create physician leaders of urban primary care on a local, state and national level. The program’s founders want to train “change agents” who can provide comprehensive, coordinated and person-focused care for inner-city patients of all ages.

“We want to activate people who love primary care medicine and want to fulfill its central role in delivering care, particularly in an urban, low-income setting,” said Leonard Feldman, the program’s director and an assistant professor in the School of Medicine’s Department of Internal Medicine. “The people who go through this innovative new program might go on to run a health center, be a city health commissioner, start a new health care clinic for the homeless. We want to produce primary-care leaders.”

In addition to Doherty, the inaugural class of residents includes two students graduating from Yale University and one from Harvard. All four—who were chosen from an applicant pool of 160 medical students from the United States and Canada—will receive six years of specialized training.

Starting July 1, they will learn how to care comprehensively for patients throughout the entire life cycle, and how to manage the health problems—from high blood pressure and diabetes to alcoholism, AIDS and domestic violence—that plague the inner-city poor.

The traditional internal medicine and pediatrics curriculum will be coupled with enhanced outpatient care and urban health experiences related to the needs and problems prevalent in urban settings.

Rosalyn Stewart, associate director of the program and an assistant professor in both Internal Medicine and Pediatrics, said that people in underserved areas often deal with a myriad of obstacles that get in the way of effective and regular health care.

“They might be victims of domestic violence, have drug abuse issues and have either no insurance or incomplete coverage, such as no prescription coverage. Financially, they might be really struggling,” Stewart said. “In order to better serve this population, you need to understand these problems.”

Stewart said that she and Feldman were pleasantly surprised at the high number of applications.

“I think the fact that this many applied to a residency in primary care in an urban setting bodes well for the future of primary care,” she said. “There’s certainly a rising interest in global health these days, and in serving vulnerable populations abroad, but we have some serious health care issues in our own backyard, and that’s what we’re hoping to address here.”

Training will include 24 months in pediatrics and 24 months in internal medicine and will be completed over the first four years of the program. Residents will switch departments every three months.

Residents will spend one month at the Baltimore City Health Department, learning about the scope of clinical services, observing and participating in programs and contributing to policy and program development.

In conjunction with the School of Nursing, residents will perform domestic violence/sexual assault evaluations of children and adults, analyze the impact of domestic violence in Baltimore City and provide medical care at the House of Ruth school.

The centerpiece of the outpatient experience will be work done at a new Johns Hopkins–run urban health clinic at the East Baltimore Medical Center, located in one of the most underserved and disadvantaged communities in the city.

After four years, the residents will be board-eligible in both pediatrics and internal medicine and be placed as an attending primary care physician in a Baltimore inner-city practice. The participants also can receive full tuition to support an advanced degree such as an MBA, MPH, master of education or master of behavioral health.

Four new residents will be added each year, for a maximum number of 24 at any given time.

Feldman said that the inaugural class is made up of four “exceptional and wonderful” people who displayed an enthusiasm and commitment to primary care in an urban setting.

“We recruited people who believe in our mission. These four certainly share our vision,” he said.

Feldman said that the recent passage of comprehensive health care legislation in the United States makes the program’s goal all the more vital.

“There is so much work that already needs to be done, and with the passage of the bill, there will be potentially millions more people who will need primary care physicians,” he said. “We have to figure out a way to deliver health care to urban populations in a more effective manner, and these residents will be at the heart of that.”