Students show how they’d like to study in Learning Commons 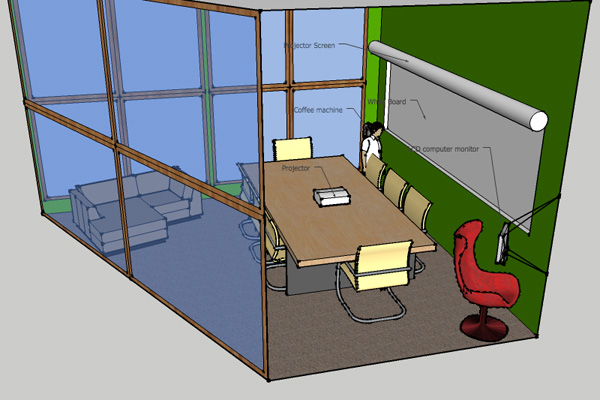 In her winning entry, Diane Hwang proposed a nontraditionally shaped room that offers both work and rest areas.

The Sheridan Libraries have announced the winners of the yrBLCspace design competition—an opportunity for students to provide their vision of an ideal group study room in the Homewood campus’s future Brody Learning Commons. The contest, sponsored by the Friends of the Libraries, was open to all students using any medium, from cocktail napkin to Google SketchUp. Entries were judged on creativity, sustainability, effectiveness and the flexibility of the space.

The four-story building, which is named to honor the university’s 13th president, William R. Brody, and his wife, Wendy, is being built for technology-driven, collaborative learning and will sit directly to the south of the Milton S. Eisenhower Library. Construction is to begin in June and is scheduled to be completed in July 2012.

“I’m really thrilled by the strength and variety of the submissions we received,” said Winston Tabb, Sheridan Dean of University Libraries and Museums. “This kind of contest is not only fun, but it gives us very useful insights into what students at Hopkins need and want to make their studying more effective.”

First prize, which includes $250 and a plaque marking the room inspired by the winning design, went to Diane Hwang, a sophomore neuroscience major in the Krieger School of Arts and Sciences. The judges said they admired Hwang’s decision to go with a nontraditional room shape, and liked the way she made efficient use of space with a kind of “compartmentalization” that offered both work and rest areas.

Second place and the $100 prize was awarded to Carolyn Rossinsky, also a sophomore in the Krieger School, who is double majoring in biology and neuroscience. Rossinsky’s design was chosen for her attention to detail and the care with which she selected the materials and features for the room, including movable furniture and several lighting options.

The third-place prize of $50 went to brothers Shijit and Rohit Dasgupta. Shijit is a freshman and Rohit a sophomore, majoring in mechanical and biomedical engineering, respectively, in the Whiting School of Engineering. The judges said they appreciated the design’s attentiveness to the increasing importance that presentations play in student assignments. The inclusion of a boardroom-style table and digital podium indicated the designers’ desire to provide students with an atmosphere that felt “professional.”

“Everyone recognizes that the Eisenhower Library is simply not big enough to meet our students’ needs,” Tabb said. “But we have also increasingly seen that it is not flexible enough to provide the array of study spaces our students deserve. While we look forward to seeing how Ms. Hwang’s design will inform at least one of the study rooms in the new building, I suspect that some element of each of the submissions—not just those that won—will be reflected in some way as we move forward with the design of study spaces on all levels of the Brody Learning Commons.”

To see the students’ winning designs, go to http://elibris.jhu.edu?p=2577.