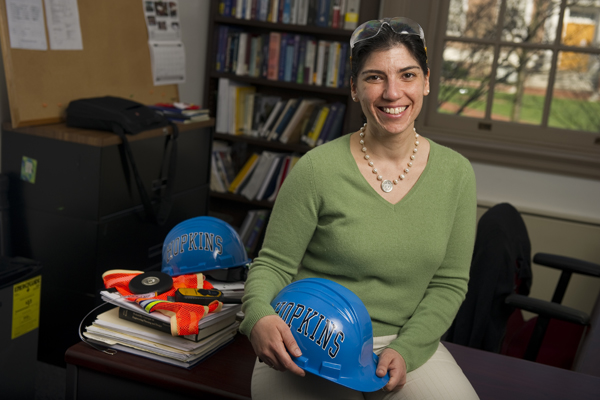 Judith Mitrani-Reiser with pieces of the ‘uniform’ she wore daily in Chile: safety goggles, a fluorescent safety vest and a bright blue Hopkins hard hat. Photo: Will Kirk/Homewoodphoto.jhu.edu

Judith Mitrani-Reiser, an assistant research professor of civil engineering in Johns Hopkins’ Whiting School of Engineering, recently spent a week in Chile looking at how well buildings and infrastructure had withstood the magnitude 8.8 earthquake that struck the nation on Feb. 27. Mitrani-Reiser studies safety and economic issues associated with structures, how structural risks can be communicated effectively to the public and how policy-makers and emergency-management leaders can make better-informed decisions regarding these risks. 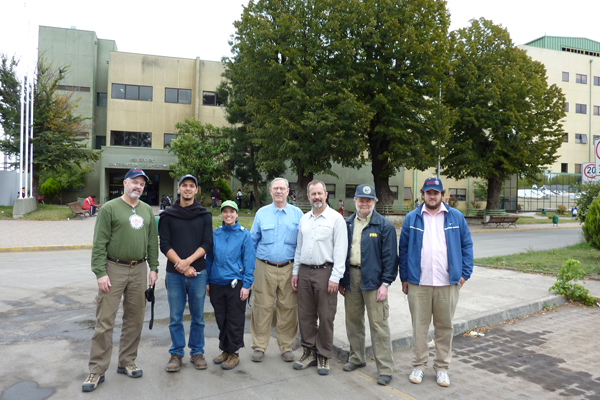 In Chile, she was part of a team assembled by the Earthquake Engineering Research Institute, based in Oakland, Calif. One of her fellow team members was Thomas Kirsch, co-director of the Center for Refugee and Disaster Response at the Johns Hopkins Bloomberg School of Public Health and director of operations in the School of Medicine’s Department of Emergency Medicine.

In an interview with The Gazette, Mitrani-Reiser spoke about her observations.

Q. What did you study during your week in Chile?

A. We focused on the health care system of Chile as part of the Earthquake Engineering Research Institute’s reconnaissance effort. Our hospital team was funded by EERI’s Learning from Earthquakes Program, the Johns Hopkins Office of Critical Event Preparedness and Response and FEMA.

Our aim was to assess the physical and medical performance of public hospitals in Chile after the earthquake, looking for vulnerabilities that can negatively affect patients and reduce the hospitals’ ability to offer regular services. An additional goal was to develop a survey tool to collect data on how the roles of various health care facilities changed as a result of the extent and type of damage that the buildings received.

Our team did a physical/medical assessment of 14 hospitals in the affected area between Santiago and Concepcion. We tested our survey tool on an entire system of hospitals in the Bio Bio region. We documented hospital damage and looked at how well the centers managed patients—transfers and discharges—and medical services in the days following the main shock.

Also, on our last day in Concepcion we learned that the University of Concepcion needed assistance. We were able to document some of the damage suffered by the university, including the complete loss of its Chemistry Department.

Q. Although this was a short visit, what did you conclude about how well Chile’s hospitals and health centers withstood the earthquake?

A. Structurally, we found that one-story hospital buildings and mid-rise hospital buildings built after 1985 performed well, with few exceptions. However, we found widespread nonstructural damage throughout the hospitals we visited. This included the collapse of infill masonry walls and severe cracking of wall partitions, fallen suspended ceilings and fixtures, extensive elevator failures and complete failure of communication systems, as well as widespread damage to mechanical, electrical and plumbing systems.

As opposed to the common practice in the United States, every hospital we visited in Chile had backup electrical and water systems in place, allowing these buildings to be self-sufficient for two to five days. This enabled the hospitals to continuously provide medical services and properly evacuate and/or move patients after the earthquake. It was particularly important, given the mass disruption in Chile’s communication networks.

Q. Did any types of construction appear to hold up better than others?

A. We found that base-isolated hospitals structurally performed well. A base-isolated structure is one whose superstructure is isolated from its foundation using rubber bearings or friction pendulum bearings to dissipate energy from an earthquake. As expected, older masonry buildings did not perform well.

Q. Were there any surprising findings?

A. We were surprised that there was no need to transfer patients from hospital to hospital in our study area, the Bio Bio region. Instead, the hospitals prepared for the expected post-earthquake patient surge by discharging 40 [percent] to 50 percent of stable patients to their families. The hospitals we surveyed performed surprisingly well in terms of protecting lives, as there were no deaths of patients or staff as a direct result of the earthquake.

Q. What were the benefits of being teamed with medical experts such as Dr. Kirsch?

A. It was a unique opportunity to be paired with a talented health care professional like Dr. Kirsch. He was able to advise our team on important questions to ask hospital administrators regarding medical functions and patient care. As a structural engineer who cares deeply about designing for continued building operability, I found it essential that our multidisciplinary team was able to offer many perspectives, leading to a greater understanding of how critical structures—in this case, hospitals—performed in a large seismic event.

Q. Could any of the things you saw in Chile help the people of Haiti and the nations assisting them so that the rebuilt Haiti will be able to better withstand a future earthquake?

A. After the widespread damage suffered in its 1960 earthquake, Chile has systematically improved its building codes and construction practice. As we learned in our study, the Chileans have paid special attention to the functionality of critical structures and have required their hospitals to have on-site reserves of power and water so that they can continue to function and treat patients. I think this is an important lesson for every country to take away from Chile, including in the rebuilding of Haiti.