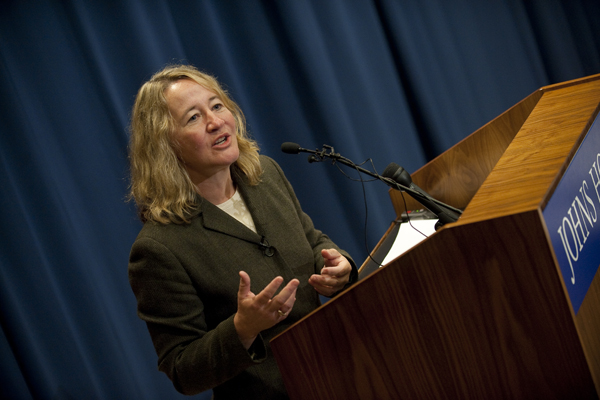 Carol Greider, who won the 2009 Nobel Prize in physiology or medicine, will visit the Homewood campus on April 12 to talk about her groundbreaking work. Photo: Will Kirk/Homewoodphoto.jhu.edu

Nobel Prize winner Carol Greider will give the inaugural talk in the Provost’s Lecture Series, which is intended to spread the wealth of academic excellence at Johns Hopkins among its campuses.

Greider, the Daniel Nathans Professor and director of Molecular Biology and Genetics in the Johns Hopkins Institute for Basic Biomedical Sciences in East Baltimore, will discuss her groundbreaking work at 4:30 p.m. on Monday, April 12, in 110 Hodson Hall on the Homewood campus.

One of the world’s pioneering researchers on the structure of chromosome ends known as telomeres, Greider was awarded the 2009 Nobel Prize in physiology or medicine by the Royal Swedish Academy of Sciences. The academy recognized her for the 1984 discovery of telomerase, an enzyme that maintains the length and integrity of chromosome ends and is critical for the health and survival of all living cells and organisms.

She became the 33rd person associated with Johns Hopkins University to win a Nobel Prize and the 20th at the School of Medicine to receive the honor.

Provost Lloyd B. Minor said that his chief aim for establishing the series is to bring outstanding faculty from one campus to another and make a “geographically distributed” university feel that much smaller.

“It’s quite remarkable how much excellence there is around the university, but we’re all over the place, ” Minor said. “We have people in Washington, D.C., throughout Baltimore and down in Laurel, [Md.,] at the Applied Physics Laboratory. It’s part of my job to get to all these places, but others don’t get that chance. I saw this as an opportunity to expose our wonderful faculty to the greater Johns Hopkins community.”

Minor said that he was thrilled that Greider had agreed to kick off this exciting new series, which is open to faculty, staff and students.

“Carol is a very skilled speaker, and I’m pleased to let others hear from such a brilliant Nobel laureate,” he said. “I think Carol and others in this series will not just talk about the work they’ve done but why they did what they did. I hope that people go away impressed with the creative process and the art of discovery, and have a better understanding of what makes these people tick. I know biology students at Homewood would love the opportunity to meet Carol and listen to her talk about the great work she’s done.”

Minor said that he anticipates the lectures taking place at least once per semester and rotating among campuses. For example, a physicist from Arts and Sciences could speak at the School of Medicine, and an expert on foreign affairs at SAIS could give a talk at the School of Public Health.

Details on the next lecture will be announced at a later date.

Greider’s talk, co-sponsored by the Department of Biology in the Krieger School, will be followed by a Q&A and reception.

Those who plan to attend are asked to RSVP to ProvostRSVP@jhu.edu.