School of Medicine’s 33rd annual celebration to be held Thursday 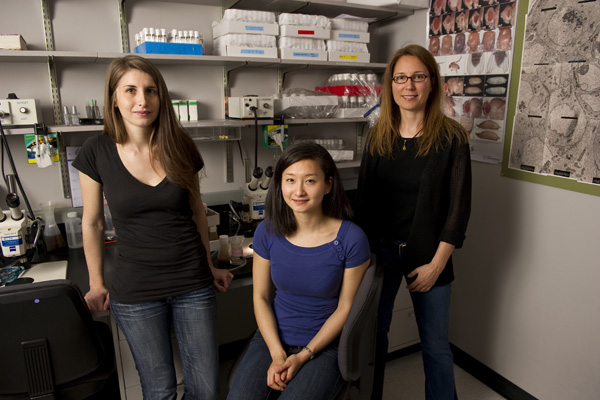 It’s that time of year again, when the Johns Hopkins University School of Medicine celebrates all the young investigators who help power its research enterprise. This year’s event honors 12 graduate students and six postdoctoral fellows. The program will be held at 4 p.m. on Thursday, April 15, in the Mountcastle Auditorium and will be followed by a poster presentation and reception in the Greenhouse Café.

“This year’s winners are an outstanding group of young scientists,” says Alex Kolodkin, an associate professor of neuroscience and co-chair of the award committee. “We had a lot of stellar applicants, and the decisions were incredibly difficult. While we single out these 18, Young Investigators’ Day really is a celebration of all of our trainees here at Hopkins.”

For recipients, the annual celebration—now in its 33rd year—can be a motivator.

“Young Investigators’ Day is a great thing to encourage graduate students and postdocs in their research,” says Wenqin Luo, a postdoctoral fellow in neuroscience and recipient of the A. McGehee Harvey Research Award. “Several of my friends won awards before me and always have been role models for me.” Luo, working in David Ginty’s lab, identified two previously elusive types of mechanosensory neurons, cells that mediate mechanical pain and touch sensation. 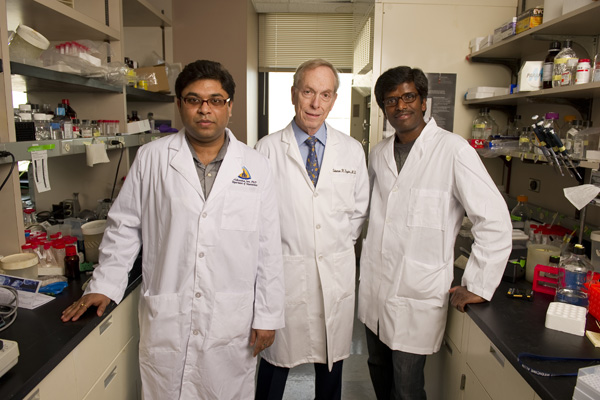 The Young Investigators’ Day awards are named for former Johns Hopkins students and well-respected former faculty members and are accompanied by a cash prize funded by friends, family and the Johns Hopkins Medical and Surgical Society.

For some recipients, the recognition has special meaning.

“Receiving an award named for one of the pre-eminent biological chemists brings me great satisfaction in knowing that the goal of trying to make an impact on both biochemistry and infectious diseases is feasible,” says Rahul M. Kohli, a postdoctoral fellow in Jim Stivers’ lab in pharmacology and molecular sciences and recipient of the Albert Lehninger Research Award. Kohli, who knows firsthand the challenge of becoming both a physician and a biochemist, discovered how a class of mutagenic enzymes targets specific DNA sequences to enable the immune system to generate diverse antibodies that go on to fight pathogens.

Xiaoyue Wang, a PhD candidate in biological chemistry and recipient of the Hans Joaquim Prochaska Award, has a connection to another prize: the Bae Gyo Jung Research Award. “For those who have left us before their time—including my classmate Bae Gyo Jung, who tragically passed away of cancer in 2006—these awards are a good way for us to remember and celebrate their lives.” Wang identified, while working in Craig Montell’s lab, a gene responsible for maintaining fly vision, a discovery that revealed a visual cycle previously known in humans but unrecognized in flies. Flies lacking the gene pdh develop conditions mimicking human retinal degeneration, establishing a system in which to study human vision defects and screen for therapeutics.

For many young investigators, the success of their research comes not only with years of hard work but from having the support of colleagues. Eva Andres-Mateos, a postdoctoral fellow in medicine and recipient of the Helen B. Taussig Research Award, says, “My success is a consequence of teamwork between all the lab members in Dr. Ronald Cohn’s lab.” Andres-Mateos used hibernating squirrels to study how to maintain muscle despite prolonged periods of starvation and stillness, and identified a new protein critical for muscle cell growth and survival during hibernation, a finding that may play an important role in discovering therapies for muscle-wasting diseases such as muscular dystrophy. 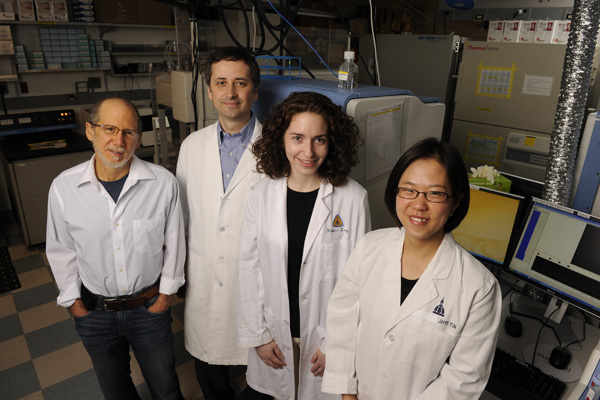 Clara Bien, a PhD candidate in the Biochemistry, Cellular and Molecular Biology Program and recipient of a Paul Ehrlich Research Award, also credits her colleagues. “I feel lucky to have done my graduate work here,” she says. “Peter Espenshade’s lab is an exciting and supportive place to work.” Bien characterized a protein that helps a disease-causing fungus infect and survive. She showed that blocking this protein’s function makes the fungus hypersensitive to drugs, suggesting that this protein may be a good target for drug design.

Bae Gyo Jung Research Award recipient Saurabh Paliwal, who completed his doctoral work in biomedical engineering in Andre Levchenko’s lab in December 2009, drew from the greater Johns Hopkins community to take a systems biology approach using microfluidic “lab on a chip” technology to discover new functions of the signaling protein MAPK in yeast mating-specific gene expression and gradient sensing. “My biomedical engineering training at Hopkins allowed me to work with, and to learn a wide range of skills from, collaborations in the Physics, Electrical Engineering and Biology departments, combining traditional biology to designing microfluidic tools and doing mathematical and computational modeling.”

Others relied on family support to get them through years of hard work. “I made the breakthrough that led to our solving the structure on a Saturday, Valentine’s Day, while my family was visiting from New York to help me move,” says Diana Mandelker, an MD/PhD candidate in human genetics and recipient of the Nupur Dinesh Thekdi Research Award. “The movers arrived at my old apartment at 8 a.m., and I went to lab to check on my protein crystals because I sensed we were close after working for three years. The crystals were beautiful, and the experiment was time-sensitive, so I called Sandra Gabelli, who came immediately to lab, and together we worked while my parents, brother and husband unpacked all the boxes in my new home without complaint.” Working in L. Mario Amzel’s lab, Mandelker and her colleagues solved the 3-D structure of the protein PI3Kalpha, one of the two most frequently mutated oncogenes in human cancers.

Srini Subramaniam, a postdoctoral fellow in neuroscience, discovered while working in Solomon Snyder’s lab a new and fundamental mechanism of adding a tiny SUMO protein to other proteins, uncovering a new culprit in Huntington’s disease. “We just came home from a monthlong vacation and I was checking my e-mail. As soon as we read the news of my receiving this award, my wife started jumping up and down and my 4-year-old daughter presented me an old trophy I once won in a singing competition. It was a happy day.”

As many can relate, discovery and success are not limited to the hours of 9 a.m. to 5 p.m. For Mette Strand Research Award recipient Jihye Yun, who completed the work for her doctorate in cellular and molecular medicine in Bert Vogelstein’s lab in December 2009, this was definitely true. “I cannot forget the moment, after years of work, when I discovered that GLUT1 is consistently up-regulated in cancer cells and probably helps them survive by bringing in glucose,” Yun says. “As soon as I saw the data, I shouted ‘great!’ over and over again. Fortunately, it was 2 a.m. on a Friday night, and there was nobody else in the lab; otherwise, they might have thought I was insane.”

Xuting Rebecca Sheng, a PhD candidate in the Biochemistry, Cellular and Molecular Biology Program working in Erika Matunis’ lab, had a similar experience. “One memorable moment was seeing an unexpected phenomenon for the first time and realizing that I am the only person who has ever observed it, even though it’s 9 p.m. and I’m still at work sitting in a dark room in the basement.” Sheng developed a new method to image living stem cells in the fruit fly testis. With this new tool she was able to discover two previously unknown processes that mediate stem cell regeneration, which contributes to our understanding of how tissue regenerates, a key to developing stem cell–based therapies in the future.

The spotlight on Young Investigators’ Day shines on more than the awardees; their advisers get some credit, too.

“The guidance I received from Mike Caterina is probably the single most important contributing factor to my project’s success,” says Tiffany Link, an MD/PhD candidate in cellular and molecular medicine and recipient of the Michael A. Shanoff Research Award. “He is such a great mentor. I learned so much, not just about the immediate experiment but generally about how to think about science.” Link discovered that immune cells lacking the TRPV2 protein are unable to ingest bacteria and other pathogens to stave off disease. And mice lacking TRPV2 are more susceptible to infection.

Melanie Issigonis, a PhD candidate in the Biochemistry, Cellular and Molecular Biology Program and recipient of a Paul Ehrlich Research Award, discovered how a niche can regulate two different stem cell populations in the fruit fly testis and how a single gene maintains the ratio of two stem cell pools. “By far, the largest contributing factors to my project’s success were the people around me—my mentor, Erika Matunis, and my wonderful lab mates. Erica is extremely supportive—she’s always there to cheer me on when experiments work and encourage me when they don’t.”

“I always believed that having a good working environment helps me work at my maximum intellectual and physical potential,” says Nilkantha Sen, a postdoctoral fellow in neuroscience and recipient of the W. Barry Wood Jr. Research Award. “And having a mentor like Sol Snyder makes doing experiments great fun. I’m lucky to have both—I believe these are the keys to my success.” Sen discovered a molecular signaling pathway that links free radical production and neuronal cell injury in many neurodegenerative disorders, including Parkinson’s, Huntington’s and Alzheimer’s diseases. This discovery may lead to the development of new therapies.

For Catherine Weisz, a PhD candidate in neuroscience and recipient of the Alicia Showalter Reynolds Research Award, “the tremendous teaching abilities of my two advisers contributed to these discoveries.” Weisz discovered that a small population of type II neurons in the auditory system can transmit electrical information to the brain and, when exposed to really loud sound that causes hearing damage, the brain may be alerted to this trauma via these same type II neurons.

Greg M. Delgoffe, a PhD candidate in immunology and recipient of a Paul Ehrlich Research Award, is another recipient who pays tribute to his adviser. “Jonathan Powell is a fantastic boss and really instrumental to my success,” he says. “Whether Friday afternoon brainstorming or final revisions to a paper, he’s really supportive and eager to see what’s next.” Delgoffe discovered a new link between nutrient sensing and an immune cell’s ability to mature fully to generate an immune response. “I am honored to receive this award and humbled by those who received it before me.”

“The success of my thesis work has been a direct product of the mentorship of my adviser, Victor Velculescu, and the other faculty members at the Ludwig Center for Cancer Genetics and Therapeutics,” says Rebecca J. Leary, a PhD candidate in cellular and molecular medicine and recipient of a Paul Ehrlich Research Award. “I am honored to be included among the ranks of Young Investigators’ Day prize recipients.” Leary developed a comprehensive landscape of genetic alterations that occur in breast, colorectal, brain and pancreatic cancers, and created a method that identifies chromosome rearrangements in tumors that can be used as “personalized” biomarkers.

Also being honored are Xin Ye, a PhD candidate in molecular biology and genetics and recipient of the Martin and Carol Macht Research Award, and Tracy Tran, a postdoctoral fellow in neuroscience and recipient of the Alfred Blalock Research Award. Ye, working in Jeremy Nathans’ lab, discovered that Norrin/Frizzled-4/Lrp signaling in endothelial cells controls a genetic program for retinal vascularization. Tran, working in Alex Kolodkin’s lab, discovered that secreted semaphorins regulate distinct aspects of neuron dendrite morphology and spine distribution in the postnatal central nervous system.

“We are really proud of this year’s award recipients,” says Shan Sockanathan, an associate professor of neuroscience and co-chair of the award committee. “It was inspiring for the committee to review all the successes here.”