Award recognizes extraordinary undergraduates who are committed to careers in public service. 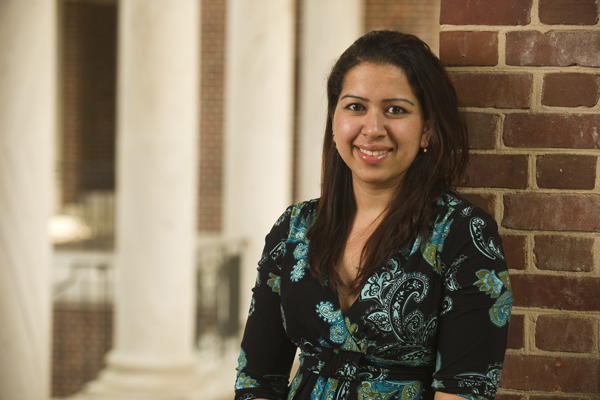 Neha Deshpande, who is earning her degree in three years, will take part in a yearlong Truman-Albright Fellows Program before attending medical school. Photo: Will Kirk/Homewoodphoto.jhu.edu

Neha Deshpande, a Johns Hopkins University student from Monmouth Junction, N.J., is one of 60 students from 54 U.S. colleges and universities to be named a 2010 Truman Scholar. The prestigious award is given each year by the Harry S. Truman Scholarship Foundation to extraordinary undergraduates in their third year of college who are committed to careers in public service.

Deshpande, 20, will earn her bachelor’s degree in biology with a minor in French cultural studies from the Krieger School of Arts and Sciences on May 27, after three years of undergraduate study. The Truman Scholarship will provide Deshpande up to $30,000 for graduate study and eligibility for priority admission and supplemental financial aid at premier graduate institutions.

The assistance from the Truman Foundation will help Deshpande pursue a medical degree specializing in obstetrics, gynecology, and maternal and fetal medicine. She plans to delay medical school for a year to take full advantage of the Truman Foundation’s offerings. This summer, she will be teaching biology for the Johns Hopkins Center for Talented Youth. Then she will join the Johns Hopkins Transplant Outcomes Research Group as a part of the yearlong Truman-Albright Fellows Program, which selects 24 scholars each year for entry-level positions in public service, research and educational organizations.

“It is the people you serve and take the time to understand who will ultimately define your leadership and expertise as a physician,” Deshpande said. “When I enter public service, I hope to address the racial and ethnic health disparities in our nation by focusing on the importance of preventive health care. Through this Truman-Albright Fellows Program, I hope to contribute to health disparities research in a more meaningful way before I begin my medical education.”

Since her freshman year on the Homewood campus, Deshpande has participated in a hands-on clinical neonatology practicum for 70 hours each semester at the Johns Hopkins Bayview Medical Center’s Neonatal Intensive Care Unit and Labor & Delivery Suite, where she “witnessed heartbreakingly high incidences of teen pregnancy, substance abuse and out-of-wedlock births.”

Through the university’s Woodrow Wilson Research Fellowship program, Deshpande designed a pilot study comparing the maternal and neonatal health of mother-infant pairs in Baltimore with 70 similar pairs in Pune, India. She spent her 2009 winter intersession at Pune’s King Edward Memorial Hospital, where she helped diagnose, treat and provide follow-up care to patients from the surrounding villages and slums. Deshpande found that the Indian babies had a lower mean gestational age and lower mean birth weight, and were more likely to be male because of the increasing number of abortions for female pregnancies. Interestingly, she said, the rates of preterm birth were the same in both newborn cohorts, and the Indian mothers were more likely to have pre-eclampsia during their pregnancies. Deshpande says she hopes to publish her results from this comparative study in The Journal of Perinatology.

“My clinical experiences have inspired me to pursue a career in public service that addresses the needs of minority and underprivileged populations with limited health care access,” Deshpande said. “I have learned that a successful health system lies on the shoulders of both physicians and policy-makers. Becoming a Truman Scholar will help me bridge this gap between medicine and politics and allow me to translate my experiences and knowledge of the health care sciences to achieve cost-effective strategies in health care and prevention.”

Deshpande describes a field trip in seventh grade to a neonatal intensive care unit as the experience that shaped her life’s mission “to work toward a day when all babies will be born healthy and to women who are prepared for the responsibilities of motherhood.”

Following the field trip, she began volunteering with her local March of Dimes office and has been working with the organization ever since. After being a volunteer for nine years, Deshpande was elected as the 2009–2010 National Youth Chair, and she currently represents more than 1 million youth volunteers across the country and designs national campaigns in health education, advocacy and fund raising. Deshpande also worked with March of Dimes Global Programs to found a Global Volunteer Youth Leadership Network on Maternal and Infant Health, and in October 2009, she traveled to New Delhi to speak about the power of youth in global public health at the fourth International Birth Defects and Disabilities Conference in the Developing World.

Having immigrated to the United States from Mumbai in India with her parents when she was 3 years old, Deshpande says she has a personal connection to her passion for community service.

“It was a life-altering risk that my parents had come to a country with only a few suitcases and not even enough money to afford a plane ticket back home,” Deshpande said. “I spent my childhood growing up in a scanty, one-bedroom apartment in a low-income, crime-stricken neighborhood in Queens, N.Y. The struggles of my family have given me humility, kindness, gratitude and, most importantly, compassion for other people.”

Outside her studies, Deshpande is the co-captain of JOSH, Homewood’s all-girl, nationally competitive nine-member fusion dance team. This year, JOSH launched the Greater Baltimore Dance Project, performing in Baltimore’s public schools and for special-needs programs at the Kennedy Krieger Institute and the Ronald McDonald House to promote dancing as a way to improve the mental, social and emotional health of children in the Baltimore community.

Deshpande is also president and founder of the Johns Hopkins Women’s Pre-Health Leadership Society, a society for female undergraduates who have demonstrated academic achievement, commitment to community service and a passion in pre-health studies. She is coordinating the first Women’s Pre-Health Leadership Conference at Johns Hopkins, which will take place in May and is anticipated to become an annual event.

Truman Scholars receive leadership training, career and graduate school counseling, and access to special internship opportunities within the federal government. Truman Scholars are chosen by judges looking for leadership potential, intellectual ability and the likelihood that a candidate will make a difference in the world. They must be U.S. citizens, have outstanding communication skills and be in the top quarter of their classes. The foundation was established by Congress in 1975 as the federal memorial to America’s 33rd president. This year’s winners will meet May 25 for a leadership development program at William Jewell College in Liberty, Mo., and receive their awards in a special ceremony at the Truman Library in Independence, Mo., on May 30.

Thirteen Johns Hopkins undergraduates—including six in the past six years—have earned the honor since the first in 1984. Many of the scholars have been coached by John Bader, associate dean for undergraduate academic affairs in the Krieger School and national scholarships adviser.

“Neha’s amazing resume might obscure what a fabulous person she is— warm, engaging and ridiculously modest,” Bader said. “She joins a remarkable group of recent winners, which says as much about her as it does about our university, which nurtures gifted public servants that the world needs so desperately.”