A personal, targeted gift for Peabody 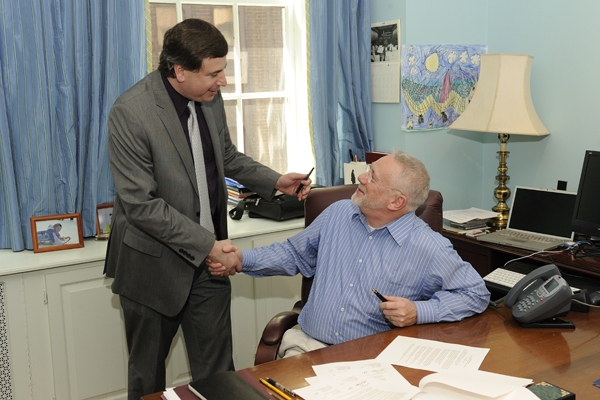 A former Peabody student has prepared a $2 million scholarship bequest to the Conservatory that aims to open musical doors for those impeded by intolerance.

Tristan Rhodes, who spent less than three years studying piano and conducting at the Peabody Institute during the late 1960s, said recently that although he did not face antagonistic repercussions from his family or at Peabody due to his sexual orientation, he witnessed a close friend ostracized by her family because of hers. He said that the woman was perhaps denied a promising literary career because of the lack of support to pursue her dreams.

Rhodes, who was recently in Baltimore to sign a formal agreement with the school, said that he doesn’t want individuals denied an opportunity at Peabody for such reasons.

The bequest, among the largest future commitments made to Peabody, will create the Tristan W. Rhodes Scholarship Fund for the benefit of qualified students who are gay, lesbian, bisexual or transgender and are not receiving tuition support from those who were originally providing or expected to provide it.

The decision as to which students are deemed qualified rests with the dean of the Conservatory.

Jeffrey Sharkey, director of the Peabody Institute, said that he is “absolutely delighted” about the generous bequest.

“This gift is all about lifting barriers,” Sharkey said. “One of the things that music does is to bring people of diverse cultures and backgrounds together, and unite them under this big tent of music.”

Sharkey said that such scholarship money, especially in uncertain economic times, can be hard to obtain.

“Raising such funds is something that we are working on constantly,” he said. “Musical training is expensive, and we’re in a very competitive market with our peer schools. This gift, certainly on a scale for Peabody, is extremely generous.”

Most scholarship gifts to Peabody are also targeted but traditionally go toward the study of a specific instrument. Rhodes’ gift is one of three future commitments of $2 million to Peabody, in addition to two in the $1 million range.

Andrea Trisciuzzi, associate dean for development at Peabody, said that Rhodes’ gift is significant both for its size and its source.

“It’s rare for us to get those very big gifts from our alumni, as most are not in a financial position that allows them to make million-dollar contributions. So for us to receive a bequest at this level from someone who went here is wonderful,” Trisciuzzi said.

The New York–born Rhodes, 62, entered Peabody in 1966 as a double major in piano and conducting. He left in 1969, before finishing his degree, after his brother was killed in Vietnam. He was later recruited to the Westminster Choir College in Princeton, N.J., where he was awarded a bachelor of music degree in piano and composition.

Rhodes, who now lives in Victoria, British Columbia, has been involved with music for 40 years as a pianist, organist and choral conductor.

Rhodes was artist in residence and a faculty member at the American Boychoir School in Princeton before taking the post of conductor of Washington, D.C.’s Offertorium Musicum Choir. He created the opera workshop at St. Mary’s College of Maryland while serving as assistant to the college president and as a member of the piano faculty.

He rose to fame as a conductor, pianist and composer during his many years as director of the National Boychoir of America in Washington.

An ardent chamber music player, he was one of the founding members of the Northampton Trio.

He was also conductor and artistic director of the New England Vocal Ensemble in Boston, which he conducted until retiring from the concert stage, and he has been the director of music at two prominent Episcopal parishes in the United States. More recently, he has kept a busy schedule as teacher, guest conductor and clinician at music festivals. He has also been a real estate investor.

Despite advances in gay rights over the years, Rhodes said that he expects his Peabody bequest to maintain its relevance when it goes into effect after his death.