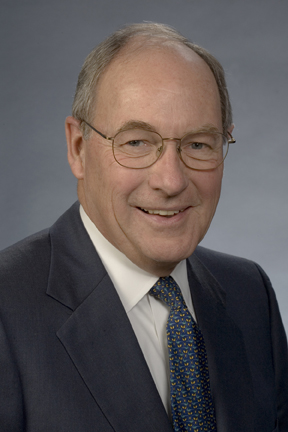 Nicholas J. Fortuin, one of Johns Hopkins Medicine’s most dedicated and admired clinical cardiologists, teachers and institutional leaders, died unexpectedly on April 11 near Owings Mills, Md., while biking, his favorite sport and pastime. The cause of death was not known, but it is likely he suffered a heart attack, colleagues say. He was 69.

Fortuin also served for two years as president of the board of trustees of the Johns Hopkins School of Nursing.

Patients, colleagues, friends and family recalled that he was caring for patients on the Friday before he died. His first meeting with colleagues was at 7:30 a.m., medical grand rounds followed at 8 a.m., then teaching and reading diagnostic images with fellows at 9 a.m. From 10:30 a.m. on he was with his patients, including two who had had cardiac catheterization procedures performed at The Johns Hopkins Hospital; he saw another nine later at Johns Hopkins at Green Spring Station.

A professor at the School of Medicine and its Heart and Vascular Institute, Fortuin was a pioneer in echocardiography, using ultrasound technology to assess the heart’s structure and pumping ability and translate the images into sophisticated diagnostics and treatment guidelines.

“I recruited Dr. Fortuin and was very proud to have done that,” said Richard S. Ross, cardiologist and dean emeritus of the Johns Hopkins School of Medicine. “He persuaded me back in the 1970s that echocardiography was the wave of the future, and, in fact, he was a pioneer in what is now a standard, and indispensable, part of cardiac care. Most of all, he was a strong clinical cardiologist, a forceful voice in his field and one who solved innumerable, seemingly insoluble problems. Doctors would follow a patient for years and miss a diagnosis, and Nick would see that patient and figure it out immediately.”

Fortuin was recruited to Johns Hopkins to become inaugural director of its echocardiography lab, in 1971, returning here from a stint in the public health service of North Carolina. It had also been under the tutelage of Richard Ross that Fortuin, immediately after graduating from Cornell Medical College in 1965, had joined the ranks of Johns Hopkins medical staff to further pursue his clinical training in medicine and cardiology.

It became Fortuin’s newfound mission to establish echocardiography as a permanent part of the university’s research, training and clinical enterprises. He opened the laboratory and began a weekly echocardiography conference, during which he and other faculty would review intriguing case studies and interpret or read patients’ echocardiograms with cardiology fellows, a practice that continues to this day. Thousands of patients and several hundred cardiologists have benefited from his skill, training and mentorship, Fortuin’s colleagues say. He went on to serve on several editorial boards for cardiology journals.

“The Department of Medicine, the Division of Cardiology and Johns Hopkins Medicine have lost one of their most committed teachers, physicians and academic leaders,” said cardiologist Myron Weisfeldt, the William Osler Professor of Medicine and director of the Department of Medicine at Johns Hopkins. “There are generations of cardiology fellows whose echocardiography skills are entirely the product of Fortuin’s instruction, mentoring and cajoling.

“It was one of the singular pleasures of my career to have written the letter successfully nominating Dr. Fortuin for promotion to professor,” Weisfeldt noted. “But his patients, too, knew his worth. They provided him with one of the most prestigious honors possible: a chair endowed in his name, to be occupied by an equally skilled and committed physician and teacher.”

In 2008, some 300 patients, colleagues, and health and medical organizations honored Fortuin’s clinical skills by establishing the named professorship, which is held by cardiac electrophysiologist Hugh Calkins, who founded a patient registry in 1998 for those with inherited heart rhythm disorders and is also director of its arrhythmia programs.

“I am terribly saddened by the tragic and untimely death of Nick Fortuin,” said Calkins, the Nicholas J. Fortuin Professor of Medicine at Johns Hopkins.

“Nick was my mentor and friend, an outstanding clinical cardiologist, and he represented the very best of Hopkins Medicine,” Calkins said. “He taught me many things, but most of all that the patient always comes first. Most striking to me about his remarkable career was how generous he was with his time, both for patients and colleagues. I am deeply honored to have been the inaugural recipient of the professorship that bears his name. Our community has lost a wonderful doctor and colleague.”