Social vs. dependent drinking: Is the difference in the brain? 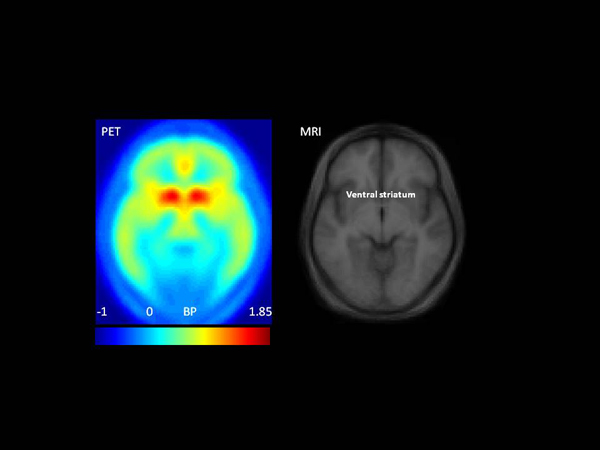 Why some people can enjoy a glass of wine with dinner or a few beers at a ballgame with no ill effects and others escalate their drinking and become dependent remains one of medicine’s baffling mysteries and a major public health concern.

Using a $1 million stimulus-funded grant from the National Institutes of Health, a team headed by Elise Weerts, associate professor of behavioral biology in the Johns Hopkins School of Medicine, is using brain imaging techniques to explore whether individual differences in the brain’s opiate receptor system could contribute to a person’s future risk of developing problems with alcohol.

“We wanted to test the possibility that differences in brain chemistry can influence alcoholism risk,” Weerts said. “We know that some individuals are less sensitive to the effects of alcohol than are others, and this may increase how often and how much they drink. Our study will help to determine if these differences might originate in the brain’s opiate receptor system.”

The human brain contains natural chemicals called “opioid peptides,” some of which are similar to morphine, a narcotic painkiller. These opioid peptides bind, or stick to, special sites in the brain called “receptors,” resulting in either pleasurable or aversive feelings. The sensations that a person gets when drinking alcohol, for instance, are thought to be regulated or controlled, in part, by the brain’s release of these opioid peptides, Weerts said.

The team’s previous research has indicated that opioid receptor binding is increased in people who are dependent on alcohol, when compared to social drinkers, but “what we don’t know is whether these differences were there before alcohol dependence or were a result of heavy long-term drinking,” Weerts said.

Over the course of the upcoming two-year study, about 60 healthy men and women, ages 21 to 30, who report that they regularly drink alcohol socially will be tested. Each participant will undergo a thorough psychological screening, which includes talking about his or her own drinking history and habits. The subjects will then undergo brain scans, which utilize small amounts of a radioactive drug that binds to opioid receptors and allows them to be imaged and seen. These PET (positron emission tomography) scans will help the research team construct a three-dimensional image of the person’s brain in order to visualize the opioid receptors located in different regions that are thought to be involved in the effects of alcohol.

In addition, study subjects will be given small amounts of alcohol under controlled conditions and asked to complete questionnaires about how they feel. The answers will be correlated with each subject’s drinking history and PET scan results.

“This research is important, as only a subset of people who drink alcohol go on to develop abuse and dependence disorders,” Weerts said. “We don’t have a good understanding of all the factors that can either increase a person’s risk or, alternatively, reduce his risk of future alcohol problems. This should help.”

The stimulus grant allowed Weerts, who is a team member of the School of Medicine’s Integrated Program of Substance Abuse Research, known as IPSAR, to hire two new staffers—a research assistant and an interviewer/screener—and retain another research assistant, a data manager and a nurse practitioner to work on the study, and will contribute to the costs of staff in the Department of Radiology.

This project is among the 380 stimulus-funded research grants and supplements totaling $192 million that Johns Hopkins has garnered since Congress passed the American Recovery and Reinvestment Act of 2009 (informally known by the acronym ARRA). ARRA bestowed the National Institutes of Health and the National Science Foundation with $12.4 billion in extra money to underwrite research grants by September 2010. The stimulus package—which provided $550 billion in new spending, including the above grant—is part of the federal government’s attempt to bring back a stumbling economy by distributing dollars for transportation projects, infrastructure building, the development of new energy sources and job creation, and financing research that will benefit humankind.