A hard-hat summer for Homewood

A summer of progress, capital project–style, lies ahead for the Homewood campus and nearby university facilities. 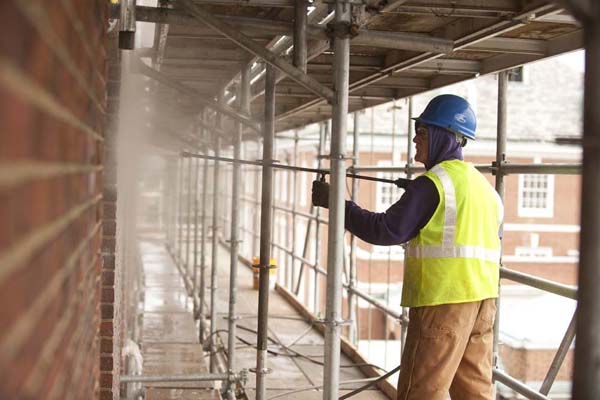 A summer of progress, capital project–style, lies ahead for the Homewood campus and nearby university facilities.

When the academic term ends, hard hats, trailers and temporary fences will become familiar sights as literally dozens of construction projects, building renovations, upgrades and retrofits are on tap.

Some will begin; others will wind down.

Notably, the extensive three-year $73 million renovation to Gilman Hall will reach its conclusion, as the historic, 95-year-old building is set to welcome back faculty and staff in July. The flagship space for the Krieger School of Arts and Sciences’ humanities departments now features an extensively reconfigured interior, modernized lighting and mechanical systems, and a dramatic new three-story glass-topped central atrium.

Work also ends on the Gilman Tunnel, which will feature new ADA-accessible entries.

The construction on the cogeneration power plant, which began last fall, will be finished in June. The plant will run on natural gas and supply a significant portion of the campus’s energy needs. “Cogeneration” refers to the utilization of both power and heat. The new plant is an addition to the existing campus Power Plant, located at the southern end of Whitehead Hall.

The renovation of the Johns Hopkins University Press Building, located at 2715 N. Charles St., will also wrap up in June. The project includes the renovation and reconfiguration of interior space on the building’s first four floors, with full mechanical equipment and electrical systems upgrades. In addition, the lot on the north side of the building was excavated for a new courtyard to bring natural light and outdoor access to lower-level conference rooms.

As some of these projects end, new ones will begin.

In early June, construction commences on the Brody Learning Commons, named to honor the university’s 13th president, William R. Brody, and his wife, Wendy. The six-story addition will sit directly to the south of the Milton S. Eisenhower Library and is being built for technology-driven, collaborative learning. The facility, scheduled to open in July 2012, will feature ample natural light; smart technology throughout; group study, quiet reading and seminar rooms; exhibit space for art; and a cafe.

Jody Latimer, director of Design and Construction for the Homewood Office of Facilities Management, said that the portion of campus around the Brody Learning Commons will be a hot spot of construction activity. The area between the Merrick Barn and the Milton S. Eisenhower Library will be fenced in and inaccessible for the next two years, she said.

Access to the Krieger Hall and Maryland Hall loading docks will be maintained but limited, Latimer said. Access to the MSEL dock will be closed for the duration of the project.

“There’s a lot going on this summer with this portion of campus being extremely busy,” Latimer said. “Expect to see trucks, trailers and construction crews moving around. We will be directing pedestrian traffic away from that area.”

Latimer said that the construction will get noisy at times, and Design and Construction plans to host informational meetings with faculty and staff in neighboring buildings to acquaint them with the construction schedule and timelines in order to minimize disruptions.

Also in June, work begins on renovations to the Whiting School’s New Engineering Building and Maryland Hall, both related to a new research center dedicated to the study of the physics of cancer. Researchers from the Johns Hopkins Institute for NanoBioTechnology were awarded a $14.8 million grant from the National Cancer Institute to launch the research center, aimed at unraveling the physical underpinnings that drive the growth and spread of cancer.

The New Engineering Building will feature new lab and office space dedicated to this effort. To accommodate displaced NEB tenants, new offices and labs will be created in Maryland Hall, and some school administration, including the Dean’s Office, will move to the Wyman Park Building.

“It’s like dominoes,” Latimer said. “The new center creates the need for the reconfiguration of these spaces.”

Elsewhere, the Whitehead Hall and Mergenthaler Hall elevators will be shut down from May 17 to Sept. 1 to undergo modernization.

The main entrance to Shriver Hall will be reconstructed with new ADA-compliant ramps. Construction will begin on June 1 and be completed by Sept. 30. Access to the building for events will be maintained through all other entrances.

The Shaffer Hall lobby will be renovated in two stages beginning May 17 to 28, with work restarted on Aug. 2. The project, which is scheduled to be finished by Aug. 29, will include abatement and new paint, as well as the replacement of the floors, ceilings and front doors. Access to the Academic Affairs Office will be maintained through the New Engineering Building.

In Jenkins Hall, new labs will be created on the building’s second and fourth floors.

The Bloomberg Hall computer server room, located in the building’s basement, is being enlarged. The existing equipment within the space will be temporarily relocated during construction, scheduled for May 1 through mid-August.

Public restrooms in the Athletic Center and Krieger, Maryland, Shaffer, Levering, Shriver and Ames halls will be upgraded with reconfigured stalls, new water-conserving plumbing fixtures, energy-efficient lighting and new finishes. The spaces will be reconfigured as necessary to provide full ADA accessibility. Construction, slated for June 1 to Aug. 15, will be scheduled so that facilities are maintained within each building at all times.

Smaller upgrades will be taking place on the campus as well.

“There’s certainly a long list of projects this summer,” Latimer said. “There’s typically a good deal of construction work going on here after classes end, but this will be a particularly busy couple of months.”

Latimer said that Design and Construction is working with the various contractors to minimize disruptions to campus traffic and parking. Much of the noisiest work will be conducted from 7 to 9 a.m. and on the weekends.