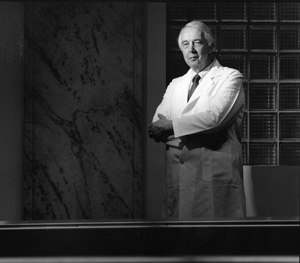 Grover M. Hutchins, a world-renowned pathologist who practiced at Johns Hopkins Medicine for more than 50 years, died April 28 while traveling in Africa, from head injuries sustained from a fall. Hutchins, 77, and his wife, Loretta, both of Baltimore, were on a cruise around the world.

Known for his dedication and strong work ethic, colleagues say, Hutchins had served as the director of Autopsy Services at The Johns Hopkins Hospital from 1976 to 1998 and was active on the staff at the time of his death.

“Grover Hutchins served as a mentor, teacher, colleague and friend to hundreds and hundreds of medical residents, students and faculty from the time he began his medical training here in 1957. He will be sorely missed in the halls of Hopkins,” said Edward D. Miller, dean of the School of Medicine and CEO of Johns Hopkins Medicine. “He did not just focus his research in his selected subspecialties of cardiac and pediatric pathology but also published more than 500 papers covering practically every topic in his field.”

“Grover Hutchins was truly amazing and of a great help to me on any scientific or administrative problem,” said Barbara Crain, who succeeded Hutchins as director of Autopsy Services. “Whenever fellow pathologists found something unusual, they could always go to his office for help. He would often pull out a paper that he had written on exactly that issue,” said Crain, an associate professor at Johns Hopkins.

Hutchins served on the editorial boards or as a reviewer for more than two dozen of the most prominent peer-reviewed journals in medicine and pathology.

Last year, the College of American Pathologists paid tribute to Hutchins, naming him among their Lifetime Achievement Award winners. He also received numerous teaching awards at the Johns Hopkins University School of Medicine, where he was a professor in the departments of Pathology and in Art as Applied to Medicine.

Hutchins received most of his undergraduate education at Johns Hopkins, starting in engineering here in 1949 and earning his bachelor’s degree in 1957; from 1952 to 1954, he was attached to the medical corps of the U.S. Army.

Filed under Obituaries, School of Medicine