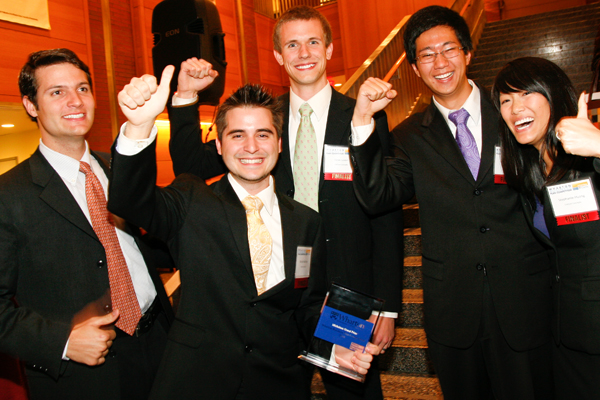 A Johns Hopkins student team that developed a system to make spinal surgery more successful in patients with osteoporosis has won the $20,000 Michelson Grand Prize in the 2010 Wharton Business Plan Competition at the University of Pennsylvania. Since it was launched in 1998, this major competition has drawn more than 150 student teams annually. This year, 231 teams entered.

The winning team, called Cortical Concepts, has filed a provisional patent not only for its device but for its method of applying an anchor—similar to a drywall anchor used in home building—to bone screws used in spinal surgery. Osteoporotic patients have softer or more brittle bones, which can allow spinal surgical screws to pull out, leading to a risky revision operation. The Cortical Concepts system is designed to strengthen this procedure and reduce the likelihood that a screw will pull out.

In developing and refining the system, the students worked with a clinical sponsor, A. Jay Khanna, an associate professor of orthopedic surgery in the Johns Hopkins School of Medicine. The team has estimated that the system could be priced at about $400.

In the Wharton competition, a fifth member of the team was Stephanie Huang, of Hockessin, Del., a University of Pennsylvania Medical School student who earned a bachelor’s degree in biomedical engineering at Johns Hopkins last year. While at Johns Hopkins, she worked on an earlier concept for the spinal surgery system with one of the current Cortical Concepts team members.

Youseph Yazdi, a Johns Hopkins assistant professor of biomedical engineering and director of the Center for Bioengineering Innovation and Design, said that the Cortical Concepts team members are currently talking to potential investors. The students, working with the Johns Hopkins Technology Transfer staff, are seeking to raise $350,000 in startup funds for additional development and testing to bring their product closer to the marketplace.