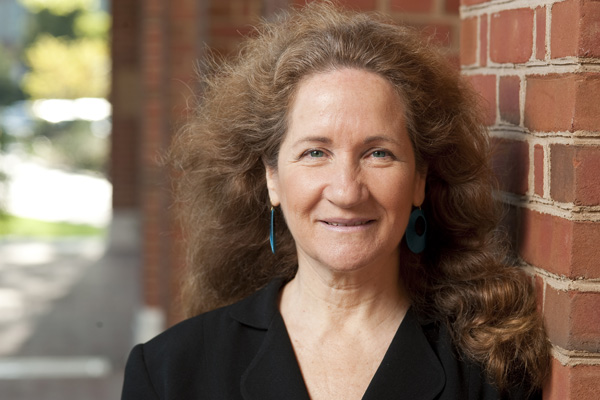 Katherine Newman is currently a professor at Princeton and director of its Institute for International and Regional Studies. She previously served on the faculties of Harvard, Columbia and the University of California, Berkeley. Photo: Will Kirk/Homewoodphoto.jhu.edu

Katherine Newman has had so many connections to Johns Hopkins for so long that actually taking a job here might seem almost anticlimactic. Anticlimactic, that is, if she wasn’t so excited about that job.

“Good morning, colleagues,” the newly elected James B. Knapp Dean of the Krieger School of Arts and Sciences said at her formal introduction to the university community last week. “I couldn’t be more thrilled to be here.”

Newman’s connections to Johns Hopkins and the Krieger School started forming during her years as a graduate student in anthropology, when she learned about the school’s “unparalleled strength” in Atlantic history. Professor Emeritus Sidney Mintz, she says, “has always been one of my academic heroes.”

Later, as her career shifted toward sociology, she began working with Johns Hopkins experts in demography, inner city poverty and the sociology of education. Andrew Cherlin, a Krieger School sociologist and the university’s Griswold Professor of Public Policy, says that Newman has long been a colleague and friend. “She’s a very high-energy person,” said Cherlin, who added that he and his faculty colleagues are “thrilled” with Newman’s appointment. “She’ll be great,” he said. “She’ll shake things up, in a good way.”

But the connections don’t end there.

As director since 2007 of Princeton’s universitywide Institute for International and Regional Studies, Newman says, she has come into frequent contact with Johns Hopkins scholars in political science, comparative literature and area studies. Working with scientists at Princeton has made her aware of the Krieger School’s strengths in fields like physics, astronomy, neuroscience and psychology.

“The more academic domains I have a chance to work on, the more I find at Hopkins,” Newman said. “And I’m looking forward to learning about all the dimensions of scholarship on the Homewood campus that are unfamiliar to me.”

Newman—a widely published expert on poverty, the working poor and other issues—will join Johns Hopkins Sept. 1 after cramming what had been planned as a yearlong sabbatical into a summer of intense work completing her next book. On top of that, she plans over the next few months to devote a day a week to getting up to speed on Johns Hopkins and the Krieger School. “It will get done,” she said, “because I am determined that it will.”

President Ronald J. Daniels, who, along with Provost Lloyd Minor, recommended Newman’s appointment to the board of trustees, called Newman a “distinguished scholar, veteran academic leader and talented and enthusiastic educator.” She is now the Malcolm Stevenson Forbes ’41 Professor in the Woodrow Wilson School of Public and International Affairs and the Department of Sociology at Princeton, where she has taught since 2004. In addition to directing her institute, she founded and chairs its joint doctoral program in social policy, sociology, and politics and psychology.

Previously, during eight years at Harvard University, she was the first dean of social science at the Radcliffe Institute for Advanced Study. While there, she designed a universitywide research program in the social sciences, promoting collaboration among faculty from the arts and sciences, public health, medicine, law and education. She also has served on the faculties of Columbia University and the University of California, Berkeley.

“I hope,” Newman said, “that my first five years will see a lot of attention focused on the quality of undergraduate life and education at Johns Hopkins, improvements in the financial packages we can provide for our distinguished graduate students, productive interactions with the other schools that make the university such a rich environment for interdisciplinary learning and responsible growth in the size of the faculty to increase ‘critical mass’ in fields that are important to all of us.

“I’d like to contribute to a strong and vibrant internal culture that lives up to the highest standards of academic achievement,” she said. “That may sound like a platitude, but it isn’t. It’s hard work and requires the engagement of all parts of the community, from the first-year undergrads who will arrive in August to the emeritus faculty whose wisdom we need to draw upon.”

Newman, who has written or co-authored nine books and has another in press in addition to the one she is writing, has focused much of her scholarly work on the lives of the working poor and mobility up and down the economic ladder. She also has investigated the impact of tax policy on the poor, the history of public opinion’s impact on poverty policy, school violence and the impact of globalization on young people in Italy, Spain, Japan and South Africa, among other issues.

“I know that there are many challenges ahead for all of us in higher education, and I’m not daunted by any of them,” Newman said at her introductory meeting. “I think you will find me a high-energy partner, someone who looks forward to meeting every last one of you. I figure with the 275 faculty members in Arts and Sciences, it should take me about a year of lunches.”

To see Newman’s first introduction to the Johns Hopkins community, go to the archived webcast at https://gazette.jhu.edu/newman.