Time out with: Beth Stewart, research coordinator, soprano and entrepreneur 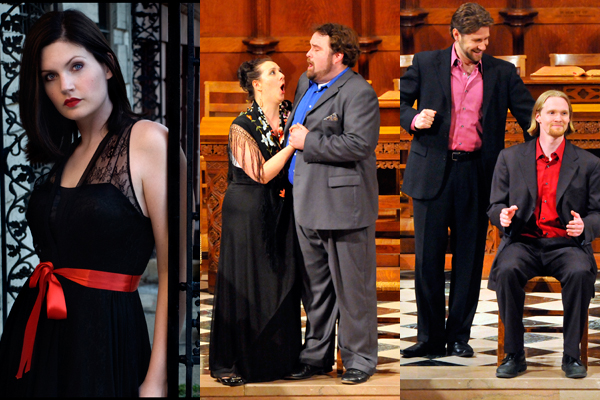 When the Baltimore Opera Co. dissolved last year, some might have wondered when Charm City would next hear an aria from Carmen, Madame Butterfly, La bohème or another such classic.

Turns out, the answer was very soon, thanks to one enterprising Johns Hopkins employee.

Beth Stewart, a research coordinator for the School of Medicine’s Pediatric Pulmonary Registry, viewed the demise of the Baltimore Opera as not just a cultural loss for the community but another blow to aspiring young artists like herself, and to fellow Peabody alumni.

“We found ourselves vocally coming of age at a time when a lot of local companies like Baltimore Opera and the Master Chorale of Washington have sort of spectacularly folded. That left a lot of people our age without opportunities,” said Stewart, who earned both a bachelor of music degree in voice and a master’s in voice performance from Peabody. “And it meant that opportunities that previously existed were even harder to compete for.”

Stewart said she once read that there were 500 qualified sopranos for every available slot.

“And that was before everything started folding,” said Stewart, a soprano herself, who also received a bachelor’s degree in Latin American studies from the Krieger School of Arts and Sciences. “It’s happening everywhere, not just the Baltimore area.”

In response, Stewart founded the Chesapeake Concert Opera, a Baltimore company devoted to providing talented young artists an opportunity to sing leading roles and begin their professional careers. The company also seeks to offer budget-friendly performances to encourage novice opera-goers and build audiences throughout the region.

Stewart enlisted friend Douglas Peters, a fellow Peabody alum, who in addition to starring in some of the performances serves as the company’s program director.

Stewart said they didn’t have to look far for additional assistance.

“We knew so many talented people who were not going to get opportunities,” she said. “We decided that rather than wait for the economy and situation to fix themselves, we would create our own opportunities.”

The 2009 recipient of the Gulen F. Tangoren, M.D., Award for Vocal Excellence in Opera, Stewart has already had a varied professional career. She recently performed with the Bethesda Summer Music Festival as Lucia in Lucia di Lammermoor, the Peabody Opera Theatre as Violetta in La traviata and Giulietta in The Tales of Hoffmann and the Maryland Opera Society as the title character in The Merry Widow.

Initially, Stewart and her friends planned to put on some of opera’s “greatest hits” by themselves, but the concept quickly spiraled into something bigger. The company hosted more than 160 auditions last year, with singers coming from as far away as Texas and Illinois. Roughly 30 singers, most of them in their 20s and early 30s, were chosen. Nearly half the current company are alumni of Peabody, current students at the school or university staff.

The company adopted the motto “Singers you won’t be able to afford in 10 years.”

Not your conventional opera, the Chesapeake Concert Opera presents monthly, semistaged, slightly pared-back versions of signature productions, sans costumes, lavish sets and an orchestra. The singers come on stage in suits and evening gowns. Ticket prices are $15 in advance, $20 at the door and $10 for seniors and students.

The performances, which feature piano accompaniment, are held in Memorial Episcopal Church in Bolton Hill. Peters calls it naked opera on a shoestring budget, but with prime-time talent. The cost, a tiny fraction of traditional opera.

“The money that goes into grand opera is astronomical,” said Peters, a former member of the Baltimore Opera chorus. Costs, he said, reached such a level that many companies across the country simply could not sustain themselves.

Said Stewart, “It’s the costumes, the sets, the lighting, performers from all over the world; even singers with small parts would make a few thousand dollars a show.”

Instead of libretto translation supertitles used in opera houses, the Chesapeake Concert Opera employs narration, often cheeky, to set the scenes. Stewart, who frequently serves as narrator, also throws some historical tidbits into the short asides, such as cultural traditions during the composer’s time period.

“We thought for people who are new to the opera, this was an easy way for them to connect to the story and sit back and enjoy. We are trying to make opera seem not so distant and unapproachable,” Stewart said. “I will say that, as far as a spectator sport, there is nothing cooler than grand opera; the visual and aural extravaganza is amazing. But what we’ve learned is that it’s not the only way to experience opera.”

The company kicked off its inaugural season in January with a production of Mozart’s Cosi fan tutte. It has since done an opera a month, including  L’eliser d’amore, La traviata and, most recently, La bohème.

In May, the company will present Rossini’s comic hit Il barbiere di Siviglia (The Barber of Seville). Peabody alumna Rebecca Gordon will play the starring role of Rosina, and current Peabody student Nicholas Fichter will play Almaviva. The opera will be conducted by Simeone Tartaglione, a staff member in the Peabody Opera Department, and accompanied by John Wilson, a Peabody student.

Stewart said that they have received great feedback from both opera veterans and newbies. The audiences, typically 100 per night, are invited to stay after the performance and mingle with the singers.

Baltimore Sun music critic Tim Smith recently wrote that the Chesapeake Concert Opera was full of promising singers eager to jump into an opera and take the audience along with them.

In his review of La bohème, he wrote: “I was impressed with the general quality and commitment of the singing. Christine Kavanagh was an effective Mimi, her voice sure of pitch, rich of tone and sensitive of phrase.” He added that William Davenport, who sang the role of Rodolfo, has the makings of a significant tenor. “There’s an immediately expressive and appealing quality in the timbre, one with quite an Italianate tint. In a couple places, he produced a sound reminiscent of a young Pavarotti,” Smith said.

Kavanagh, a Peabody alum with a master of music degree in voice and a graduate performance diploma in opera, previously had an extensive, skyrocketing professional career, which was cut short by an illness. She returned to Baltimore for full-time employment and to restart her career. Her Peabody connections led her to Stewart’s fledgling company.

“This has provided me a comeback to my musical career,” said Kavanagh, who currently works in the Johns Hopkins Office of Government, Community and Public Affairs as the community coordinator for East Baltimore. “I was immediately impressed by the artists in the group and the level of professionalism in this company.”

Stanley Cornett, a professor of voice at Peabody and former teacher of Stewart’s, said that he’s been impressed by the innovative company his student has created.

“I’m certainly intrigued by the grass roots part of what she’s doing,” he said. “The company is giving a lot of opportunities to Peabody singers and filling a vital space in the opera scene in Baltimore. For the singers, this is helping them grow and could be a very important stepping stone for them in their careers.”

Cornett said that the semistaged productions instill a new vitality to familiar productions.

“I noticed a lot more dramatic impetus to the performance,” he said. “I found that the narration makes it more accessible. It invites the audience to come into what’s happening.”

Stewart said it’s opera you can wear jeans to.

For more information and a full schedule