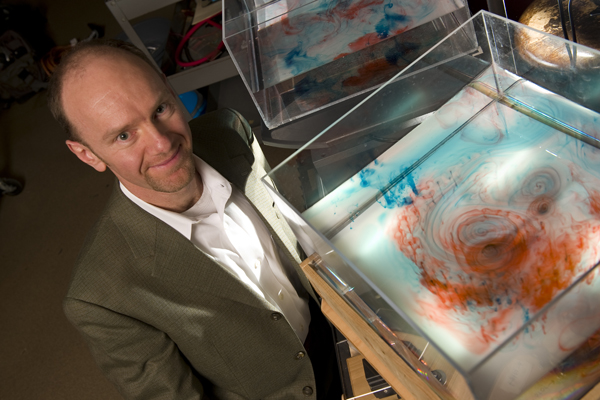 Thomas Haine with the apparatus he uses to demonstrate ocean circulation to his classes. The water tank shows eddies (swirls of food coloring) that are strongly affected by the spin of the tank. The eddies are analogous to the turbulent ocean eddies that the team will study in PAVE, the Peta-scale Arctic-Atlantic-Antarctic Virtual Experiment. In ocean eddies, the Earth’s spin is a dominant effect. Photo: Will Kirk/Homewoodphoto.jhu.edu

Using a $736,000 grant administered through the federal stimulus act, a Johns Hopkins earth scientist is working with researchers at the Massachusetts Institute of Technology to develop what promises to be the biggest, most cutting-edge and detailed computer model of ocean currents ever made.

The supercomputer model, which will be run by a National Science Foundation–built supercomputer capable of doing a million billion calculations per second, will simulate currents in the Arctic, Antarctic and Atlantic oceans in hopes of shedding light on how small-scale turbulent eddies affect large currents, such as the powerful Gulf Stream.

This five-year study is important research because the ocean circulation plays a critical role in the Earth’s climate, according to principal investigator Thomas Haine, a professor in the Morton K. Blaustein Department of Earth and Planetary Sciences at Johns Hopkins.

In addition to shedding light on ocean currents and their characteristics and behavior, the project has a technical goal: to build software that allows other researchers to exploit peta-scale supercomputers for science.  (“Peta” in peta-scale means 1 followed by 15 zeros; so “peta-scale” means 1,000,000,000,000,000 calculations per second and 1,000,000,000,000,000 numbers stored. That’s like everyone on the planet doing 100,000 different sums every second, and having a telephone directory of numbers that isn’t two inches thick but stretches all the way around the Earth.)

“Traditional scientific inquiry is being revolutionized by computing, and scientific computing and numerical simulation are becoming so important that they actually rival laboratory experiments and mathematical theory as tools for new progress,” Haine said. “There is an urgent national interest in designing, building and operating the biggest, fastest computers on Earth, and the group funding us and our circulation project is one element of this race.”

The present-day observations of the ocean (done by satellites, ships and robotic instruments) have large gaps between them, in space and in time. The team will view the high-resolution computer simulations in the same way that the present-day observing system views the real ocean. Comparing this sparsely sampled view with the fully resolved computer results will allow scientists to see those phenomena that the real observing system captures, and those that it misses.

According to Haine, simulating ocean currents is challenging for a number of reasons. One is that ocean basins have highly complex, irregular shapes, and it is imperative to get those details right in order for the calculations to be accurate. Another is that ocean currents interact in multifaceted ways with other components of the Earth’s climate system, including the atmosphere and the cryosphere (the portions of the Earth that include ice, snow cover, glaciers, ice sheets and caps and permafrost).

“Even though ocean circulation equations have been known since the 1880s, there is still a remarkable opportunity to make discoveries about how turbulent currents interact and evolve,” he explained. “By understanding circulation better, we can understand how other geophysical fluids work, too, like the Earth’s core, or Jupiter’s red spot or the sun’s photosphere.”

Haine’s team’s investigations are among the 380 stimulus-funded research grants and supplements totaling $192 million that Johns Hopkins has garnered since Congress passed the American Recovery and Reinvestment Act of 2009 (informally known by the acronym ARRA), bestowing the National Institutes of Health and the National Science Foundation with $12.4 billion in extra money to underwrite research grants by September 2010. The stimulus package—which provided $550 billion in new spending, including the above grant—is part of the federal government’s attempt to bring back a stumbling economy by distributing dollars for transportation projects, infrastructure building, the development of new energy sources and job creation, and financing research that will benefit humankind.

As of March 15, 120 staff jobs have been created directly at Johns Hopkins from ARRA funding, not counting those saved when other grants ran out, and not counting faculty and grad student positions supported by the ARRA grants.