Trophies in bloom for spring teams 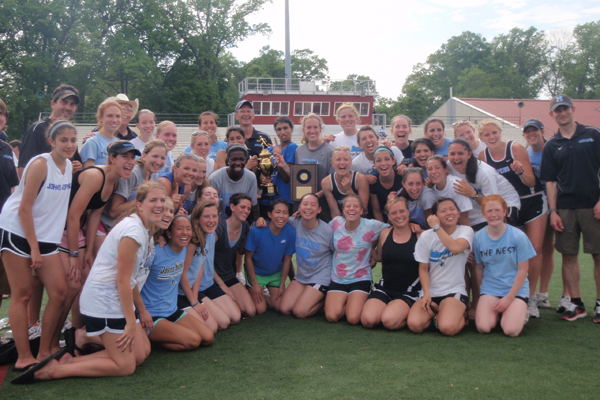 The calendar flipped to May and titles began to pop up like tulips for the baseball, women’s track and field, and men’s and women’s tennis teams.

In whirlwind fashion, Johns Hopkins celebrated four Centennial Conference championships in one thrilling four-hour period on Sunday, May 2. Three of the squads now have national titles in their crosshairs.

The baseball team continued its banner season with a 13-6 win over Haverford in the championship game of the Centennial Conference Tournament, held on the Homewood campus.

The victory cemented the fourth straight conference title for the Blue Jays, who are currently ranked No. 1 in the American Baseball Coaches Association and D3Baseball.com polls. They also earned the Centennial Conference’s automatic qualifier into the NCAA Tournament, which will start May 19.

The team had a 38-3 record going into the weekend’s season-ending doubleheader versus Salisbury and went a perfect 21-0 against Centennial Conference opponents. The Blue Jays’ current winning streak of 31 games is the second longest in school history. The 2004 team won 33 consecutive games.

While the baseball team is a perennial powerhouse, the women’s track team is building a new tradition of excellence.

In the 2010 Centennial Conference Women’s Track Championships, held in Swarthmore, Pa., Haverford College sought its fifth straight outdoor title and 10th straight overall track championship—indoor and outdoor combined. The underdog Johns Hopkins squad would have something to say about that.

The Blue Jays secured their first conference title in school history as they edged Haverford 190-185 in the final team standings. Johns Hopkins held off the heavily favored Haverford team, which roared back from a huge deficit.

The big moment came in the 5,000-meter run, the second-to-last event. Down by eight points, the Johns Hopkins trio of senior Laura Paulsen, freshman Liz Provost and sophomore Cecilia Furlong had to face off against Haverford’s Emily Lipman, the reigning conference cross-country champion. The JHU runners grabbed three of the top five spots in the event, with Paulsen taking first with a time of 17:58.30.

The team next needed to finish no worse than eighth in the nine-team field in the 4×400. The foursome of freshmen Amelia Vallenilla and Leah Sibener, sophomore Stephanie Chung and junior Anita Mikkilineni clocked in at 4:03 to place sixth and secure the title.

Paulsen was named the meet’s Outstanding Track Performer after claiming her third individual title of the weekend with a first-place finish in the 1,500-meter run.

The title caps a storybook year for the track and cross-country teams under head coach Bobby Van Allen. The team claimed the Centennial Conference women’s cross country title in the fall and finished second at the CC Indoor Championships in the winter.

The Johns Hopkins women’s team blanked visiting Swarthmore 5-0 in the title match of the 2010 Centennial Conference Championship to win its fourth straight title. The feat is one shy of the record five consecutive titles held by both Franklin & Marshall and Swarthmore.

In singles action, freshman Candace Wu quickly pushed Hopkins’ lead in the match to 4-0 with a 6-0, 6-1 win. Freshman Nandita Krishnan then closed out the match with a 6-0, 6-0 win over her opponent. With the match already decided, the remaining rematches were halted. The Blue Jays are now 3-1 all-time in the Centennial Conference Tournament against the Garnet, including a 3-0 record in the title match.

With the win, Hopkins earns the Centennial Conference’s automatic berth in the NCAA Tournament and will learn its postseason fate today with the announcement of the NCAA bracket.

The magical day was capped off by the men’s tennis team, which bested visiting Swarthmore 6-0 in the Centennial Conference finals to win its fourth straight trophy and fifth in the last six years. The Blue Jays improved to 20-5 on the year, a new single season wins record.

Hopkins swept the doubles matches to take a 3-0 lead on the hot and humid day in Baltimore. Sophomore Warren Elgort and junior Ryan Rauck gave the Blue Jays a 1-0 lead with an 8-4 win. Senior David Maldow and junior Andrew Wang then defeated their opponents 9-7. Sophomore Jacob Barnaby and junior Casey Blythe closed out doubles play with an 8-6 win.

In singles play, Maldow dropped just three games in a 6-1, 6-2 win to push Hopkins’ lead to 4-0. Elgort and freshman Andy Hersh then claimed simultaneous wins to clinch the match. Hersh tied Wang and Blythe for most singles wins by a freshman in school history. The victory for Maldow, the winningest player in program history, was the 80th of his career.

The men also earned an automatic berth to the NCAA Tournament.

Tom Calder, director of Athletics, said that he was able to witness firsthand three out of the four titles, bopping from the baseball diamond to the tennis courts.

“And I was in constant contact with the track coach. We were texting each other, and then I got the good news from him that we won,” Calder said. “I was also able to watch the women’s lacrosse team beat [No. 17–ranked] Ohio State on Homewood Field that same Sunday. It was a really, really good weekend.”

Calder, who has been at the university for 21 years, called the day a rarity.

For more information on the Blue Jays’ postseason plans and upcoming schedule, go to www.HopkinsSports.com.