Exhibit runs through Oct. 24 as part of guided museum tour. 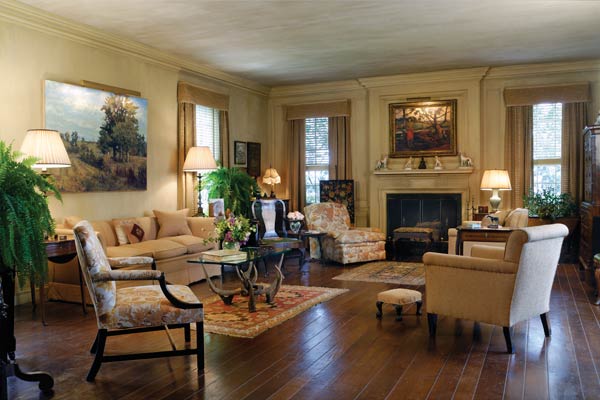 Design elements of this living room created by Billy Baldwin ca.1939 will be featured in the exhibition ‘Baltimore’s Billy Baldwin,’ opening May 20 at Evergreen Museum & Library. Photo: Michael Koryta

The exhibition—the first to celebrate Baldwin’s influential five-decade career—opens with a reception from 6 to 8 p.m. on Thursday, May 20, and runs through Sunday, Oct. 24, as part of the guided museum tour.

The second installment in the museum’s Modernism at Evergreen exhibition series, Baltimore’s Billy Baldwin features approximately three dozen works of furniture, textiles, paintings, drawings and photographs that illustrate Baldwin’s evolution as a decorator while defining his hometown as a lifelong touchstone for design inspiration.

Installed in the North Wing Galleries, the exhibition is organized around vignettes representing three of Baldwin’s most important Maryland commissions: rooms he created for friend Harvey Ladew, the artistic Voss family and the Baltimore Museum of Art. Spanning three decades, these very different interiors illustrate Baldwin’s maturation as a designer and show the influences of modernism and Technicolor Victorian revivalism of the 1920s and 1930s, which inevitably gave way to a sophisticated and comfortable post–World War II sensibility.

“Baldwin introduced a more relaxed and practical interior design sensibility, with guiding principles that could be followed by anyone and that still are today,” said James Archer Abbott, director and curator of Evergreen Museum & Library. “His evolution as an innovator in designs for everyday living makes this exhibition particularly memorable.” Abbott organized the exhibition with three Peabody Conservatory doctoral students enrolled in his spring seminar in the Krieger School of Arts and Sciences’ Museums and Society Program.

Known for his Southern charm, the dapper designer created interiors for some of the world’s wealthiest and most celebrated people of his time. The Duke and Duchess of Windsor, composer Cole Porter, actress Greta Garbo, former first lady Jacqueline Kennedy Onassis and fashion doyenne Diana Vreeland were just a few who sought his exuberance and expertise.

Born in 1903 to an old Baltimore family in the fashionable “streetcar suburb” of Roland Park, Baldwin briefly studied architecture at Princeton and then grudgingly sold insurance in his father’s agency before making the leap into hometown decorating. The personal dance partner of Evergreen’s Alice Warder Garrett after their introduction in 1925, Baldwin found a great reference for his developing style in the Garretts’ Greek Revival residence, which provided an unrivaled tutorial in design and connoisseurship. “Evergreen had opened up a whole new world to me,” remembered Baldwin years later. “There I met many internationally celebrated people; there I was surrounded by the best art and music, as well as conversation. I knew I could never return to the life I had led before.”

By 1935 Baldwin’s work had caught the eye of influential New York decorator Ruby Ross Wood, who implored him to join her. “I feel I need a gentleman with taste and I have found him in you, wasting away in Baltimore,” she said. “We must get you away from there as fast as we can. There is obviously no work for you there.”

Baldwin moved to Manhattan and, after Wood’s death in 1950, branched out on his own, increasingly going out on the limb of “simplicity in every way.” Near the end of his life he wrote, “No matter how taste may change, the basics of good decorating remain the same: We’re talking about someplace people live in, surrounded by things they like and that make them comfortable. It’s as simple as that.”

Baltimore’s Billy Baldwin and its accompanying illustrated publication are made possible by the Richard C. Von Hess Foundation.